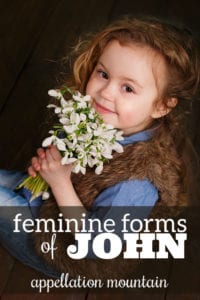 It figures there would be dozens of feminine forms of John.

After all, John is a classic, an evergreen name from Biblical times to the present day.

As it traveled through time and place and language, John morphed and transformed. There’s the man of action Jack, surname Jackson, and dozens of forms that aren’t obviously linked to the original – Sean and Ian and Jovan, anyone?

That’s why we have to talk about feminine forms of John. The list comes packed rich with potential, whether you’re honoring a grandpa John or just looking for a name that strikes a balance between classic and less frequently heard.

Jane – Lady-like Jane has literary ties from Austen to Eyre, musical connections from “Sweet Jane” to “Janie’s Got a Gun,” and a tremendous number of real-world bearers.  It’s hard to go wrong with spare, sophisticated Jane.

Jean, Jeanne – In French, Jean is the masculine and Jeanne the feminine form.  In the US, both spellings were popular in the middle of the twentieth century for girls.  Jean made it as high as #12 in the 1920s.  Today you’re more likely to meet a newborn Harlow.

Joan –  French saint and national heroine Jeanne d’Arc is known as Joan of Arc in English.  In the US, Joan’s heyday was close to Jean’s peak – though Joan was the more popular, ranking in the Top Ten for much of the 1930s.  Mad Men’s powerful Joan Holloway Harris is another well-known Joan.

Sian – Properly spelled Siân and pronounced Shan or Shahn. It’s pretty close to Sean, another cousin of John. It’s also rarer than rare in the US, where you’re more likely to meet a girl named Sean.

Giovanna, Gianna, Giannina, Giovanetta – In Italian, the Latin Iohannes became Giovanni, with Giovanna the feminine form. It shortens to Gianna. But we elaborate it to Giannina and Giovanetta.  Jersey Shore alum Nicole Polizzi gave the name to a daughter in 2014. Gia is a possible short form.

Ivana, Ivanka – Plenty of Slavic men have answered to Ivan, from rulers to writers. Ivana is the most common feminine form. The -ka ending is a diminutive. As Annie is to Anne, Ivanka is to Ivana.

Jan, Jana, Janna – In Dutch and German, as well as Scandinavian and some Slavic languages, John became Jan. And Jan led to the feminine form Jana or Janna. In English, Jan can also be feminine, a nickname for Jana or any of the Jan- names on this list. The middle Brady sister is a famous Jan, and the reality television Duggar family includes a Jana.

Janet – Originally a medieval diminutive for Jane, Janet succeeded Jean and Joan as the most popular feminine form of John in the US, peaking in the 1950s.  This means the average Janet today is probably somebody’s grandmother. The name retains some Hollywood glamour thanks to Oscar-nominated actress Janet Leigh, and a certain familiarity thanks to singer Janet Jackson.

Janice – Another elaboration of Jane, Janice cannot claim medieval roots.  Nineteenth-century writer Paul Leicester Ford penned many a biography of the American Revolution, and also wrote fiction set in the era. In Janice Meredith, Ford imagined a lovely, well-born girl, daughter of a Tory, who falls for a revolutionary. Janice is converted to the cause, and lends a hand to Paul Revere and even George Washington. The book became a play in 1900 and a silent film in 1924. Janice’s rise to popularity tracks very neatly with the popularity of Ford’s story.

Janina, Janine, Jeanine, Jeannine – The endings -ine and -ina are popular ways to create feminine forms in many languages, so no wonder that plenty of versions can be found in use throughout recent decades.

Joanna, Joanne, Johanna, Johannah – One of the interesting ways that names morphed over the centuries was this: take a name, translate it into Latin, and then re-import it to the vernacular.  Johanna is more faithful than many forms, give or take an ‘h.’  Of course, the strong ‘Jo’ sound can also suggest that this name is a mash-up of Joe and Anna – but the letters don’t lie. Joanne peaked around the same time as Janet, while Joanna peaked in the mid-1980s, thanks to the Kool & the Gang ballad by the name.

Jeanette, Jeannette – Janet feels restrained compared to Jeanette, but they’re both formed by adding an -et/-ette ending.  There’s a singing chipmunk by the name in Alvin and the Chipmunks, and Montana’s Jeannette Rankin, the first woman elected to the US Congress.

Jolene, Joette, Joetta, Joelle – Any of the Jo- names can come from John. Like Joanna, on sound alone they might feel like more of a nod to Joseph. Joetta and Jonette are rare forms found in medieval English. Jolene is a twentieth-century creation immortalized by a Dolly Parton song. Joelle is probably best considered a feminine form of Joel. And yet they’re all part of the same soup that gives us so many feminine forms of John.

Johna, Johnna, Jonna – This could be the most straightforward feminine form of John, but how do you spell Johna?  In the twentieth century, they ranked this way: Johnna, Jonna, Johna, with the first two spellings ranking in the US Top 1000 at one point.

Jonelle, Jonette, Johnelle, Johnette – Unlike the Jo- names, these are more clearly meant to honor a John. They’re less popular than Johnna and company.

Jovana – In Serbian and Macedonia, John became Jovan, adding a ‘v’ to that classic name.  This makes Jovana another obscure European form of the name, and yet it feels wearable in our age of middle-V girl names.

Juana, Juanita – Juana was the name of a Castilian queen, and Al Jolson sang about “Juanita” – a diminutive form of Juana – back in 1923.  They’re Spanish forms of John, via Juan. Juanita was a mainstream pick in the 1910s through 1940s, when the name regularly charted in the US Top 100.

Seana, Shauna, Shawna – The Irish Sean inspired Sean, Shauna, and Shawna. The -awna spelling was the most popular, reaching the Top 200 in the 1970s. There’s also Lashawn, Lashaun, and even Leshawn, all of which saw some use for girls in the same era. Lashawn was the dominant spelling, peaking at #422 in 1972.

Asia, Joasia – In Polish, Joanna becomes Josia – which sounds sort of like Josha with a long ‘o’ sound. It’s a common diminutive form in Polish, where Margaret reduces to Gosia and Sophia to Zosia. Drop the J, and instead of Josia, there’s Asia – sounds like Asha.

Bevan – Bevan is a Welsh surname derived from John via ap Iefan – son of John. The popularity of Beverly probably makes Bevan feel feminine in the US, though it is slightly more popular for boys – and quite rare overall.

Hanna, Hana, Hannah – There are other origins for Hannah (the Hebrew version of Anna, meaning grace), and Hana claims roots in Japanese (meaning flower) and Arabic (meaning happiness). Spell it any way you like, and it might be short for Johanna or Johannah. So while they’re very distant cousins, Hanna and John might hang on the same family tree.

Iva – Another possible spin on Ivana.  I also find myself wondering if Ivy could fit on this list … certainly it would be a reasonable nickname for Ivana in English.

Jantine – A Dutch feminine form, very rare in the US, but an intriguing possibility for the middle spot.

Jenna, Jennie, Jenny – Ages before Jennifer was the #1 name in the US, Jenny and company were short for Joanna.  We don’t see them that way today, of course, but it doesn’t change the link.  Need proof?  Nineteenth century Swedish opera singer Jenny Lind was born Johanna.

Jessie – Just like Jenny predates Jennifer, Jessie was in use well before Jessica.  In this case, Jessie was a Scottish nickname for Jean. How, exactly?  I’m guessing it was a whispered-down-the-alley.  Other Scottish feminine forms of John include Teasag and Teasaidh. Sìne appears as a form of Jane, so the ‘s’ sound was there.

Nina – If Hanna comes from Johanna, then no surprise that Nina comes from Giannina or Janina or any of the -nina/-nine ending names.

Seonag – Back to Scotland for this feminine form of John, pronounced Shona.

Sheena – As in Easton.  As in The Ramones single.  As in the Irish equivalent of Jeanne.

Sinead, Siobhan – Can Sinead and Siobhan both be Irish feminine forms of John?  Probably.  Both count as traditional Irish names for girls.

Zhanna – This could be my very favorite name on the entire list!  It’s Russian. Take Jeanne, import it into the Russian language and Cyrillic alphabet, then export her again, and viola! Zhanna.

What’s your favorite feminine form of John?  Are there any others that should be on this list? 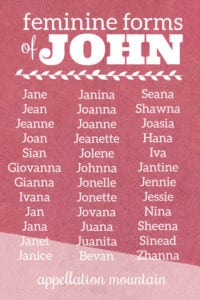 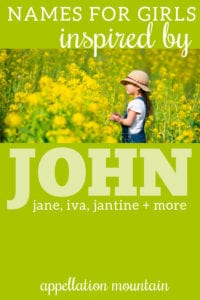