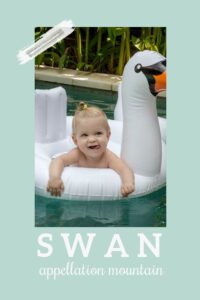 The baby name Swan takes us from modern YA romance to turn-of-the-century France.

Thanks to Len for suggesting our Baby Name of the Day.

Swans – the birds – are known for being drop-dead gorgeous.

They’re the supermodel diva of the avian world. Ducks are their cousins, but while ducks are approachable, mostly harmless little creatures – think Daffy or Donald – swans are more forbidding.

They feature in myths and legends aplenty:

The mute swan, found in Europe and Asia, is one of the oldest birds on record. Operas like Lohengrin and Parsifal are swan-centric.  The Ugly Duckling turns into a swan.  In many a story, the swan is mute only until death – at which time, he belts out an achingly gorgeous swan song.

Tchaikovsky’s ballet Swan Lake is based on a mix of Russian and German folk tales. It was first performed in 1877 – when it flopped. Since then, it’s become one of the best-known and most-performed ballets of all-time.

In Greek myth, the beautiful Helen of Troy was fathered by Zeus in the form of a swan. They’re also sacred to the god Apollo, sometimes depicted pulling his chariot.

The Children of Lir is an Irish legend about a wicked stepmother who turns her husband’s children into the birds until the curse is broken.

They’re important in Hinduism, and St. Hugh of Lincoln is said to have kept a pet swan.

Then there are swan maidens – a young woman who can take on the form of a swan, possibly thanks to a curse – in European folk legend. They’re also mixed up with the idea of prophecy.  “It swans me” is an archaic way of saying “I have a feeling.”

It’s also possible to “swan about.” It might mean moving in a dramatic, exaggerated fashion. Or it can suggest wandering aimlessly.

The more familiar phrase, though, is likely “swan song.” It signifies a final performance. And that takes us all the way back to those mute swans who, legend has it, sing only at death.

Black swans are associated with something rare. (Though they’re native to Australia, where they’re perfectly common.)

A 1942 novel called The Black Swan was about a swashbuckling pirate.

Then there’s the 2010 movie, the one about Swan Lake, with the good and virtuous ballerina who falls apart, caught in the roles of Odile and Odette. Natalie Portman won an Oscar for her work.

The baby name Swan might be rare in English, but it’s a familiar name element in Old Norse: svan.

It’s a character name in the ballet Coppelia – though that story centers on a doll. The historical record gives us women by the name, too, a mix of aristocrats and women religious.

The baby name Swan might be rare today, but that wasn’t always the case.

In some cases, those given names led to the use of the surname Swan.

Or maybe someone thought to be swan-like in some fashion would adopt the surname.

Lastly, if you lived near a house with the sign of the elegant bird, that’s a possible way to get the name, too.

Speaking of the surname, chances are you can think of two fictional women from recent decades who answer to Swan.

The baby name Isabella was well-established when Stephenie Meyer penned her YA winning tale of young (vampire) love. But Bella Swan’s maiden name never quite caught on.

Then there’s Elizabeth Swann, the daring governor’s daughter in Pirates of the Caribbean. She goes from being a rebellious young woman to a capable – and sometimes ruthless – pirate king. But she also marries Will Turner early in the series, dropping her stylish surname.

Long before we met any of the characters from these fictional worlds, the French author Marcel Proust borrowed Swann for a character.

Proust’s masterwork, In Search of Lost Time (or Remembrance of Things Past) consists of seven volumes. The first is titled Swann’s Way.

It makes a case for the use of the baby name Swan.

Proust introduces us to Charles Swann, and we later meet his family. The name Odette – equally swan-centric – also appears in the story.

Here’s where it gets interesting: Swann, inspired by the character, has seen some use for both girls and boys in France. In fact, it was given to 400 boys in France in 2020.

How did a nineteenth century classic inspired a twenty-first century choice? Credit might go to 1984 film Un amour de Swann, based on the first volume of Proust’s tale.

Or perhaps a handful of notables were named for the movie, and they’ve taken the baby name Swann more mainstream.

Young actor Swann Nambotin is one; others are heard in France, too. The French-speaking world gives us female Swanns as well, like swimmer Swann Oberson, who represented Switzerland in the 2008 and 2012 Olympics.

In the US, we’d probably perceive the baby name Swan – or Swann – as feminine, thanks to our love of Robin and Wren and Raven.

But there’s a strong case for considering Swann – and Swan – masculine, thanks to the French-speaking parents’ experience.

In the US, however, fewer than five girls or boys received the baby name Swan in 2020. Double the N, and it’s even rarer.

What do you think of the baby name Swan? 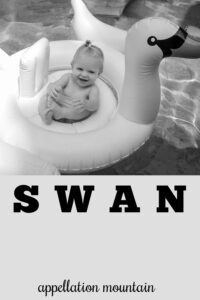