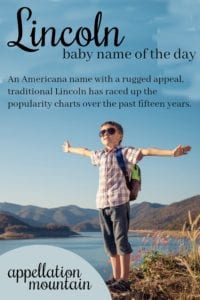 Lincoln makes for a very Americana name, even if it gets its start in England.

Our Baby Name of the Day comes from this list of fastest rising boy names.

Lincoln: On the Map

The Romans called it Lindum Colonia, but they weren’t the first to settle there. That happened way back around the Iron Age, in the first century BC. Back then, it was known as Lindon, which comes from a Celtic word for a pool or lake. (Dublin means black pool.)

Smoosh together the Latin styling of the original place name, and you’ll arrive at Lincoln.

It’s a cathedral city, and there’s a castle and a university there, too – but it’s not quite a household name, at least not outside of the UK.

Of course, that’s because the name immediately brings another figure to mind: the sixteenth president of the United States.

Abraham Lincoln led the country through the Civil War. Historians consider the chapter one of the darkest in American history, and credit Lincoln for his leadership.

A lawyer by training and a skilled orator, he won election to the presidency in 1860. In 1864, he was elected to a second term, but never completed it. John Wilkes Booth assassinated the president at Ford’s Theater on April 14, 1865.

He’s consistently ranked among the best US presidents, by both academics and the general public. In an age of presidential surname names, like Kennedy, Carter, and Reagan, no surprise that this one has caught on, too.

It’s not just children. We find his name everywhere. He appears on the penny, on schools and streets and public buildings. Illinois, where he began his political career, is called “the Land of Lincoln.”

Nebraska that named its capital city for the president

They Might Be Giants released a studio album titled Lincoln in 1988. I always assumed it was named for the Nebraska city, and that’s half right. It also acknowledges the duo’s hometown in Massachusetts – which was named for the city in England.

And that’s the curious thing about this name.

Lincoln: Other than Abe

Well before Honest Abe went to Washington, there was a Revolutionary War general with the surname, for whom several cities are named. There’s also an Earl of Lincoln in the British peerage, and at least one place on the map honors the aristocrat.

So even thought it feels very twenty-first century, we can find plenty of men with the first name Lincoln over the years. In fact, it appears in the US Top 1000 nearly every year back to 1880. (Had dated been compiled during the years of Lincoln’s election and then following his tragic death, I suspect we’d see a clear spike in use.)

There’s also a civil rights activist, an Arctic explorer, a journalist, a handful of politicians, and a few athletes over the years.

The popular building toy, Lincoln Logs, were first sold in 1918. The inventor? Architect Frank Lloyd Wright’s second son, John. It’s not clear what inspired the toy’s name, though the president is a possibility since he was born in a log cabin.

Henry M. Leeland named his line of luxury cars for the sixteenth president. Lincoln Motor Company eventually became part of Ford. You could drive a brand new Navigator, Continental, or Town Car off the lot today.

After years of sparing use, Lincoln leapt between 2004 and 2006, nearly tripling in use.

The television series debuted on Fox in August of 2005. Lincoln Burrows has been sentenced to death for killing the brother of the US Vice President. Except he’s been framed by a powerful cabal, part of an elaborate conspiracy. His brother, Michael, knows he’s innocent, so he intentionally gets himself sent away to the same maximum security prison. Spoiler alert: the two, along with six other inmates, successfully escape.

Credit also goes to the many similar names so in favor: Logan and Landon climbed in the same era. So did London and Layton.

An uptick in interest about the president helped, too. Steven Spielberg directed a 2012 biopic starring Daniel Day-Lewis, racking up plenty of nominations and awards.

Teen Mom 2 star Kailyn Lowry gave the name to her younger son in 2013.

If you know your Nickelodeon animated series, you might think of Lincoln Loud, of The Loud House, and his ten sisters: Lori, Leni, Luna, Luan, Lynn, Lucy, Lola, Lana, Lisa and Lily.

And then there’s The 100, a post-apocalyptic CW series responsible for pushing Octavia into wider use. Her love interest from the early seasons? Lincoln. We eventually learn that he’s from an area near the ruins of Washington DC – we even see the remains of the president’s memorial at one point – which explains his name.

Both the cartoon and the drama debuted in 2014.

All of this makes the name feel traditional and trendy at once, a name that could appeal to reality television junkies and high-minded history buffs alike.

What do you think of Lincoln? Would you consider the name for a son?