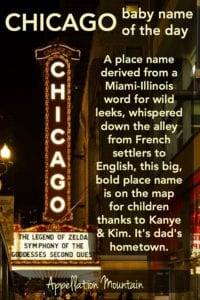 Could Chicago join London and Savannah as go-to place names for babies?

The newest Kardashian-West arrival prompts this bonus Baby Name of the Day post.

Some place names pop up all over the map. There are Jacksons galore, more than one Astoria, and so on.

It comes from the Miami-Illinois word for a wild leek – shikaakwa. The French transformed the word into chicagoua and such. Eventually, Robert de LaSalle, a French explorer, referred to the whole town as Checagou.

By the late 1600s, the city’s name was sealed, even though it would be nearly a century before Jean Baptiste Point du Sable arrived and became the first permanent non-native settler. (It’s not clear where Du Sable was born – some accounts claim he was French-Canadian; others give it as Hispaniola.)

For many years, the city boomed. It linked the country via canal and railroad; manufacturing expanded.

In his 1914 poem, Carl Sandburg called it “City of the Big Shoulders” and “Hog Butcher for the World.”

It remains the third most populous city in the US, a sort of capital of the mid-West, home to Wrigley Field, Barack Obama, and the shores of Lake Michigan.

A 1926 play inspired a smash-hit musical set in the city. Despite not debuting until 1975, the story takes place in Prohibition-era Chicago, featuring the murderous Roxie Hart and Velma Kelly, plus limelight-loving attorney Billy Flynn.

It became a Broadway hit in the 1970s, and the revival fared every bit as well. So did the West End debut and revival. The 2002 film won the Academy Award for Best Picture.

Even if you’ve never seen a production, I can almost guarantee you’ve heard a snippet of “All That Jazz.”

If the poem or the play doesn’t immediately come to mind, you might think of other music.

Frank Sinatra called it “My Kind of Town” in 1964; a few years earlier, he’d called it “that toddlin’ town” in another single.

In the late 1960s, a band formed in the city took the name Chicago Transit Authority before shortening to just the place. They recorded a string of hits through the 1970s and into the 80s. In 2016, the band was inducted into the Rock and Roll Hall of Fame.

Dozens upon dozens more come to mind, but there’s one that shoots to the top of the list.

Kanye West was born in Atlanta, but grew up in Illinois. He spent much of his childhood and high school years in the city and surrounding suburbs. The rapper refers to Chicago in multiple songs, including “Home” and “Homecoming.”

There’s no question where Kim and Kanye found inspiration for their youngest daughter’s name.

Many place names in vogue feel smooth and flowing – Savannah, London, even Aspen. But Chicago feels chunkier. It’s an unmistakable place name, with a big sound. But the entire category continues to grow, with names like Cairo and Alaska heard in recent years.

Chi-Town, one of the city’s many affectionate nicknames, suggests that Chi might be the obvious short form for a child by the name.

Even if you’ve never been, odds are that you can picture the city. It’s featured in dozens of movies and novels, television series and more. In some ways, it’s overdue for consideration. If Brooklyn can rise to the top of the baby name charts, why not Chicago?

Factor in our love of o-ending names for boys and girls alike, and this name feels surprising – but not so far out of the mainstream.

Actually, at least forty boys have been given the name since the mid-1990s. I’m not expecting a boomlet in babies with the name – I’d suspect this is more like Apple or Suri than Ava or Vivienne.

But it’s an intriguing possibility, fresh and novel, and certainly not one that any of us guessed.

What do you think of Chicago as a given name?