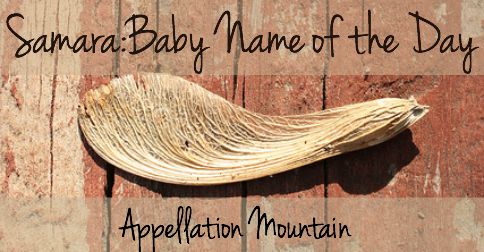 It’s a place name, a nature name, and a stylish alternative to the familiar Samantha.

Thanks to Emilee for suggesting our Baby Name of the Day: Samara.

Samara: From the Map

Let’s go back to the ninth century BC, when the city of Samaria stood in the mountains of the ancient Kingdom of Israel. The name seems to refer to the city as well as the mountains, though I’ve also seen them called Shomron – watch-tower, but the names seem to be interchangeable. The ruins are now part of an Israeli national park.

The city was eventually conquered by the Assyrian Empire. In 30 BC, Emperor Augustus gifted it to King Herod. It’s been known as Sebaste ever since. However, it was still Samaria when Philip the Evangelist preached there in the New Testament.

There’s a Russian city known as Samara, where the Volga and Samara rivers meet. It’s Russia’s sixth largest city. (That’s the flag of the oblast – the county – which is also known by the name.) The city traces its roots to the fourteenth century, but the name seems to come from a Bronze Age people who lived near the Volga beginning around six million years BC.

Maybe that’s because there are so many possible origins for this name, including: 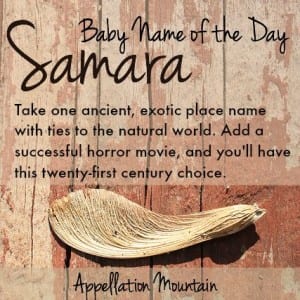 If you’re a fan of Frank Lloyd Wright, you might know that one of his more modest projects was a home for a professor at Indiana’s Purdue University. The home was named Samara, for the winged seeds that you probably know as whirligigs, helicopters, spinning jennys, or similar names.

Technically they’re winged achenes, a dry fruit with a wing that allows it to be carried far away from the parent tree. They’re found on elms, as well as other trees, but the name comes from a Latin phrase meaning fruit of the elm.

This makes Samara a subtle nature name, and one of the more feminine arboreal possibilities. While this name may have ancient roots, as a given name, it’s pretty novel.

What explains the name’s popularity?

A wildly successful scary movie: The Ring. It’s based on a Japanese movie, with a character called Sadako – a name with a rich story of its own. Sadako has supernatural abilities, and she’s created a video tape. If you watch it, the only way that you can save yourself is by making a copy within one week.

When it was remade in the US in 2002, Sadako became Samara.

Overall, this name feels like an intngguing option in 2015. It’s exotic, but shortening it to Sam – or Mara! – makes it wearable. And despite the popularity of The Ring, there’s history galore to make this choice very wearable for a daughter today.

What do you think of Samara? Do you associate it with the horror movie?