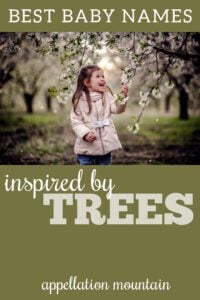 Poet Joyce Kilmer wrote I think that I shall never see a poem as lovely as a tree … and it is easy to understand what he meant.

Tree baby names fit right in with water-inspired choices like River and Ocean, floral choices from Violet to Rose, and animal kingdom options, like Wren and Bear.

So let’s take a look at some of the many tree names that might be exactly right for your child’s name – from the stylish and well-known, to the surprising, but still wearable.

This one brings to mind skiing, not trees. But of course, it was an abundance of aspen trees that gave the Colorado town its name. Tailored, outdoorsy Aspen fits right in with our interest in nature names nowadays, a frills-free choice that’s been gaining for girls since the 1990s. The spelling Aspyn also appears, usually on girls’ name lists.

A Top 100 staple from the 1890s into the 1930s, Hazel made her comeback right on time. Julia Roberts welcomed daughter Hazel in 2004, and John Kraskinski and Emily Blunt chose the name in early 2014. Factor in YA smash hit novel The Fault in Our Stars, and Hazel is flourishing.

Holly’s heyday was in the 1970s and 80s. Farther back, Holly saw occasional use for boys. Today it feels like a mainstream choice for a daughter, one born around the winter holidays, maybe, or just for parents channeling the glamour of Audrey Hepburn in Breakfast at Tiffany’s.

Is Juniper a tree or a bush? Yes. Some are tall trees, while others are rather shrubby. Juniper is Jennifer’s daughter, boosted by our affection for the sound – June and Juno are also quite stylish.

The downside is that plenty of people will mishear this name as Top Ten favorite Noah. Instead, Koa trees grow in Hawaii. The meaning – given as strong, brave, and warrior – is another bonus.

A nature name spin on the classic Laura and former favorite Lauren, Laurel combines a familiar, traditional sound with an unexpected -el ending. It’s probably that sound that explains much o the name’s appeal, rather than the laurel tree. Still, laurel wreaths were given out as awards in the ancient world, lending this name a certain boldness.

It reads more like Lily or Rose, but magnolias do grow on trees. It’s slightly Southern and a long, romantic choice for a baby girl born today.

Edible Olive feels a little like Apple, but of course olives grow on olive trees, in the Mediterranean and surrounding areas. Like Hazel, this name has been boosted by some high profile birth announcements – Isla Fischer and Sacha Barron Cohen have an Olive. So does Drew Barrymore. With Olivia a long-time favorite, tailored Olive makes a logical successor.

Anne Rice gave this name to the central figure in her 1990 novel The Witching Hour. Rice’s Rowan was a woman, but this name has become nicely gender neutral – slightly more popular for boys, but common enough for girls, too.

The first Willow was a brave farmer named Willow Ufgood in 1988 dark fantasy film Willow. But it never caught on for boys; instead, a few years later, it would appear on lists as a girls’ name. A television witch and a Pinkett-Smith eventually put this tree name on the map. Willow entered the US Top 100 in 2016, and continues to climb.

Like Koa, this one doesn’t immediately scream tree! But with choices like Amelia and Sophia so stylish, wouldn’t Acacia fit right in with other ends-in-ia names for girls?

With -r ending names for boys on the rise, no surprise that Alder is seeing some use. Alder feels more modern than vintage picks like Alfred and Albert. There’s also Adler, but that takes us from trees to eagles. Alder trees are associated with many things, but here’s one fun fact – alder wood is often used for the bodies of electric guitars.

It’s easy to think of Apple as another outlandish celebrity choice. Or just an edible name, akin to Olive or Sage. But apple trees are quite common in the US, making Apple a cousin to Willow.

You might think of Pokemon protagonist Ash Ketchum. But that’s not a bad association. It’s more clearly masculine than Ashley and a nature name, too.

If Rowan and Aspen work, why not Banyan? It’s the national tree of India, particularly significant in Hindu and Buddhist traditions.

A handful of boys have been named Birch dating back years. Maybe that’s because it’s a surname – nearly always related to the birch tree. Or perhaps it’s the tree itself, a deciduous tree, cousin to Alder and Hazel.

The spice we call “cinnamon” in the US is most often actually cassia. It’s a genus of flowering plants. Some are smaller, but most often, a cassia tree is mid-sized.

A tree name that feels familiar and unexpected at once, Cedar is gaining for boys and girls alike.

The name of a great plants, including trees, the cypress tree is richly symbolic, often said to mean life after death.

Fellow name blogger Swistle helped a couple with a daughter named Elm Elizabeth. They had a great story for their very unusual choice.

This Cornish word name is only worn by handful of girls in the US. But it shares sounds with Eloise and Elodie, and the tailored -en ending appeals, too.

A name borrowed from a fir tree might be especially suitable for a son born over the winter holidays. Fraser firs are one type of evergreen tree especially popular for Christmas. It’s also spelled Frasier, Frazer, and Frazier.

Hawberry and Whitethorn are non-starters, but how ’bout Hawthorn? The tree makes it a nature name, but it also reads as a literary one, thanks to the accomplishments of Nathaniel Hawthorne.

Hickory trees are found in North America and Asia. But the name sounds particularly American, perhaps because the name comes from a Native American word, possibly Algonquian, used to describe the tree’s nuts.

Spell it Lyndon, and this becomes a presidential pick, as in LBJ. But Linden is a tree, and it works for both genders. For girls, it is a successor to Linda, the equivalent of Laura-Lauren. For boys, it is yet another ends-with-n possibility – but one that’s far less common than many. Linden trees are typically called lime trees in the UK, though they’re not related to the citrus fruit in any way.

We tend to think of mahogany as a type of wood, and of course it is. Or maybe a color, that dark, rich shade of brown. But both come, of course, from the mahogany tree. It’s the national tree of both Belize and the Dominican Republic. f

Maple sounds like Mabel, but feels like a nod to Canadian heritage. Or maybe Maple is just another word that sounds like it ought to be a given name. From the red maple to the sugar maple, maple trees are common in North America, Europe, Asia, and northern Africa.

A generation of Harry Potter fans know that Moaning Myrtle haunts Hogwarts. But is this name really so different from Hazel? It might be an appealing alternative.

If Ash makes the list, why not mighty Oak? Oak tree-inspired names are gaining in the current US Top 1000, including Oakley (and Oaklee and Oakleigh), as well as Oaklynn and Oaklyn.

We can all picture a pine tree, but a baby named Pine? That might be more a stretch. Still, that could change with more children wearing tree names, and Pine has history as a surname – just think of actor Chris Pine.

A tree name, yes, but also an admirable Native American hero name, one that remains wearable for a son. Sequoia leans westward, and stands tall.

A tree name, one that’s seasonal and rather spiffy.

The Latin word for tree, Arbor also refers to a leafy, shaded spot in a garden. It substitutes nicely for Harper.

There is such a thing as a bay laurel, and it is a tree – especially in California, where it was a food source for Native Americans. Bay says “body of water” to most, or maybe “spice for cooking.” But regardless of your association, Bay is an undeniable nature name.

It sounds like a name, in the key of Christopher and Jennifer. Conifer refers to any cone-producing plant. Rare, but not unreasonable.

Ebony seems more like a color name than a tree name, possibly because it’s often heard in reference to the wood, rather than the trees that produce it.

Part-nature name, part-virtue, Evergreen might be too much as a first, but it feels perfect as a middle.

Before you say no way, consider this: Scandinavian heritage pick Leif is often pronounced just like leaf in the US. Leaf was also the birth name of Joaquin Phoenix, and a handful of other boys in recent years.

What better choice to appear on a list of tree names?

In Latin, silva means forest. There’s a cluster of names, including Sylvester, Silas, Sylvia, and Sylvie, sharing the same root.

It can mean to fall over, but Timber is also associated with trees. It’s more wearable than Bark, Trunk, or even Branch.

The yew tree features in more stories and legends than  many different types of trees. The Yew Dales are home to the Norse god of winter. Poets like Tennyson and TS Eliot mention yew trees in their works. And they were considered sacred to many European peoples, pre-Christianity. Maybe that’s why names like Yves and Ivo, as well as Iva and Yvonne have such long histories.

What are your favorite tree names? What’s missing from this list? 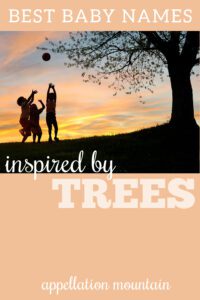 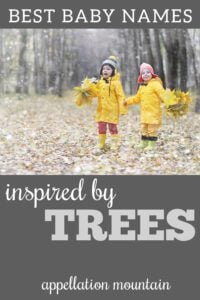 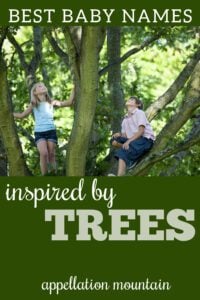