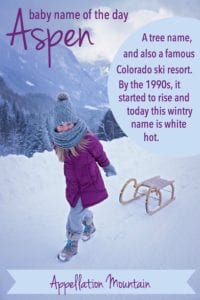 Aspen existed mostly on the map and in the forest until the 1990s. Since then it’s become one of the hottest of the winter girl names.

Our Baby Name of the Day works for a daughter born in the snowy season – or any time of year.

Aspen: Lovely as a Tree

You probably know this as a tree name. It actually refers to several species, found throughout the northern hemisphere.

The leaves tend to shake or tremble in the wind, thanks to their shape.

Here’s a fun fact: the root systems live much longer than the trunks. In Utah’s Fishlake National Forest, Pando grove appears to consist of tens of thousands of separate trees, but they all come from the same root system. Estimates vary, but it could be around 80,000 years old, putting Pando on the list of oldest living organisms. As for the name, in Latin Pando means “I spread out.”

The trees gave their name to a community in Colorado.

Initially founded as a mining camp, Aspen sits in the Rocky Mountains, along the Roaring Fork River. A silver boom brought people to the area, and when it ended, the settlement nearly disappeared.

But then came skiing. Chicago businessman Walter Paepcke established the Aspen Skiing Company in 1946, and developed the area for tourism. John Denver immortalized it in song. Celebrities vacationed there. Hunter S. Thompson once ran for sheriff.

Over the years, it became a mecca for the wealthy and now real estate is wildly expensive.

So we know that in the 1970s and 80s everyone knew the town’s name. But what pushed parents to consider it for their children?

Maybe it was just in the air. Dodge gave the name to a car model. Dan Fogelberg recorded a song by the name in 1975.

But those events come too late. Eight girls were named Aspen in 1973, the first year it registered in the Social Security data.

Maybe credit goes to John Denver’s 1971 song “Starwood in Aspen.” It was released on his fifth album, Aerie.

It’s not nearly as well known as Denver’s other hits, and it came early in his career. But it appears on his first Greatest Hits album, along with “Rocky Mountain High,” “Take Me Home Country Roads,” and so many other songs we’ve all heard countless times.

Starwood, as it happens, was the name of Denver’s home in the ski resort. Or, more precisely, the name of the development where he built the home.

The timing works. Denver is often credited with popularizing the mountain town, sparking the significance development that transformed it from sleepy community to world famous destination. It’s not a stretch to imagine a few parents considering the name for a daughter along the way.

Aspen: By the Numbers

While some claim it was stolen from the boys – and it could easily be unisex – the data shows that it didn’t register on the boys’ side until 1990, when eight boys were named Aspen. That’s ages after the name became well-established for girls.

That’s the same year Aspen Extreme hit the movie theaters. While not a cinematic masterpiece, it captures the romance of the resort. The story followed two guys who moved to Colorado to become ski instructors. If nothing else, it confirms that the name was very much in the public eye by the 1990s.

By then, parents had embraced place names and nature names. Autumn ranked in the Top 100. So did Savannah.

The name has risen steadily, climbing into the mid-300s.

My guess? It has much farther to climb. The current Top 100 includes Brooklyn and Willow, and names like River, Rowan, and London continue to appeal to parents. Like many of those names, Aspen’s nickname-proof quality will also satisfy many.

But for now, it’s a wintry name for a daughter likely to strike others as fresh and new.

What do you think of Aspen? Would you consider it for a daughter?