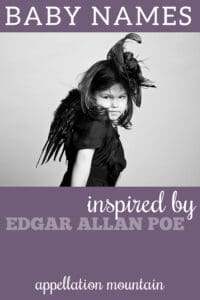 Edgar Allan Poe character names range from the familiar to the obscure. Some feel drenched in Gothic vibes, haunting characters doomed to tragic fates. Others aren’t quite so darkly romantic.

After all, Edgar Allan Poe was known for horror, but that wasn’t all he wrote.

Poe dabbled in humor and satire. And he penned detective fiction before the genre even had a name. C. Auguste Dupin, his crime-solving hero, inspired many a famous character, including Sir Arthur Conan Doyle’s Sherlock Holmes.

His characters, too, include household names, as well as rarities. And while some would be daring, even hard to wear, a few have reached the heights of popularity in the English-speaking world.

Others on this list aren’t directly borrowed from his characters, but still nod to the famous author’s legacy.

Poe didn’t feel the need to give a daring name to every person he created. In several of his best known works, like “The Pit and the Pendulum” and “The Black Cat,” the narrator and other characters go entirely unnamed. But when he did choose names, this is one author who tended to opt for the bold and dramatic.

Read on for a deep dive in Edgar Allan Poe’s character names.

A character in Politian, the only play ever written by Poe.

​”Annabel Lee” is the final poem Poe completed prior to his death, and one of his best known. The story of a young woman who dies tragically, it may have been inspired by the early death of Poe’s wife, Virginia.

A horror story that shocked readers at the time, “Berenice”

Along with her mother, Madame L’Espanaye, Mademoiselle Camille is one of two victims in “The Murders in the Rue Morgue.”

A lovely, romantic name, Eleonora is at the center of a short story. Once again, the beautiful woman dies tragically, but this time, there’s a happy(ish) ending.

In this poem, a man’s sadness ends when he marries the beautiful Eulalie. Poe was a fan of names featuring the letter L. It features in nearly every name on this list.

​Poe borrowed the name from Helen of Troy, though it was inspired by a real life woman named Jane.

A maid servant in Politian.

Another character from Politian. Before Poe, the poet Horace used it in one of his works. It comes from a Greek word meaning “to babble.”

Another young woman gone too soon, and another L name, too. Though this time, some speculate that Lenore is a nod to Edgar’s brother, William Henry Leonard Poe, who had also recently passed away.

The beautiful Ligeia dies tragically, only to come back to her grieving husband in a most unexpected way. In Greek myth, Ligeia is one of the Sirens.

In “The Fall of the House of Usher,” Madeline Usher is Roderick’s twin sister.

The name of another short story featured an ill-fated wife. In this case, it’s also their daughter’s name. While other influences are possible, Morel is another name for the poisonous plant also called Black Nightshade.

“The Raven” is arguably Poe’s most famous poem. Mentioned by The Simpsons, borrowed for the name of Baltimore’s football team, the bird is deadly wedded to our popular image of the writer. It’s popular as a girl’s name, too, though it’s never used that way by the poet himself. The woman’s name mentioned in “The Raven,” is Lenore.

Lady Rowena of Tremaine is the second wife of the narrator in “Ligeia.” Like his first wife, she shares a mysterious fate.

Set in “lonesome October,” the poem “Ulalume” is, once again, about a young woman who died too soon.

The Narrative of Arthur Gordon Pym is the tale of a young man who becomes a sailor, complete with mutiny, shipwreck, and more adventure. While the story was a failure in its day, it later influenced writers like Jules Verne.

In “The Murders in the Rue Morgue,” one of Poe’s detective stories, C. Auguste Dupin is the sleuth who solves the murders that stump the Paris police force. He goes on to solve several more puzzling crimes. He goes to appear in two more stories, including “The Purloined Letter.”

A name from Poe’s only play, Politian. It looks like a take on Balthasar, possibly influenced by the Italian Baldassare.

Despite his lucky name, Fortunato is the victim in “The Cask of Amontillado.”

A fictionalized account of the crossing of the Rocky Mountains, The Journal of Julius Rodman, remains unfinished.

An African-American servant in the short-story “The Gold-Bug.”

Not a person, but the only named creature in Poe’s grisly short story “The Black Cat.”

Is there any more obvious choice that the author’s surname? Maybe not, though Star Wars hero Poe Dameron makes it feel less specifically literary.

The wealthy Prince Prospero tries to outrun his fate, but it catches up to him “The Masque of the Red Death.”

Roderick Usher is the very last of the male line in “The Fall of the House of Usher.”

One of Poe’s early works, “Tamerlane” was inspired by Timur Gurkani, or Timur Lenk – hence, the Latinized version of his name. While the historical warlord really did live during the fourteenth century, the poem is a work of fiction.

Have I missed any Edgar Allan Poe character names? Would you consider any of these for a child? 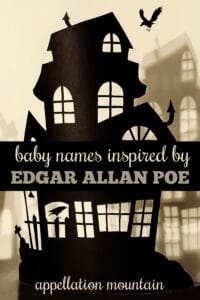 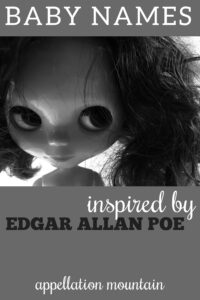