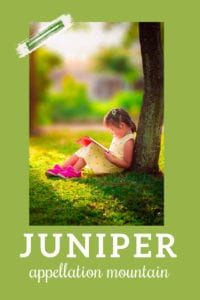 The baby name Juniper has gone from intriguing rarity to established favorite.

The Latin juniperus refers to a family of evergreen tress and shrubs. They grow in Nevada and Africa and the Himalayas, the Arctic and Tibet and beyond.

We’ve been borrowing names from nature for generations.

Ecovintage picks like Violet and Rose come to mind. But more modern nature names like Autumn and Skye have history now, too. The baby name Juniper sounds right at home with favorites like Willow and Hazel, Ruby and Luna.

Way back in the day, Saint Francis had a companion known as Fra Ginepro – Brother Juniper. We remember the thirteenth century monk for outrageous generosity, even taking the clothes off his back. He convinced others to give, too. It’s not clear if he was born with the name, or adopted it later in life.

In the eighteenth century, Miguel Jose Serra took the name Junipero when he joined the Franciscan order, in homage to Francis’ early follower. The Catholic church considers Serra a saint. (However, Serra’s legacy remains quite controversial. Religious leaders collaborated with the Spanish military. While some converts may have been devout – and voluntary – others may have been coerced.)

Thornton Wilder gives us a fictional Br. Juniper is his 1928 Pulitzer Prize-winning bestseller, The Bridge of San Luis Rey. It’s been adapted as a movie more than once. In 2004, Gabriel Byrne played the part.

There’s an intriguing artistic angle to the baby name Juniper. And this one makes it squarely a feminine name.

Harry Potter fans know that Ginevra is the full name of Ginny Weasley. It’s the Italian form of Guinevere, but it’s also associated with ginepro, the Italian word for juniper.

In a famous Leonardo da Vinci portrait of Florentine aristocrat Ginevra de’ Benci, a juniper tree is seen behind her. A Renaissance-era symbol of chastity, the tree might reflect de’ Benci’s virtues, but it’s also a play on her name.

The opposite side of the painting also features a sprig of ginepro, too. At least in Italian, there’s a long precedent for seeing the baby name Juniper as a feminine option.

So how did this name travel from Italy and a handful of male religious figures to the US?

For decades, it just plain didn’t.

Then in 1968, singer Donovan recorded a sweet single: “Jennifer Juniper.”

Fun fact: the song was named for Jenny Boyd, sister-in-law to George Harrison, future wife to Mick Fleetwood, and apparently, the subject of the singer’s affections. Jenny ran a boutique named – wait for it – Juniper.

The next year, five girls received the name. By 1974, that number reached 23 births.

It helps that the similar-sounding Jennifer topped the popularity charts during the same era.

A second boost came in 1993, thanks to the Johnny Depp and Mary Stuart Masterson rom-com Benny and Joon. Joon was short for Juniper. That’s also true for the heroine of the Junie B. Jones series, which debuted in 1992 and wrapped up in 2013.

It’s evolved from out-there rarity to mainstream favorite. With built-in nickname Junie, and a host of historical and cultural reference points for the name, the baby name Juniper feels like a fresh, modern choice that’s still rooted in the past.

That’s exactly what plenty of parents are seeking, an energetic nature name that will almost certainly continue to rise.

What do you think of the baby name Juniper?

First published on May 5, 2008, this was THE VERY FIRST featured Baby Name of the Day post on the site! 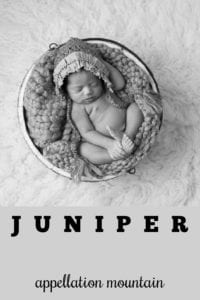