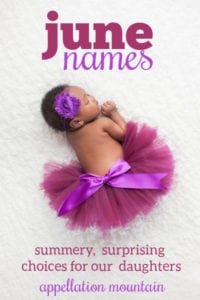 June names herald the official start of warm weather in the northern hemisphere, the long and lazy days of summer.

Some feel vintage and traditional. Others sound modern, unconventional, even daring.

And while every one of these June names shares the same sound, very few are actually related.

We find that great ‘oo’ in favorites from Lucy and Ruby to Julian and Jude. It’s romantic, rhyming with with moon and tune and clair de lune, bringing all sorts of delightful and gently antique images to mind. But there’s a lot of bouncing energy to these names, too.

Chances are that there’s a June name just for you.

Borrowed from the calendar, June refers to the Roman goddess Juno. But it doesn’t read like a mythological name. Instead, we think of June as a vintage charmer. June Cleaver was the mom on iconic 50s sitcom Leave it to Beaver. Meanwhile, June Carter Cash lends it a little bit of an edge. Reese Witherspoon won an Oscar playing Carter Cash in 2005 biopic Walk the Line. That helped spark a rise in the name’s use. After spending twenty years out of the US Top 1000, it returned in 2008, and has risen steadily since then.

Probably the quirkiest name on this list, Djuna comes from American writer Djuna Barnes. Her inventive father mashed up a character in a book – Djalma – with nuna, her brother’s baby-talk word for the moon. The D is silent – but if you’re drawn to Django, Djuna might appeal.

Drop the D, and Juna serves as a more approachable spelling. It’s more common than Djuna, but both names fall well outside of the current Top 1000.

Juneau comes from the capital of Alaska, taking this gussied-up spelling in a rugged, outdoorsy direction. Named for Joe Juneau, a Canadian-born prospector, the capital was almost named Harrisburgh, after another prospector – but it’s said Joe campaigned for the honor. As for his surname’s meaning and origin, it probably comes from the French word jeune – young. That’s the same root that inspired Juno, and, ultimately, June.

An ancient Roman rarity, Junia fits with ends-with-ia names for girls. The name appears in the New Testament, but has never been common in the US.

A logical nickname for any choice on this list, Junie brings to mind children’s book hero Junie B. Jones. (Fun fact: the character’s full name is Juniper Beatrice Jones.) Junie fits with sparky nickname names for girls, a sister for Sadie and Hattie. Scandinavian languages use Juni.

Way back in the thirteenth century, an earlier follower of Saint Francis was known as Brother Juniper – or Fra Ginepro, in Italian. His generosity was legendary. But despite his fame, this name tends to trend feminine. Maybe that’s because the Italian Ginevra is associated with juniper; or maybe it’s because Juniper sounds an awful lot like Jennifer. (The 1968 Donovan song “Jennifer Juniper” links them.) It debuted in the Top 1000 for girls in 2011, and hasn’t slowed down since.

As goddesses go, Juno is a warrior queen. She’s considered the equivalent of Hera, and like Hera, is the (sometimes jealous and vengeful) consort to Jupiter/Zeus. But Juno borrows other attributes from Athena, and often depicted in armor. Parents today probably think of hit indie flick Juno, from 2007, starring Elliot Page as a pregnant teenager. With that vibrant ‘o’ ending, Juno remains outside of the Top 1000, but continues to gain in use.

Do you have any June names on your list?  Are there any that I’ve missed? 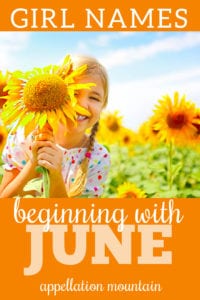 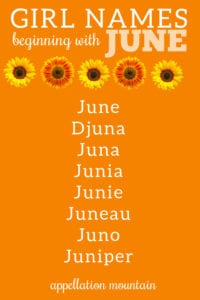