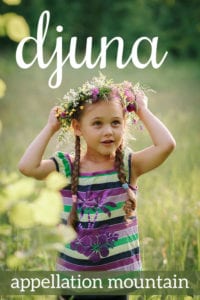 Djuna started out as a creative parent’s invention, but today it feels like a literary gem.

Thanks to Tracy for suggesting our Baby Name of the Day.

Back in 1892, Djuna Barnes was born on Storm King Mountain in New York state, north of New York City. She may have been the first-ever bearer of the name.

Barnes overcame poverty, limited formal education, and an arranged marriage to a man twice her age to become a prominent writer in the 1920s and 30s. She’s best known for her 1936 novel, Nightwood.

So where did her unusual name come from?

June wasn’t especially popular for girls in the 1890s. Neither were Una or Luna, though all three were in use.

Turns out her father invented it.

Years later, Djuna explained that her dad combined nuna – her older her older brother’s babytalk word for the moon – and a character in a novel – Djalma. Djalma + nuna = Djuna.

The novel she remembered was Eugene Sue’s The Wandering Jew. While it’s obscure today, it had been an international bestseller in the decades prior to Barnes’ birth. When Djalma is mentioned in the story, there’s much talk about how the name Djalma is unforgettable.

The author once said “If the name means anything, it means ‘the light of the moon.'”  I think that’s a poetic stretch, but she’s really the only one who can say.

The original Djuna had a niece named in her honor. You might expect a few fans to adopt the name.

But then something curious happened.

And then, in 1965, the name plummeted to 24 births. It’s remained obscure ever since.

What inspired all of those parents?

Nancy points out that 1964 was a good year for Dj names. Olympic legend Wilma Rudolph named her daughter Djuanna in 1964, and Djuana rose that same year, too.

My first theory: Djuna Barnes made her home in New York City’s Greenwich Village, in a little clutch of brick row houses known as Patchin Place. E.E. Cummings was her neighbor. In 1963, Patchin Place was slated for demolition to make way for high rises. Barnes successfully spoke out against the plans, and putting her back in the spotlight. The Greenwich Village Historic District was established just a few years later.

But the far more likely explanation? A fictional college.

In the fall of 1963, ABC introduced an hour-long drama called Channing, set at fictional Channing College. It centered on a professor, returned from the Korean War and working on a novel. The show ran for just one season.

The television appearance explains the spike, as well as the quick decline. As Nancy points out, it’s one of the biggest impacts for such a character name.

Plenty of other fictional characters have answered to the name.

Detective Ellery Queen employed a houseboy called Djuna, supposedly of Romani descent. Queen debuted in the late 1920s. At that point, Barnes had published several collections of poems and short stories, so it’s possible the authors were aware of the name. Romani-French jazz guitarist Django Reinhardt possibly inspired the name, too.

Anaïs Nin gave the name to a character in her 1950 novel The Four Chambered Heart.

In 1996’s Everyone Says I Love You, Woody Allen explored the life of an extended family in Manhattan. A young Natasha Lyonne played daughter Djuna, called DJ.

Myla Goldberg’s 2010 novel The False Friend introduces us to a little girl by the name who disappears.

None of these have proven familiar enough to push Djuna into the mainstream. In 2018, just six girls received the name.

If you’re crushed that names like Zora and Esme are too familiar, then Djuna might be just the thing. The silent D is offbeat, and there’s an adventurous, bohemian vibe to the name.

But it’s also relatively brief and complete, and perhaps easier to wear in our age of Juniper than ever before.

What do you think of Djuna? Would you consider it for a daughter?

Originally published on June 14, 2012, this post was revised substantially and re-posted on February 17, 2020. 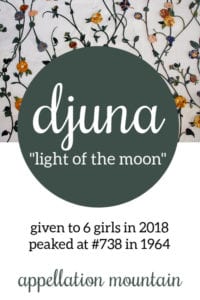