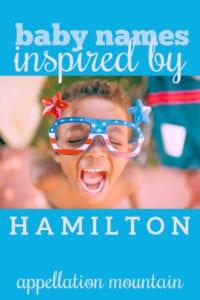 Will the hit musical-turned Disney Plus blockbuster bring a wave of Hamilton baby names?

After watching it five times, I’m half-ready to write Hercules Mulligan Sandel on a birth certificate. Given the widespread popularity of the new Disney Plus performance, let’s guess that the answer is definitely maybe.

The only question then, is which Hamilton baby names.

ONE THAT ISN’T CATCHING ON: HAMILTON

In early 2017, some predicted that the name Hamilton would rise quickly.

It fits with so many patterns: long like Sullivan and Harrison, with a sort of gentlemanly quality, like Montgomery.

Except … none of us want to call our children Ham. And the reference feels maybe too obvious.

So which Hamilton baby names remain? SO many!

If not Hamilton, how about Alexander? Both his last and first are repeated frequently during the musical. (Remember his name!)

Still, it could reverse course and return to the Top Ten. After all, the musical reinforces the name as a classic plus gives it a hip hop makeover. That’s a winning combination.

Sure enough, Alexander is now back in the Top Ten.

George feels very British – there’s the little prince, of course, and the Beatles guitarist. But in Hamilton, there are two Georges. There’s the mad king, of course, who appears on stage to talk about the break-up between England and its former colony. But more powerfully, the military commander turned first president is brought to life by Christopher Jackson in the musical.

Like all of the characters in Hamilton, Hercules Mulligan is based on a real figure. A tailor, his clients included many British officers – putting him in the perfect position to spy. His personal story is fascinating, but little known until recent years. As a given name, Hercules feels like much too much to live up to, but somehow Mulligan managed to do just that.

Daveed Diggs’ performance as “America’s favorite fighting Frenchman” earned him a Tony Award in 2016. He played Gilbert du Motier, Marquis de Lafayette – called only Lafayette in the musical, and, indeed, almost every where else, too. It appeared in the US Top 1000 into the 1950s. So while it’s never been mainstream, it’s got more history than you might expect.

Along with Mulligan, John Laurens is easily overlooked – perhaps because he died in battle at the very end of the war. But his friendship with Hamilton takes center stage in the musical, along with his opposition to slavery. His surname is a form of Lawrence. That makes Laurens an intriguing update to a classic pick – a little bit continental, with plenty of ends-in-s appeal.

Looking for a long neglected classic name ready for revival? Philip! The name of Hamilton’s eldest son (and father-in-law, Philip Schuyler), it’s a critical role in Hamilton’s life. As for the one-L or two debate, it’s a little like the number of Ts at the end of Elliot/t. The name is quite handsome either way. But Philip – single L – is slightly more popular today.

To a generation who grew up watching the Rugrats, Angelica Pickles – the spoiled, devious, occasionally cruel cousin to Tommy and Dil – probably defines this name. Until now. The eldest of the Schuyler sisters, intelligent and fierce, Angelica proves herself brave, selfless, and willing to fight for those she loves. It’s also a name that’s often repeated throughout the musical, locking it in parents’ minds.

The name Eliza has been musical theater royalty for decades. Just ask My Fair Lady and the unforgettable Eliza Doolittle, immortalized by Audrey Hepburn in the movie version. But now? Philippa Soo’s celebrated performance as Eliza Schuyler Hamilton takes it to a whole new level for this generation. Eliza continues to climb in use, the perfect combination of traditional and vibrant. After seeing the musical, parents might move this name even farther up their lists.

It takes us by surprise, but name pronunciations do change over time. Nina once sounded like the number nine; and Maria? It used to sound like Mariah. That’s the case in Hamilton. Alexander’s affair with Maria Reynolds damages his marriage and derails his political career. Until now, the name Mariah’s success has been tied to another singer: pop star Mariah Carey. Could Hamilton give us more girls who pronounce Maria-like-Mariah? Or a new generation of Mariahs?

Like sisters Angelica and Eliza, Peggy sings her introduction in Hamilton. She’s a less central character than the older two; she doesn’t appear in the second act. (In fact, she died in 1801, a few years before the Hamilton-Burr duel.) Her given name was Margarita, but that feels like a non-starter in the US these days. Instead, Peggy might be a great nickname for Margaret. Besides the Hamilton references, there’s Agent Carter of Marvel fame. It makes for a sparky, retro nickname with a lot of story.

There’s no Philippa in Hamilton. It’s the name of the actor who originated the role of Eliza. She spells it Phillipa Soo, but Philippa – one L, two Ps – is the more common spelling. Think Philippa – better known as a Pippa – Middleton. While lots of the actors’ names – Daveed, Lin-Manuel, Jasmine – could catch parents’ eyes, Philippa is one of those rarities that’s just waiting for the right spark.

Hamilton gives this name a built-in lullaby, sung by Aaron Burr about his newborn daughter. Her life story is equal parts fascinating and tragic. While the name has seen sparing use over the decades, Theodosia remains rare today. The more obvious Theodora is back in the US Top 1000, so maybe there’s hope. There’s been the tiniest uptick in the use of Theodosia since Hamilton’s debut.

Were you inspired by the musical to consider any of the Hamilton baby names? 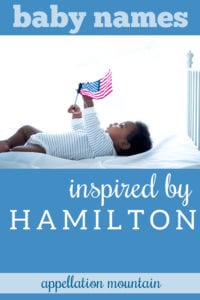