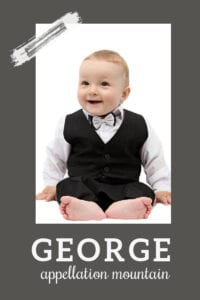 The baby name George belongs to a curious monkey, a pint-sized prince, and the face on the dollar bill. Oh – and it’s a very wearable classic for a son, too.

In Greek, Georgios means farmer, from the words ge – earth – and ergon – work.

But the first famous George wasn’t an earthworker at all. Instead, he was a soldier.

Legend tells he was a Roman, living sometime in the late 200s. Accounts vary, but George was a Christian in a dangerous time. When he refused to renounce his faith, he was martyred.

These stories emerged several centuries later. While we know that the Diocletian persecution in the year 303 specifically targeted members of the military, we don’t have any proof that George lived or died in the era, but it’s certainly possible.

But the reason the baby name George spread isn’t all down to the original story. Nope, there’s a second legend, one that nearly everyone recognizes. And it can’t possibly be true.

It’s said that George – while still a soldier – arrived at a village in Libya. The residents were paying tribute to a hungry dragon, a ravenous beast who graduated from devouring sheep to feasting on townspeople. The king’s own daughter was due to be sacrificed. Instead, George rode into town and slayed the dragon, ending all the horror.

The impressed townspeople converted to Christianity. (Or, in some accounts, George captured the dragon, and slayed it only after the residents converted.)

Either way, it’s a good story, the kind that spread widely in the Middle Ages. And since the dragon symbolizes the devil, well … even if it’s not literally true, it’s meaningful to people of faith.

Scholars note that similar stories occur in other traditions, and before Saint George, tales praised other saints for dragon-killing adventures.

But George is the one who we remember, and the one that makes the baby name George feel so valiant.

Given all this history, the baby name George became a classic. It’s been worn by kings in several countries, including five kings of England.

Saint George is also England’s patron saint – and there’s a story there that connects to an earlier ruler.

King Edward III ascended the throne in 1327. He had a special devotion to Saint George. After all, Edward was a young king who spent much of his reign at war with France.

In 1350, a much older King Edward III cemented George’s status as Patron Saint of England.

The first King George didn’t reign in England until 1714, and he was born German – the first of the Hanoverians.

Four more followed, including George III, who ruled during the American revolution.

King George V was the father of the current monarch, Queen Elizabeth II.

And, of course, young Prince George Alexander Louis of Cambridge is the firstborn child of Prince William, and presumably a future king himself.

So while the country of Georgia has had more kings by the name, and nations from Bohemia to Greece to Tonga have had their kings George, the name now feels decidedly British.

Of course, American history is rich with notable Georges.

General George Washington won the American Revolution against unlikely odds and went on to become the country’s first President.

We don’t have data to tell us whether parents named their son for the Founding Father. After all, the baby name George was common in colonial America. Six signers of the Declaration of Independence answered to the name – as many as William or John.

Just like nearly any classic with a long history of use, the baby name George has continued to feature in US history. George Bush and George W. Bush, father and son, both won the White House.

General George Patton was remembered for his success leading troops duirng World War II in Europe … and even moreso for his colorful language. George Marshall – general, Secretary of State and Nobel Peace Prize winner – is remembered for his work rebuilding Europe following the war.

From the 1880s into the 1930s, the baby name George was a Top Ten staple, along with evergreen choices like Joseph, William, James, and John.

There’s a good chance you might have a George on your family tree. And, even beyond saints, kings, and presidents, you can probably name a dozen Georges.

In the traditional nursery rhyme, Georgie Porgie kissed the girls and made them cry.

Other fictional Georges include:

George McFly is Marty’s dad in Back to the Future. It’s also the name of the dad in Mary Poppins and Peter Pan. And speaking of Peter Pan, the real-life George Llewelyn Davies inspired JM Barrie to create the character Peter.

Every Christmas, we remember George Bailey of the enduring It’s a Wonderful Life.

All of this makes the baby name George playful and accessible. Even optimistic.

But it might be the many musical references that make George musical – even rock and roll.

And maybe even George Strait pales in comparison to George Harrison, of The Beatles.

Or not. Because notable Georges can be found in every field of endeavor.

Athletes, too, are many – including World Heavyweight Boxing champ George Foreman. He named all five of his sons George. One of his daughters is Georgetta. (Several more girls escaped the Georgian naming machine.)

Speaking of fiction, there’s Game of Thrones creator George RR Martin. And that leads us to television and movies.

Speaking of Hollywood, actor George Clooney has been a leading man since the 1990s.

But despite the actor’s widespread fame – and acclaim – he hasn’t helped the name make a comeback.

And yet the baby name George just might be on the verge of a comeback.

And yet, during that same period, the baby name George entered the English Top 20, then the Top Ten … and now sits at #2.

Meanwhile, Americans are warming to the name, too. As of 2020, the baby name George is back to #133. It’s a modest improvement, but maybe it signals things to come.

After all, the 2013 birth of Prince George put the name on parents’ radar everywhere.

The question, of course, is whether parents will embrace the name or eschew it.

Royal names do occupy a special place in the celebrity baby name universe. Unlike actors, athletes, or musicians, it’s pretty much a lock that their parents are going to be famous into the future. And the children won’t retreat from the public eye as the grow older. On the contrary, we’ll see more of them as they’re able to make public appearances. At least for a kiddo in Prince George’s position, as heir to the throne.

So far, the prince doesn’t seem to have sent the name soaring – at least not in the US. But here’s what is certain: whether you’re a royal watcher or don’t get the phenomenon at all, the young prince is almost certainly familiar to you. That means that a great many parents now see George as a perfectly appropriate name for a child. (And perhaps for a  future child of their own.)

The logical George nickname, of course, is Georgie. It tracks with Charlie and so many other nickname names we love. But old school nickname Geordie could be even more appealing in our age of Theo and Jack.

Maybe the best way to describe the baby name George isn’t grand or regal at all. Instead, it’s approachable.

George is a solid citizen. He’s reliable and friendly, a classic name that can achieve great things.

With similar picks like Theodore and Henry topping the popularity charts, George offers many of the same qualities, all with a name your son probably won’t have to share.

What do you think of the baby name George?

Originally published on December 12, 2008, this post was revised substantially and re-posted on July 27, 2021. 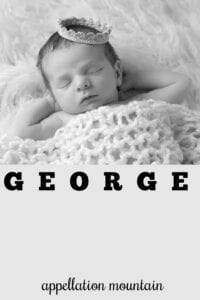