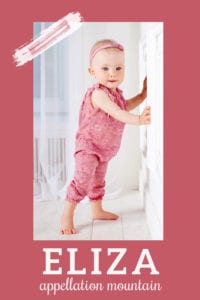 The baby name Eliza started out as an Elizabeth nickname. Today it stands on its own, a sparky, spirited choice that still feels plenty traditional.

Thanks to Lemon and Inbal for suggesting our Baby Name of the Day.

Few girl names remain in style as effortlessly as Elizabeth. Never out of the US Top 30, and rarely out of the Top 20, it is the rare name that appears in every decade. The nicknames change, but Elizabeth remains near the top.

Some of those Elizabeths have been Elizas.

Including the most famous Eliza of our moment …

Even if you’ve never seen the hit Broadway musical or the live version filmed for Disney+, chances are you’ve heard some of the songs from Hamilton: An American Musical.

Elizabeth Schuyler Hamilton – known as Eliza – grew up privileged and determined. She married Founding Father Alexander Hamilton, and played a pivotal role in his career and ensuring his legacy.

Oh, and she’s got a serious singing voice, too.

Erm, maybe. Whether the historical figure could sing or not is lost to history.

But we all know the famous trio thanks to their introduction song.

The baby name Eliza featured in a celebrated musical decades earlier, beginning in 1956.

When My Fair Lady opens, Professor Henry Higgins is bragging that he can teach any person to speak the most elegant English. His friend calls him on his boast, and soon Higgins is charged with transforming the churchmouse-poor, Cockney-accented flower seller Eliza Doolittle into a lady.

Not just a born aristocrat, either, but one who can fool Professor Higgins’ rival linguistics expert into believing she’s the real deal.

The Hollywood version, starring Rex Harrison and Audrey Hepburn, ends in triumph, with Eliza and the professor finding true love.

But when does the baby name Eliza first surface?

The Dictionary of Medieval Names from European Sources lists it in England during the 1500s.

It’s tempting to place it even earlier, thanks to the legend of the Biddenden Maids. Said to be born in the village of Biddenden, Kent in the year 1100, the maids were conjoined twins named Mary and Eliza Chalkhurst. They inherited land from their wealthy parents, and on their deaths, the land was sold to provide for the poor.

In any case, the names Mary and Eliza weren’t associated with the twins until much later – into the early 1800s.

A patriotic opera about Queen Elizabeth I of England bears the name Eliza. Written by Thomas Arne, it dates to the 1750s. In the 1790s, an unrelated French opera set in the Swiss Alps also used the name as its title.

Jane Austen used the nickname for one of the Bennet sisters in her 1813 masterpiece, Pride and Prejudice, though she’s also known as Lizzie.

Harriet Beecher Stowe gives the name to a character in her 1852 novel, Uncle Tom’s Cabin. She flees rather than see her young son sold to another owner.

It wasn’t until the 1990s that the name’s revival began.

Pop culture gave us a bunch of reasons to notice the baby name Eliza:

That means the baby name Eliza was already powering up the charts when Hamilton debuted off-Broadway in 2015, and became a Tony Award-winning sensation the following year. In 2016, the name ranked #174. It leapt to #140 the following year, and #119 as of 2019.

That, of course, was before Hamilton arrived on Disney+ in July 2020. It’s reasonable to guess that the baby name Eliza will rank in the Top 100 when the new data is released.

Classic and vivacious, the baby name Eliza hits the sweet spot. The z sound feels modern, and the sound fits right in with established favorites like Olivia and Sophia. With history to spare, Eliza has staying power. And while it requires no nickname, it retains many of the options associated with Elizabeth, like Ellie and Liz.

There’s every reason to expect this name will continue to climb.

What do you think of the baby name Eliza?