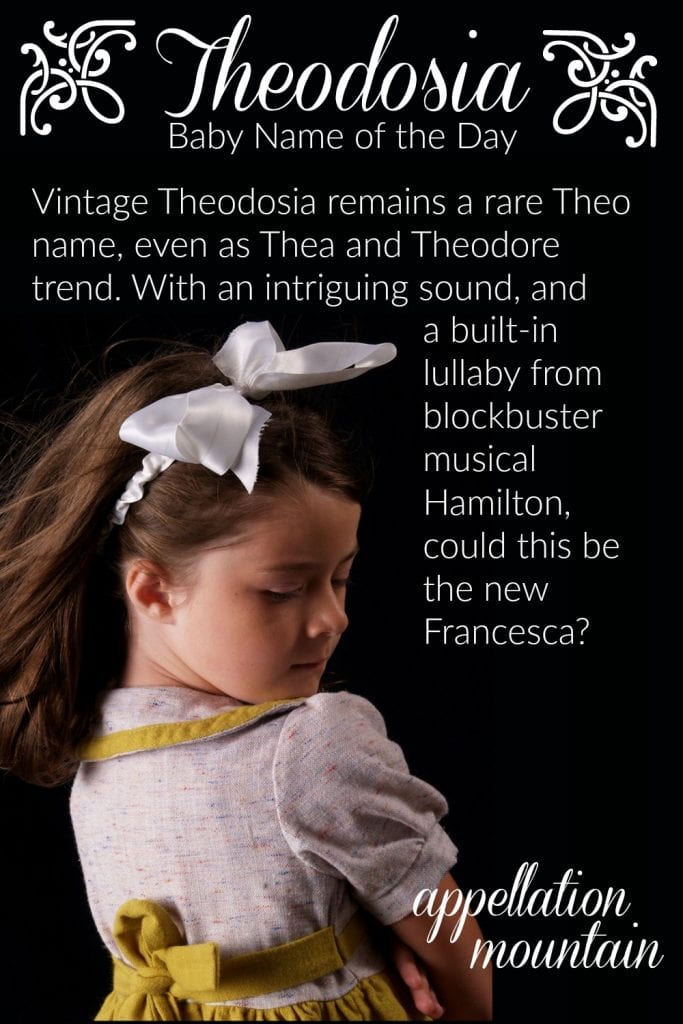 Theodosia remains rare, even as Theo and Thea prepare to take over the playground.

Thanks to Jerrika and Rachel for suggesting a our Baby Name of the Day.

Dorothy sounds like a spunky Kansas farm girl, complete with ruby slippers and a little dog, too. Flip the elements of the name, and you’ll find the more sophisticated Theodora. Theodora belonged to more than one empress, and even a saint.

Reach even farther back into the name archives, and you might stumble on today’s feature: Theodosia. Once again, the Byzantines give us royals and a saint by the name.

Remember 1988’s For Keeps? Molly Ringwald played Darcy, a high school senior who finds herself with child – ages before Juno. She and boyfriend Stan decide to raise their daughter themselves. But shortly after Darcy delivers, she falls into a deep depression.

As Darcy recovers, she learns that Stan has named their daughter without her:

Darcy: How could you name our baby Theodosia?
Stan: We needed a name for a the birth certificate …
Darcy: It sounds like a Greek fishing boat, or a crater on the moon or something!

It turns out the name came from a beloved aunt on Stan’s side. They eventually call her Teddy, and all ends well.

The name pops up sparingly over the centuries.

In The Royal Master, a 1638 comedy by James Shirley, it’s the name of the King’s sister.

During the late eighteenth and early nineteenth centuries, the wealthy heiress and Countess of Clanwilliam answered to the name. The countess was named for an aunt.

One reason the name might experience a revival circa 2017: Hamilton.

The smash hit musical history of the Founding Fathers focuses on Alexander Hamilton, and his arch rival, Aaron Burr.

Burr married Theodosia Bartow Prevost in 1782. A year later, they handed down her name to their daughter, but called her Theo. After Mrs. Burr’s demise, Theo became dad’s official hostess and remained loyal throughout the ups and downs of his political career.

In 1801, she married wealthy South Carolina landowner Joseph Alston. In 1812, she sailed aboard the Patriot from South Carolina to New York. The ship was lost at sea, and stories about her fate continue to this day.

But back to the early days, because Hamilton features a song called “Dear Theodosia,” a sweet lullaby from Aaron Burr to his newborn daughter. The same sentiments are echoed by Alexander Hamilton, singing to his new son, Philip.

A handful of other literary and historical figures answer to the name. There’s one that might come to mind: Theda Barra.

One of the twentieth century’s first screen sirens, Barra was born Theodosia Goodman. While she’s not as well-known as Marilyn Monroe or even Louise Brooks, Barra remains widely known.

Back in the nineteenth century, the name cracked the US Top 1000 a handful of times. As of 2015, however, were than five girls received the name.

Between the rise of the Theo- names, and our affection for Hamilton, doubtless a few parents will consider this long-neglected name. But for now, Thea remains the Theo name for girls to watch.

Do you prefer Thea, Theodora, or Theodosia?

This post was first published on November 23, 2009. Following substantial revision, it was reposted on April 19, 2017.