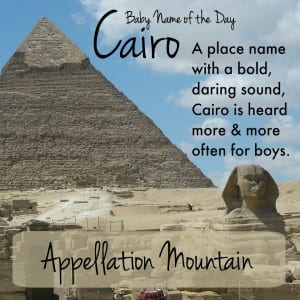 From London to Savannah, we’ve embraced place names for our children. Here’s another one borrowed from the map.

Thanks to a recent Facebook conversation about place names, our Baby Name of the Day is Cairo.

Many places names have obscure or debated roots. Not so Cairo. It was formally established in the tenth century as al-Qahira, which translates to the strong, the victorious, or possibly the defeater.

The victorious person in question was Caliph al-Mu’izz li Din Allah. al-Mu’izz moved the capital of the Fatimid Caliphate from modern-day Tunisia to Cairo.

What’s the Fatimid Caliphate, you say? It was quite the kingdom, stretching from the Red Sea to the Atlantic, including all of Africa’s Mediterranean coast. Cairo was at the center.

Since the city is near the Nile River, the land had been populated for centuries. The Romans built a fort there six hundred years before al-Qahira. And the ancient settlements of Memphis and Giza, as well as the pyramids and the Sphinx, are also nearby.

By the eleventh century, the Fatimid Caliphate was in decline, and the Crusaders were sweeping through the region. Neighboring city Fustat had been a powerhouse, but as the Crusaders advanced, the local vizier ordered the city burned to the ground in 1168. Cairo has been the undisputed capital of Egypt ever since.

While we tend to think of the desert and wonders of the ancient world when we hear Cairo, it’s a modern metropolis – with minarets. Nearly seven million people live within the city limits, and another ten million live in the metro area.

Political upheaval has been frequent in Egypt in recent years. In 2011, the Egyptian Revolution led to the resignation of president Mubarak. Two years later, a military coup d’etat removed president Morsi. The center for popular protests has been Cairo, keeping the city’s name in the headlines, and making it a little bit different than naming your child Paris or Brooklyn. There’s a subtle charge to Cairo.

Cairo: As a Given Name

Cairo appeals to modern parents for many reasons. It’s a non-Western name that looks to Africa, making it a possible heritage choice for many. Despite ancient roots, the name feels thoroughly modern.

I’m always reminded of the Chi-Rho – a sort of monogram for Jesus Christ and a symbol associated with Christianity in general. Earlier still, the Chi-Rho was an abbreviation for the Greek word meaning good. Ancient scribes used it to highlight a passage. Coins have been found with the symbol from three centuries before the birth of Christ.

In 2015, parents probably think of the popular name Kai, a Hawaiian name meaning sea, also heard as a diminutive in European languages.

A place name, a great sound, and lots of meaning – no wonder Cairo is on the rise.

Cairo: By the Numbers

But the numbers give this one to the boys. It’s been quietly catching on since the 1980s. Interestingly, the name has really climbed since unrest started in 2011. By 2014, there were 171 newborn boys called Cairo, along with 14 girls.

For now, that still means Cairo is outside of the US Top 1000. But that could change in the next few years.

If you’re after a name that feels ancient and modern at once, Cairo is one to consider.

What do you think of place names? Would you use a name for a place you’d never visited?