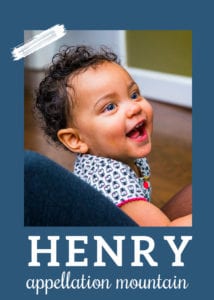 The baby name Henry proves that some choices can be both the height of tradition and the definition of stylish at the same time.

Our Baby Name of the Day comes from this list of classic boy names.

England’s Prince Harry was baptized Henry, too, with a mouthful of middles. (Charles Albert David, if you’re curious.) British royals have used the name steadily over the years, including eight kings of England, though the last reigning Henry is remembered most for his many wives.

Factor in plenty of other European monarchs, as well as a few saints, and this name occurs regularly in the history books.

Other influential Henrys include:

Keep digging, and you’ll discover a pirate, a member of the Thomas the Tank Engine universe, a folk hero, an animated monster, and dozens upon dozens more.

Like many a Germanic name, this one came to England with the Normans.

The French form of the name is Henri; in post-invasion England, it eventually became Harry.

For many years, Harry served as the preferred form in everyday life, even as Latin preserved the name as Henricus. It ranked among the most popular names in the English-speaking world throughout the Middle Ages.

Surnames from Hendrix to Harrison, Hendry to Henson to Hendrik also come from the many forms of the name as it traveled across Europe.

The Germanic original looked more like Heimrich, derived from the elements heim – home – and ric – ruler. It eventually became Heinrich. Other international forms include the French Henri, Italian Enrico, and Spanish Enrique.

The much-married monarch is familiar to nearly everyone. If not from a long-ago history class, then from pop culture.

Back in the 1960s, Herman’s the Hermits scored a hit with quirky “I’m Henry the VIII, I Am.” They sing it “en-er-ee,” Cockney style. The song dates to 1910, when comedian and music hall star Harry Champion first sang it.

Fast-forward to 2017, and a very different musical spin on the story debuted on stage. Six turned the story of Henry VIII’s wives into a pop concert, with each queen telling her story.

In between, we’ve seen The Tudors, Wolf Hall, The Other Boleyn Girl, and The White Princess on screens big and small, to name just a few.

That’s the kind of climb we sometimes associates with trendy names – think Mason or Jayden.

Except the baby name Henry is among the most traditional names.

Even if it hasn’t always been favored by parents, it would be tough to call the baby name Henry anything other than a true classic.

Today, given the name’s quick rise along with its status as a go-to for many stylish families, it’s that rare name that feels both timeless and perfectly of the moment.

Related names, like surname Hendrix and international Henrik, are attracting more attention, in part because of Henry’s success.

What sparked the name’s revival?

With so many famous figures, it’s tough to pin down the reason this name reversed course. But reverse course it did. After a long stretch as a go-to name for baby boys, it reached an all-time low in the 1970s and early 80s.

Prince Harry gave the name a bump – even in the US – following his 1984 birth. Kenneth Branagh’s Oscar-nominated 1989 adaptation of Henry V seems to have helped, too.

But it seems like the baby name Henry had simply hibernated long enough to feel fresh again. With so many boys called Andrew and Nicholas, Matthew and Daniel, Henry presented a traditional-but-different alternative. Henry rose along with traditional choices like Benjamin and Alexander.

Nickname Hank feels like a friend for Max and Gus, and a few daring parents have even used Huck as an alternative short form.

Henry feels smart and cool, a name that works for a small boy or a grown man of accomplishment. It feels timeless, as expected in a history book as it is on the playground.

If you don’t mind the possibility that your son will have to share his name with others, Henry feels like an unassailable classic with a serious cool factor.

Would you consider the baby name Henry? Or is it just too popular to make your shortlist? 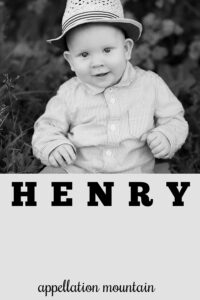 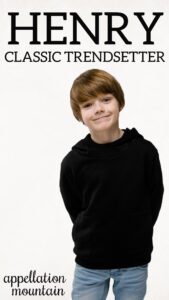