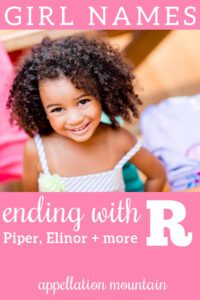 But they are freshly popular in recent years.

It’s true for our daughters and sons alike, with Carter and Connor, Alexander and Asher so popular, to name just a few.

There’s an equally wide range when it comes to girl names ending with R.

Literary surname Harper has reached the US Top Ten in recent years.

Word names, like Juniper and River, are catching on.

Certain surnames rank better for boys, while other r-enders seem reserved for girls, like Piper.

Read on for a round-up of girl names ending with R, from Top 100 favorites to obscurities no one is using – yet.

A handful of single-syllable names sneak on to this list. No question that Claire – in any spelling is classic, storied, and very much an R-ending choice for a daughter.

Strong and sensible, rich with nickname options, Eleanor has been worn of women of distinction from medieval France to twentieth century America. Spell it Elinor, and it picks up a sheen of Jane Austen heroine.

Most of us probably think The Scarlet Letter when we hear Hester, but it’s also the name of steampunk heroine Hester Shaw of Mortal Engines. Nickname Hettie is a bonus.

The name Leonor is to Elinor as Hester is to Esther – a rarer, related form. In this case, Leonor is the Spanish version, sometimes heard in the US. And Lenore is simply a shortened version of Eleanor, immortalized in Edgar Allan Poe’s The Raven.

Another Old Testament name, Tamar feels sharp and modern. But there’s a medieval queen of Georgia – on the Black Sea, not in the southern US – by the name. Now that Tammy has slipped into style limbo, maybe there’s room for r-ending Tamar.

Light and spirited, Adair is a Scottish form of Edgar, and a thoroughly overlooked choice.

Most of the girl names ending with R feature two syllables, but a few – like Blair – keep it brief. This has long been a favorite unisex surname style choice for our daughters, dating back to 1980s sitcom The Facts of Life with character Blair Warner.

A contracted form of Gregory, made famous – and feminine – by celebrated 1940s actor Greer Garson. Brooke Shields used the spelling Grier for one of her daughters.

Literary Harper surged up the popularity charts a few years ago, a fresh and modern choice rich with significance.

Originally a surname for one who went on pilgrimage – holding palms together in prayer – Palmer now sounds tailored, unisex, and unexpected.

Or Pfeiffer, Fifer, or Fyer, maybe? A musical surname with potential spelling challenges, Pfeifer is the less expected version of Piper.

Like Pfeifer, Piper one referred to a musician – one who played the pipes. Actor Piper Laurie put it on the list for girls way back in the 1960s. But it took Orange in the New Black debuting on Netflix to push this name into wider use.

Before there was Harper, everybody loved Taylor. Singer Taylor Swift was born in 1989, just as the name was nearing peak popularity.

At different points in time, being born on a major holiday could determine your name. So yes, children have been named Christmas and Easter. Today it sounds rather religious, but also optimistic. After all, Easter is the season of spring and rebirth.

A traditional feminine choice in English, also spelled Honor – and sometimes Honora and Honoria – this name is seldom heard in the US. It feels equally at home across the centuries.

Noor means light. The Arabic name can get mixed up with Eleanor and Nora, but it’s a separate name, distinctive and elegant, too.

It means pillar, yes. But Pilar is pronounced in Spanish with the emphasis on the second syllable: pee LAR.  It’s often given in combination with Maria, as in María del Pilar, referring to a vision of Mary standing on a pillar. So it’s religious – and strong, too.

This might be a straightforward nature name, since vesper is the Latin word for evening. But Vespers is also an evening prayer service in some Christian traditions, lending another type of meaning to the name.

A former favorite, Amber could be a smash hit today. Except, of course, most Ambers are the ones having babies themselves right now. Still, this 1980s favorite could fit right in on a playground now.

Asters are a showy plant that look a little bit like a star.  The surname Astor ultimately refers to a bird of prey.  Either way, it is a solid nature name, though one with more teasing potential than some.

A thorny, thicket-forming plant, Briar takes on a Disney glow thanks to Sleeping Beauty. When Princess Aurora is living in the cottage, she answers to the alias Briar Rose. That said, Briar sounds – and is – unisex, and a name with a certain toughness.

Long considered lucky, Clover makes a distinctive choice for parents thinking of their Irish heritage – or just wishing to embrace their good fortune in welcoming a daughter.

Nature name Amber is fading, but Ember is red hot – literally.  The glowing coals of a barbecue might seem like strange inspiration for a child’s name, but factor her similarity to Amber and Emily, and the beauty of a roaring bonfire and suddenly Ember seems like a natural.

The word for flower in French, Spanish, and English, of course. Flora and Florence are rising favorites, making all three of these R-enders seem more accessible.

Ginger suggests the most glamorous of the  Gilligan’s Island castaways, a spice, dancing sensation Ginger Rogers – born Virginia – and a Spice Girl, too. It’s one of those names that’s so far out, it’s in – and being one of the girl names ending with R helps.

A former favorite that remains both strong and downright pretty.

Hesper’s close cousin Vesper appears elsewhere on this list. Hesper is a poetic name for the evening star, as well as a name for the planet Venus. In Greek myth, the Hesperides were the nymphs living in Hera’s garden tended to the golden apples of immortality.

A bouncy, high-energy choice borrowed from the natural world.

A pretty shade of purple, and a flowering plant, too. Harry Potter fans will recognize this ends with R choice as a Hogwarts student.

River is rising for boys and girls alike. Of course, sci fi fans – of Doctor Who or Firefly – will associate it with feminine character.

Among the most solidly established of season names, the name Summer is as gentle and warm as the season suggests.

The hottest season name of the moment is this wintry nature name.

Borrowed from medieval romance, where Blanchefleur is the name of an innocent maid – literally, a white flower.

A deep shade of red sometimes called vermilion, cinnabar was long used to make luxury items, including dinnerware. Of course, it’s also the mineral from which we extract mercury – making all of those high-end items poisonous. But that’s in the past, and Cinnbar sounds like a surprising, but wearable, choice.

A Scandi name, Dagmar appeared on the fringes of the US Top 1000 way back in the late 1800s. If Astrid and Ingrid work for modern girls, why not Dagmar?

A goddess name less expected than Athena, and a borrowing from myth every bit as wearable as Penelope. Demetria has seen some use, as has Demi, but it’s R-ending Demeter that feels like the most intriguing new option.

Just like Linda and Lisa and Barbara and even Mary, Jennifer is former favorite that would be surprising on a daughter today.

Originally short for Christopher, Kester could be masculine. But it sounds like Esther-with-a-K. And nickname Kess brings to mind everybody’s favorite Tess.

It looks like a request for more lilies, but Lillemor is a Scandi rarity that means, more or less, “little mother.”

A modern Hebrew name used for boys and girls, Lior means my light – a name rich with meaning and a modern sound.

A French place name, Loire sounds a little bit like laWAHR in English. That’s not the most accessible sound, but it is pretty.

This color-metal-sometimes name isn’t often heard, but it has appeal in our age of Sylvie and Harper.

What are your favorite girl names ending with R?