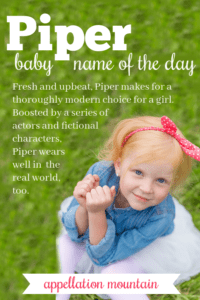 Piper has gone from daring rarity to mainstream darling.

Thanks to Kayt for suggesting today’s Baby Name of the Day.

In 2008, I wrote: Piper is one of those fabulous names, long underused, that is set to soar.

That’s certainly come to pass. But this name takes to the skies for another reason.

Since the 1930s, Piper Aircraft has been known for manufacturing small airplanes. Tens of thousands of aircraft manufactured by the company are still flying. The company was named for founder William T. Piper, Sr., known as the Henry Ford of aviation.

This puts the name in the company of Jett, and maybe nature names like Skye, too.

Originally, this started out as a surname for a musician who played the pipes. It ultimately comes from the Latin pipare – to peep. It’s imitative – an attempt to replicate the sound.

The name is on trend for so many reasons.

Of course, we don’t know the name of the most famous piper of all time. He’s the Pied Piper of Hamelin, a medieval legend.

The basic story goes like this: the German town of Hamelin has been overrun by rats. A musician agreed to rid the town of its pests for a price. He succeeded, playing his pipe to lure the rats to the river, where they drowned.

But the townsfolk balked, and refused to pay as promised.  So the stranger played another tune, and lured away all of the town’s children.

Scholars debate whether the tale has its roots in some real-life tragedy. But it lends another aspect to this name. It’s a sad story, of course, but I don’t think it’s a deal-breaker.

After all, plenty of other people have answered to the last name over the years, and the musical association is a strongly positive one.

We expect any surname to enjoy some use as a given name, especially for boys. But that wasn’t the case for Piper.

Instead, this one started out exclusively as a girl’s name, and it owes its creation to Hollywood.

Way back in the 1940s, Rosetta Jacobs signed with Universal Studios. Rosetta became Piper Laurie. Her career spanned decades, as she racked up Oscar and Emmy nominations from the 1960s into the 1990s. She’s still acting today.

Laurie’s unusual stage name inspired namesakes almost immediately. It was used in small numbers by the 1950s, and while it never really took off, it held steady through the years.

What explains the leap? In 1998, Aaron Spelling’s Charmed introduced us to the bewitching Halliwell sisters: Prue, Piper, and Phoebe. The WB series followed their lives in San Francisco, as they used their powers for good – and tried to keep it all a secret.

The series ran for eight seasons, plenty of time to take the name into wider use.

It helped that we were all about surname names for girls at the time. The US Top 100 in 1999 included Madison and Mackenzie, Taylor and Bailey.

Some credit goes to actor Piper Perabo, an early Laurie namesake. She played Jersey in Coyote Ugly way back in 2000, but her star turn came in 2010, when she starred as CIA operative Annie Walker in USA Network’s Covert Affairs.

But it was took another real-life woman with the name to take it into the Top 100. That’s Piper Kerman, the inspiration for Taylor Schilling’s character in acclaimed Netflix series Orange is the New Black. The prison comedy-drama has racked up tons of awards since its 2013 debut.

Strictly speaking, Piper cracked the Top 100 in 2012, a year before the Netflix series’ debut. But the name gained steadily in use in 2013 and 2014, suggesting the show deserves credit for much of the name’s success.

Even with Orange, Piper might’ve followed Harper and Penelope into wider use.

It has hit a plateau in recent years, but I still think this name feels fresh. Cool. It’s the kind of name that feels right at home today, as perfect for the early twenty-first century as Betty was for the middle of the twentieth.

It’s a solid choice for a daughter, feminine but tailored, with just enough history to keep from feeling made-up.

What do you think of Piper?  Will this name continue to rise?