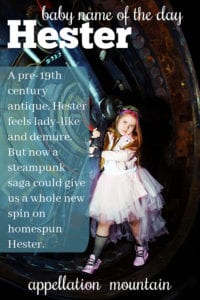 Hester once existed only in the pages of a Nathaniel Hawthorne novel. But know a very different kind of heroine answers to the name. In our age of Harper, could this choice rise again?

Our Baby Name of the Day is inspired by Mortal Engines.

Few names claim a single, dominant form across all of history. Elizabeth mixes with Isabella. It’s nearly impossible to untangle all the various forms of John.
We all recognize Esther as an Old Testament name. It may come from the Persian word for star – sitareh. Or possibly it refers to the goddess Ishtar. And some theories make it a botanical name meaning myrtle.

Meaning aside, Queen Esther is considered the protector of the Jews of Persia from way back BC.

The story goes like this: a king puts aside his wife. He decides to choose a new one through an open call, a beauty pageant of sorts. Esther wins ’cause she’s drop-dead gorgeous. Except she’s also Jewish, and there’s a kerfuffle between her community of birth and her new husband. All of the Jews are ordered put to death; Esther intervenes, using her wiles to convince her husband to spare her people.

All ends happily – for Esther and friends, at least – and the victory is commemorated as Purim every year.

It’s remained in use ever since, enjoying bursts of popularity, inspiring operas and the like. The most recent Esther boomlet in the US followed the birth of Esther Cleveland, former First Daughter. That’s more than a century in the past.

The H spelling seems to come from Biblical Latin, and then filtered into English.

Nathaniel Hawthorne chose the name for his main character in The Scarlet Letter. He wrote it in 1850, but set it two hundred years earlier.

While Hester Prynne stands accused of adultery, she’s not the villain. Instead, she carries herself with quiet dignity, and clearly loves her daughter.

Hawthorne’s novel remains widely read, so when many of us hear the name, Miss Prynne comes to  mind immediately.

For years, Esther ranked in the Top 100, with Hester 200 spaces or so behind. The names dropped together, too. But while Esther has never left the US Top 1000, Hester departed after 1950. The name hasn’t been heard from since.

The name languishes in obscurity. Besides Hawthorne’s character, there’s also:

Literature gives us a few others:

Just one more: Anne of Green Gables fans might think of Hester Gray’s garden, though Mrs. Gray has died some years before Anne discovers the place.

None of these older uses necessarily make the name feel more accessible today.

But lately, it’s started to surface in other contexts.

It tends to read English, and maybe a little bit posh. It’s the name of the author of The Little Lady Agency novels.

We learn that it’s the name of Frasier Crane’s mother on long-running television series Cheers and Frasier.

But it’s the edgier uses, the science fiction and fantasy ones that tip the name in a different direction.

In The Golden Compass, it’s the name of a rabbit daemon.

Libba Bray gave the name to a teacher in her Gemma Doyle trilogy.

And then there’s Fox’s comedy-horror series Scream Queens, which gave us a character by the name. Played by Lea Michele, this Hester turns out to be downright dangerous.

Mortal Engines, directed by Peter Jackson, is based on a 2001 Philip Reeve novel. It’s a steampunk adventure, set in post-apocalyptic London, with a heroic Hester at the center of the tale.

Four books make up the Mortal Engines quartet. They’ve yet to move the needle on the name’s use. Fewer than five girls were named Hester in 2017 – or in most years of the twenty-first century.

And yet, this is the age of Harper and Hazel. And heroine names do sometimes catch on – think of Harry Potter’s Luna. Nickname Hetty makes it particularly appealing, too.

While this name won’t be topping the charts any time soon, that might make the perfect choice for parents after a name in the key of Abigail, but far less common.

What do you think of Hester? Is this just hopelessly outdated? Or an intriguing rarity?