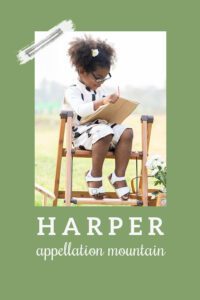 The baby name Harper first appeared on this site way back in 2008, when it ranked a mere #296. Since then, it’s reached the US Top Ten and become a go-to name for girls.

Thanks to Kayt for suggesting our Baby Name of the Day way back when, and to Leigh for requesting an update!

Once upon a time, the baby name Harper started out as a surname.

Harps date back to the ancient world. They made a splash in the medieval era, particularly in Northern Europe. Troubadours played harps as they told their tales. (And yes, harps were smaller back then.) So no surprise that the occupational surname Harper evolved, right alongside Miller and Carter.

Like nearly any surname, Harper was used in small numbers for children over the years – likely because it was a family name for many.

The runaway success of surname names for girls started with Taylor in the 1990s. Then came Madison, early in the 2000s. Along with Jordan, Morgan, Mackenzie, Kelsey, Shelby and more, the door was wide open for Harper.

We’ve also embraced musical names for girls over the years. Melody, Cadence, Harmony, and Lyric have all had their moments.

The baby name Harper sits at the intersection of both trends.

Maybe there’s even a third factor: since harps are associated strongly with Ireland, Harper might appeal to the same families who previously pushed Erin and Kelly – speaking of surnames – to the top of the charts.

By the 1990s, a growing number of girls and boys alike had received the name.

One of those children to receive the family name Harper? The future bestselling author, Nelle Harper Lee.

Lee’s first name was inspired by her grandmother, Ellen.

When she published To Kill a Mockingbird in 1960, she used her family middle as her pen name.

The book won a Pulitzer, and inspired a 1963 movie, a cinematic classic; Gregory Peck won the Oscar for his portrayal of Atticus Finch.

Of course, Harper has other associations with print and the written word. Since 1867, Harper’s Bazaar has been published in the US, a fashion magazine with global reach. Publisher HarperCollins also combines nineteenth century roots with international renown.

As for the novel? Despite finding resounding success in the 60s, it would take decades before Lee’s story would inspire parents.

The baby name Harper didn’t catch on for ages.

Paul Newman played a private detective named Lew Harper in two successful movies: 1966’s Harper and 1975’s The Drowning Pool. It didn’t move the needle on the number of boys given then name.

In 1968, Jeannie C. Riley scored her first-ever hit with “Harper Valley PTA.” The song raced up the country and pop charts at the same time, back when crossover songs were a rarity. The song chronicled a small town conflict between uptight community leaders and a carefree single mom. It inspired a movie and a television series.

While a character with the surname Harper eventually appeared, it wasn’t a given name at that point, either.

Valerie Harper became a major television star in the 1970s, graduating from The Mary Tyler Moore Show to Rhoda.

Tony Kushner’s 1993 play Angels in America did give the name to one of the female characters, and might’ve inspired a very few parents – but only a few.

ONE CITY ONE BOOK

Beginning in the late 1990s in Seattle, a grassroots movement developed into the the One City One Book campaign.

The premise: What if everyone – book clubs and independent readers, discussion groups and civic organizations – all read the same book at the same time, and then talked about it?

Mockingbird was a popular choice, picked for its focus on race, justice, and personal courage.

By the early 2000s, plenty of future parents had discovered the book on their required reading lists as students. But as they rediscovered it as adults, it seemed to put the baby name Harper on more and more families’ shortlists.

Plenty of parents have cited Mockingbird as the reason for their choice, including David and Victoria Beckham. Sales of the novel surged in the UK after the famous couple announced their daughter’s name in 2011.

More proof that the reading campaign made an impact? Atticus, the name of the main character, caught on alongside Harper.

Dozens of celebrity parents chose the baby name Harper over the years, from Shonda Rhimes and Neil Patrick Harris to Dave Grohl and Lisa Marie Presley.

Harper’s image is tailored and principled. It’s a modern name with strong, positive associations – from Lee’s novel to the instrument.

As a Top Ten name, it’s also become too popular for some parents to consider. But overall, the baby name Harper makes an appealing choice, rich with meaning.

What do you think of the baby name Harper? 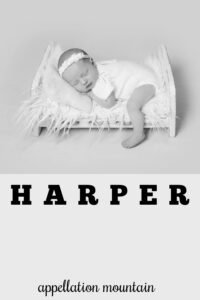