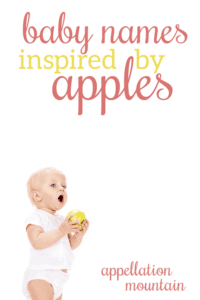 Apple baby names range from the familiar Anna and Alexander to the downright daring. After all, with over 7,500 varieties of the fruit, it’s no surprise some might be possible names for children. I’d avoid Golden Delicious and Honeycrisp, of course … but a great many feel far more wearable.

Just like favorites Arianna and Ariana, this name traces its roots to the mythological Ariadne. It’s French – both the apple and the name. It charted briefly in the US, way back in 1978. My first thought? Led Zeppelin’s “All of My Love.” Except that haunting song was released in 1979. Instead, credit goes to a French film, a perfume by Avon, a series of rockets developed by the European Space Agency, or a combination of the above.

Little wonder that someone called an apple the Crispin – crisp means pleasingly firm. Except that’s not the origin of the name; it derives from the Latin crispus, meaning curly. Saint Crispin’s Day features large in Shakespeare’s Henry V, best known for the “Band of Brothers” speech.

An ancient goddess predating the Greek pantheon, Cybele serves as the equivalent of Gaia or Rhea. It sounds something like the stylish -bell names, and brings to mind Zoe, Chloe, and Penelope, too. But it’s among the rarest names on this list – and that’s saying something!

The D’Arcy Spice apple has history, plus it brings to mind Pride and Prejudice. That makes it a romantic, dramatic name that also happens to make the list of apple baby names.

As a variety, Elise debuted in the world of apples recently. As a name, Elise feels pleasingly traditional.

Evelina follows logically from Evelyn and Eva. A lovely, surprising name, Evelina also belongs to a variety of apple, a cousin to the Golden Delicious.

Saint Everard apples take their name from a Duke of Friuli born during the reign of Charlemagne. We know Everard as Everett, but the original also appeals.

If you love names like Oliver and Henry, Franklin might appeal, too. Worn by a famous president and an animated turtle, Franklin also grows on trees, making it a great choice for apple baby names!

Party and Festival fall flat, but Gala? As apple baby names go, Gala seems like one you’ll probably find in most grocery stores. But it’s also an interesting, unexpected word name possibility. It might be short for Galilea, or maybe even Galatea, too.

Sweden’s Ingrid Bergman became a Hollywood legend. Her given name marries the fierce and the feminine. It makes a great Scandinavian heritage choice, but works for families of any background.

Jubilee shares the ‘oo’ sound of Ruby, Lucy, and Jude. A few high profile mentions of the name have put it on some parents’ radar. It sits just outside of the current US Top 1000 for girls. The spiritual associations suggest that it might work well for a daughter or a son.

A Slavic and Scandinavian short form of Katherine, this name is also spelled Katia and Katja. Kaitlyn is fading today, but Katherine remains a classic forever open to reinvention.

Apple baby names should be sweet, right? The Sweet Lilibet apple might inspire some families. The current Queen Elizabeth answered to nickname Lilibet during her childhood. It fits with all of those popular Lily names.

Marigold counts as a botanical baby name, but it is also found in the apple orchard. And, of course, there’s the Downton Abbey character.

Milo feels bright and wearable, an upbeat name with history to spare. Gibson also intrigues, and the combination sounds like a super stylish first-middle combination.

You’re probably used to seeing Molly, but the apple baby names version is Mollie with an ie. Once short for Mary, now this name stands on its own – no matter how you spell it.

Two apples are called Opal. While most see this as a gemstone name, that makes it an edible apple name, too.

You might remember Pendragon from the list of middle names other than Danger. Pendragon comes from Arthurian legend, and yes, it’s among the apple baby names, too.

Gwyneth Paltrow’s Apple inspired this post, but Jason Lee’s son Pilot Inspektor makes those same bad baby name lists. And yet we’re naming our children Jett by the thousands. And as it happens, there’s a large, stripy yellow fruit that puts Pilot among the apple baby names.

Spencer kept company with Tanner and Tyler in the 1990s, but has faded slightly since then. It makes the apple baby names list, too.

Tioga comes from an Iroquois word referring to the place where two rivers meet. Plenty appear on the map, and place names often make great choices for daring baby namers. It brings to mind Diego and Santiago, but it might work equally well for a daughter.

Poetic and preppy, Yates brings to mind William Butler Yeats. Plus, ends-in-s names are having a moment, like Brooks and Ames.

Zari fits with names like Zuri and Zoe, and yes, it’s on the list of apple baby names, too. 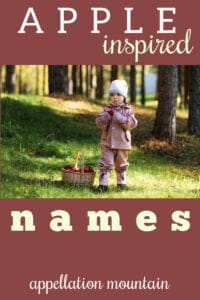 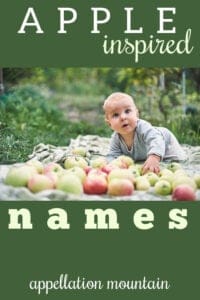