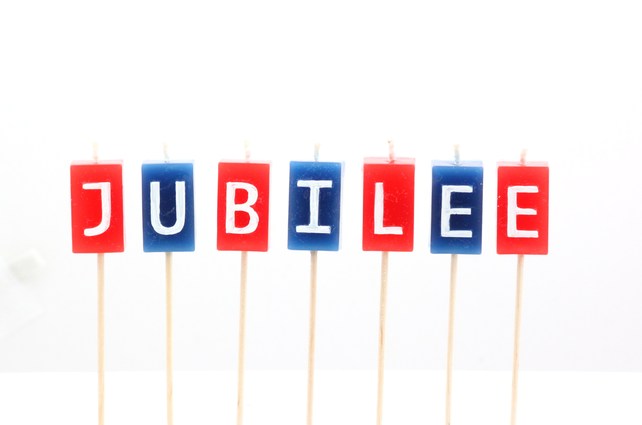 Thanks to phancymama for suggesting Jubilee as our Baby Name of the Day.

Jubilee strikes me as gender neutral.  The name reminds me of Jubal, an Old Testament name from a Hebrew word for river or stream.

But Jubilee reads feminine in 2013, thanks to reality television’s Duggar family.  Matriarch Michelle miscarried late in 2011.  The family opted to announce a name and hold a memorial service for their lost daughter, Jubilee Shalom.

They weren’t the first to consider the name.  It’s been gaining ground since the 1970s, and 103 girls received the name in 2011.  Some may come from backgrounds similar to the Duggars.  Doug Philips leads an evangelical Christian organization and is father to eight children: Joshua, Justice, Liberty, Jubilee, Faith, Honor, Providence, and Virginia Hope.

The name isn’t exclusively religious.  It comes from the Hebrew yobhel – originally a reference to a ram’s horn used to trumpet in celebration.  The Latin jubilare means to shout with joy.  Originally it wasn’t a party so much as a moment of generosity or forgiveness.  The Torah tells us they occur every 49 or 50 years.  Slaves are emancipated and property returned.

Whisper it down the alley to the Old French jubille and it referred not to the instrument or the act of proclaiming, but to the happy event itself.

There are fictional uses, too:

Jubilee has musical overtones.  African American folk songs and spirituals are sometimes referred to as jubilees.

There’s also a Moss Hart/Cole Porter musical from 1935 called Jubilee.  It was a big hit on Broadway, and songs like “Begin the Beguine” became staples.  The story was inspired by King George V’s silver jubilee, though all of the characters – and the country – were fictional, and none of them were named Jubilee.  Despite the show’s success, the original arrangements are lost and it has become a rarity.  Still, I think it lends the name a sort of vintage charm.

Travel to Las Vegas, and there’s a very difference sense to the word.  Bally’s has hosted a traditional Vegas revue called Jubilee! since 1981.  It’s not exactly risque by 2013 standards, but it is very different from the heavily religious meaning others have embraced.

All together, Jubilee is a daring word name that could wear well, with possible nicknames like Julie, Jules, and Billie.  If you’re after an attention-grabbing name with an upbeat meaning and sound, Jubilee works.