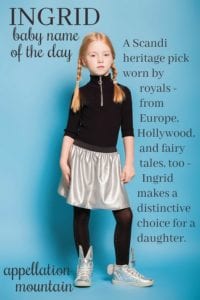 In an age of flowing, liquid names like Sienna and Ariana, Ingrid has bite.

The name comes from Old Norse. Ing – or Yngvi – was worshiped by Germanic tribes. In Sweden and Norway, the kings claimed him as an ancestor. Ing featured in dozens of names, many of which survive in Germany and Scandinavia today. Think of Ingmar Bergen, the director, or Lars Johan Yngve Lannerbäck – better known as guitarist Yngwie Malmsteen.

So that’s the first element, but what about the -rid? Turns out it means beautiful, and appears in plenty of other Scandi names: think Astrid and Sigrid, plus Frida.

Today there’s another little royal with the name: Princess Ingrid Alexandra, born in 2004, daughter of Crown Prince Haakon and Crown Princess Mette-Marit. That makes her second in line to the throne, right behind Dad.

That would make her the first Queen Ingrid. Or possibly, the second …

Despite the lovely title, she’s the villain of the piece. The queen kidnaps Kai, who remains her prisoner until his faithful friend Gerda risks all to free him from her icy clutches.

Disney planned to adapt the tale for decades. When they eventually triumphed, producing the mega-hit Frozen, the story had changed dramatically. Instead of Kai, Gerda, and a villainous queen, the story of sisters Elsa and Anna, princesses of Arendelle, emerged. Elsa became both antagonist and victim; her younger sister’s love melted Elsa’s winter-bringing spell.

So popular was the film that ABC’s Once Upon a Time incorporated it into the series’ fourth season. But this time, they gave us the sisters – Anna and Elsa – as well as their wicked aunt, the Snow Queen – also known as Ingrid.

I can’t tell if the Snow Queen had taken the name previously. Hans Christian Andersen was born in Denmark, meaning the name would have been familiar. My best guess is that Once Upon a Time invented this iteration of the character, and her name, too. Still, Disney has a way of making names stick, so I wouldn’t be surprised if future tellings of the story used this name for the frosty fairy tale queen, too.

And then we come to Hollywood royalty: Ingrid Bergman.

Born in Sweden in 1915, her name was inspired by the first princess we mentioned. The Oscar, Emmy, and Tony-award winning actor is best remembered as Ilsa Lund in 1942’s enduring Casablanca. But with a career spanning four decades, she played many an unforgettable part, including the title role in Joan of Arc and Sister Mary Benedict in The Bells of St. Mary’s.

Ingrid: By the Numbers

It seems like a few American girls may have been named after the Swedish princess, just like Bergman. The name peeked into the US Top 1000 a few times, charting in 1913, 1916, 1929, and 1935, the year the princess married Crown Prince Frederick of Denmark.

But it took Hollywood to make this name a mainstream favorite.

Bergman’s first American film was 1939’s Intermezzo, a remake of the Swedish version she’d starred in a few years earlier.

Ingrid peaked at #382 in 1967. Even then, it lagged behind softer names, the Lisa-and-Tammys that dominated the decade.

As of 2016, the name stands at #871. Not obscure, exactly, but far from common. It doesn’t necessarily fit any better with the Emmas and Charlottes of today than it did with previous generations. And really, nothing else sounds like Ingrid.

Or maybe that’s not exactly true. Astrid, fueled by How to Train Your Dragon, ranks higher, coming in at #776. But Astrid leans a little quirky, thanks to the beloved author of Pippi Longstocking.

If you’re after a strong choice, frills-free, and sophisticated, Ingrid belongs on your list. It carries the same Hollywood cachet as Ava or Audrey, but with all the gravitas of Eleanor or Iris.

Does the lack of an easy nickname deters you? There’s a solution for that, too. I’ve heard this name shortened to Indie.

Whether you’re looking for an authentic Scandinavian heritage choice, or just a strong, familiar-but-not-common name for a daughter, Ingrid has plenty to offer.

What do you think of Ingrid? Would you consider it for a daughter?

Originally published on November 9, 2008, this post was revised substantially and re-posted on May 9, 2018.