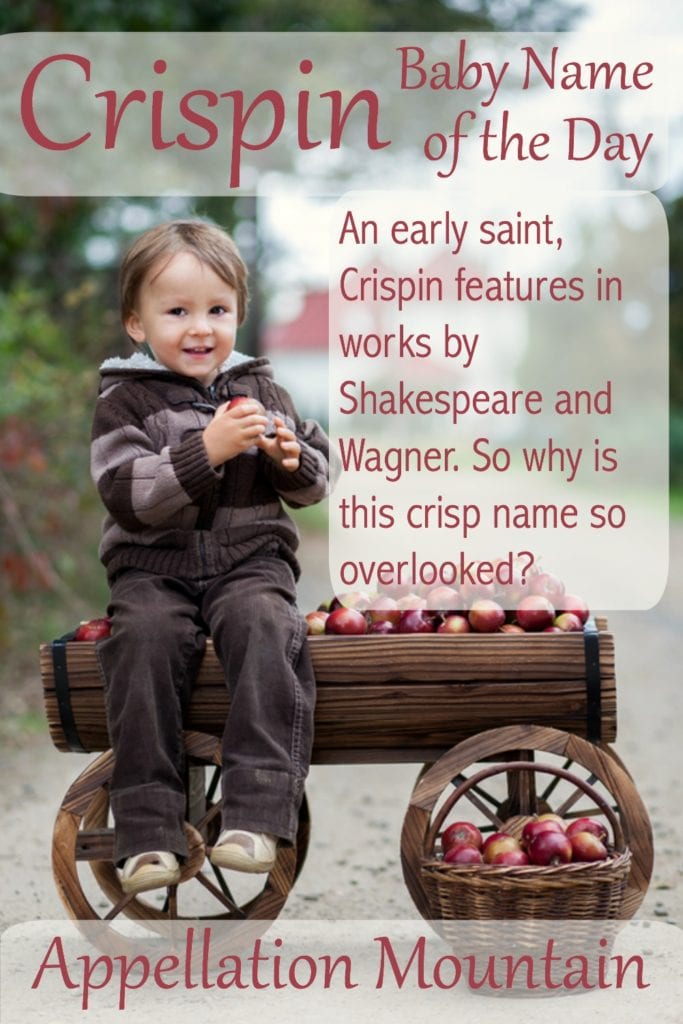 Looking for a crisp, autumnal name for a son? The saintly, literary Crispin might be one to consider.

If not for Shakespeare’s Henry V, this name might have faded into obscurity.

The play recounts actual events, including the battle at Agincourt on October 25, 1415. The king had amassed his troops, the English against the French. Despite being badly outnumbered, the English would prevail, and the battle would prove pivotal in the course of the Hundred Years’ War.

History tells us that the king made a speech. The actual words are lost, but Shakespeare wrote these words for the king:

This day is called the Feast of Crispian …

And continues that, in years, to come, others will envy their glory. Henry calls them “We few, we happy few, we band of brothers.”

Odds are good that you recognize that phrase, even if you’ve never read a line of Shakespeare.

So who was the saint commemorated on October 25th, and borrowed by the king for his stirring speech?

Legend tells us that Crispin and his twin brother, Crispinian, were well-born Roman Christians who fled persecution. They ended up in Gaul, where they worked as shoemakers and spread the gospel.

Persecution caught up with them and they were eventually martyred.

Historical evidence for their lives is lacking, but they’ve been immortalized by the Bard, and later by Wagner. Because they made shoes for their day job, they’re the patron saints of shoemakers. In Die Meistersinger, the shoemakers enter singing a song of praise to the saint.

Centuries later, a monk by the name from Viterbo, Italy was canonized. He also answered to Crispin.

The name traces its origins to Roman family name Crispinus, from the Latin crispus – curly-haired.

A handful of notables belonged to the family, including Bruttia Crispina, the wife of Emperor Commodus.

Despite history galore, Crispin remains rare. You might think of:

The name has never charted in the US Top 1000, though a few dozen boys receive the name each year.

In many ways, the name fits current trends. Chris- names are traditional favorites. Christopher ranked as high as #2 in the 1970s and 80s, and remains a solid, Top 100 favorite. Christian has rnaked in the Top 100 since the 1980s, too. And it’s old news that two-syllable, ends-in-n names for boys make popular picks.

Overall, the name sounds historic, literary, and yes, crisp. It feels like a stand-out name, though Cris blends in nicely.

If you prefer daring names that few children will share, Crispin might be a choice to consider.

What do you think of Crispin? Would you consider this name for a son?