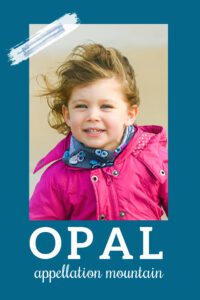 The baby name Opal owes a little to Ruby, something to Hazel, and maybe a bit to Olivia, Ophelia, and Olive, too.

Thanks to Paul for suggesting our Baby Name of the Day.

Rummaging through the jewelry box for appealing name options is nothing new.

Ruby ranks in the current US Top 100. It was big in the early twentieth century, too – back when Pearl and yes, Opal, were also popular choices. Amber, Ebony, and Coral have had their moments. And Jade recently reached new heights.

Other gemstone names might feel too flashy, like Diamond. Emerald often teeters on the edge of the US Top 1000. Topaz and Tourmaline, Peridot and Garnet have potential, but remain rare. Maybe they’re a little less name-like, or maybe they’re not quite as familiar as some of the other gems.

The baby name Opal feels more like Ruby than Peridot. We instantly recognize it as both a gemstone and a potential given name.

Opal’s roots are Sanskrit. Upala meant precious gem or jewel. The name morphed over the years to opalle in Old French and, by the 1600s, opal in English.

The stone has been in use for generations.

The Romans went wild for them. In fact, opals were one of the priciest gemstones in the ancient world.

In the Middle Ages, the opal was considered lucky. Some said they could grant the bearer invisibility.

Dozens of other associations attach to opals, but it’s tough to unravel which ones were widespread.

One thing that stands out: it’s the traditional birthstone for the month of October.

While they’re often white, that’s just the background color. Opals are known for a quality that bears their name: opalescence. It refers to the way the colors play and shift in the gemstone.

In fact, that’s sometimes why they were considered good fortune – because they combine all the qualities of other stones in one.

THE MAIDEN OF THE MIST

In 1829, Sir Walter Scott published Anne of Geiersten, or The Maiden of the Mist. It’s set in the fifteenth century. An opal features prominently in the story, but instead of good luck, it brings misfortune.

A second possible source of the stone’s shifting reputation: Robert le diable, an 1831 Meyerbeer opera based on a medieval legend about the devil’s son.

Some reports claim that opal sales cratered in Europe. But maybe that’s not quite accurate. At least, in in the 1840s, an annual collection of short stories and poems titled The Opal: A Pure Gift for the Holy Days was published in New York.

And the name’s use – at least in the US – seems to have weathered these negative associations just fine.

That’s not Mary or even Dorothy, but it’s far higher than many names have climbed.

It fell out of favor during the 1920s, leaving the rankings entirely after 1960. For a while, the baby name Opal teetered on the edge of extinction. Just a few dozen girls received the name during most years of the 1990s.

Along the way, a handful of fascinating women answered to the name.

The naturalist, author, and lecturer Opal Whiteley – probably born in Oregon to parents of modest means – long claimed to be a lost French princess.

Opal Hill became one of the first female professional golfers, and one of 13 co-founders of the LPGA.

On a similar note, Opal Kunz would become a pioneering female aviator, organizing the Betsy Ross Air Corps to support the Army Air Corps. During World War II, she became a flight instructor.

The baby name Opal feels like it’s borrowed from another time. It’s equal parts shimmering and glam and strong and sensible.

There’s a lot of story to this gemstone name, with a hint of adventure, too.

If you’re crushed that Hazel and Olive and Eleanor are so popular, consider Opal as a possible substitute.

What do you think of the baby name Opal?

Originally published on July 21, 2009, this post was revised substantially and re-published on August 11, 2021. 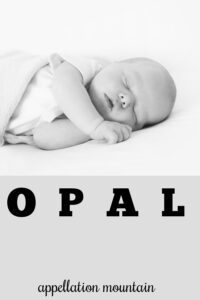