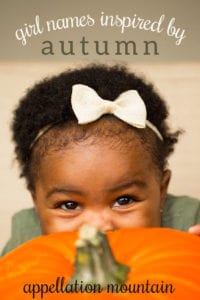 Autumn girl names begin at summer’s end, as the leaves are just starting to turn. They take us into sweater weather and pumpkin spice-everything. And then they transition into virtue names for Thanksgiving.

It’s quite the season!

If you’re expecting a daughter from September through November or so, these autumn girl names might be just right.

Yes, we all raised an eyebrow when Gwyneth Paltrow chose this edible name for her firstborn. But Apple sounds like a girls’ given name, and we love Olive and Clementine. So why not Apple? It’s among the most controversial of the autumn girl names, but no question it’s a fresh possibility.

Auburn brings to mind an appealing shade of reddish-brown, often associated with hair. Or the Alabama university known as a football powerhouse – which is sort of fall-themed, too. If we’re naming our daughters Ruby and Scarlett, Auburn seems like a logical extension, tailored and just right for this season.

Golden Aurelia is more popular than you might guess, a name from the ancient world that’s long been used elsewhere in Europe. It’s gaining again in the US, a long and lovely choice that fits with Olivia and Emilia, but still sounds fresh and new.

First came Summer, scaling the popularity charts. Autumn, appropriately enough, followed. And now Winter is trending. But Autumn feels like a perfect choice for a daughter born now, a mix of tailored word name and mainstream feminine favorite. Like many a calendar-inspired choice, it’s also a way to honor significant events tied to the season – a wedding anniversary, maybe, or a loved one’s date of birth.

Ceres sounds like series, but it comes from a different root – it means “to grow.” In Roman myth, Ceres was the Roman goddess of agriculture and the harvest. That’s why it feels like such an appropriate choice for autumn girl names. And yes, as it happens, cereal takes its name from the goddess.

Ceres’ Greek cousin, Demeter also reigned over crops and growing seasons. The meaning is much debated, but some suggest it means “earth mother.” Demetria comes from the goddess, as does short form Demi, making those two choices also possible autumn-inspired picks for a daughter.

Ember owes much to the prior popularity of Amber, as well as our love of Em- names. But it fits with autumn girl names because of other images – campfires, especially, but also hearths and fireplaces. It’s equal parts fiery and cozy.

A word name that signals the abundance of the season. Sound-wise, it’s not too far from Haven, currently a mainstream word name ranking in the low 300s.

Like Auburn, Hazel is a color name right at home in the fall. It’s a light golden brown, sometimes with a hint of green. It brings to mind leaves changing color, as well as hazelnuts. It’s also a wildly popular favorite for girls right now, a vintage pick that proves the one-hundred-year rule. After all, Hazel peaked at #23 in the early years of the twentieth century.

Not every tree name feels tied to a specific season. But Maple – with its rich red color – seems especially suited to the colder months, starting with autumn.

As names go, Oakley seems like an overnight sensation. It debuted in the rankings in 2013, and has continued to climb. Fellow Oak-names Oaklynn, Oaklyn, Oaklee, and Oakleigh all rank in the current Top 1000, too. Like Maple, Oakley is a name inspired by trees. But it’s also about the color, particularly the deep red leaves in the fall months.

Octavia means eight, so it’s often associated with August, and high summer. Except Octavia and October share a root, octo. (Way back in the day, October was the eighth month. And March came first.) All of that means that Octavia might be a subtle – but appealing – choice to suggest the season.

Vintage and subtle, Opal is a gemstone name far less flashy than Diamond or Emerald. It’s also the birthstone for the month of October, which earns it a place on this list.

Ariana is a Top 100 favorite. Oriana trades a single letter, but also a possible meaning. While Ariana comes from the goddess Ariadne, Oriana is borrowed from medieval legend. It owes its meaning to the Spanish oro and French or – gold, a color that feels just right for fall.

The slimmed down version of the Irish Orfhlaith, Orla means golden princess. As with Aurelia and Oriana, the color makes this a perfect pick for an autumn-born daughter.

A relative newcomer to the US Top 1000, Persephone owes its popularity to the success of names like Penelope and Calliope. But it belongs on this list thanks to the goddess who first wore the name. Persephone married Hades, god of the underworld, but only spent half of the year with her husband. When she returned to earth, she brought spring. And when she left to be with her husband, autumn gave way to winter. The name seems equally appropriate for spring and fall alike.

A rare name indeed, devoted royal watchers might recognize it from the Grimaldis of Monaco. Or not – it’s pretty obscure, even by those standards. Pomeline almost certainly comes from Pomona, meaning fruit, or specifically, apple. Which feels very appropriate for autumn.

We love Sage, so why not Saffron? The exotic spice’s golden color makes it feel right at home among autumn girl names.

The sparkling blue gemstone might seem better suited for winter – or possibly summer? – but it’s the birthstone for September, which earns the blue baby name a place on this list.

Siena, Italy spells it with a single n, but it’s the double-n spelling that American parents have embraced. The Italian city boasts clay with a deep red-orange color, making Sienna a color name as well as a geographic one. And that color seems just right for all things fall.

Sorrel refers to two things in the natural world: the herb, which isn’t especially tied to the season. But then there’s the color. Sorrel once referred to hair color, similar to a chestnut; now it’s most often used to describe a horse’s coat. While it’s rare as a given name, it survives as an occasional surname – sometimes spelled Sorrell.

This sweetly ecovintage name isn’t specific to the autumn, maybe. It means forest – and, of course, forests stand in every season. But there’s something about hiking and camping that feels particularly appropriate as the days grow shorter.

A traditional name with history to spare, Theresa-with-an-h was long the preferred spelling in English. But now Teresa – the Spanish and Italian form – is the only one ranked in the US Top 1000. It makes this list for its meaning: harvest. Saint Teresa of Avila’s fame spread from the sixteenth century onward, making this name well-known across Europe, and eventually throughout the Spanish- and English-speaking worlds.

Tessa started out as a nickname for Teresa and company. Today it stands on its own, a short and complete choice in the key of Emma or Stella. But it retains the same meaning as Teresa: harvest. That earns Tessa a place on this list.

As gemstone names go, Topaz is among the rarest. But the yellow rock is November’s birthstone, making it a perfect fit for this list.

Depending on who you ask, tourmaline might substitute for opal as the October birthstone. And while Tourmaline remains rare, it does seem nicely name-like.

Born Zendaya Coleman, but known only by her first, this name owes its success to the charismatic actor. Zendaya graduated from the Disney Channel to Spider-Man and then to more challenging roles, winning an Emmy for her work in HBO’s Euphoria. Her name means “thankful” in Shona, which earns it a place on this list.

Would you consider any of these autumn girl names for a daughter? What would you add to this list? 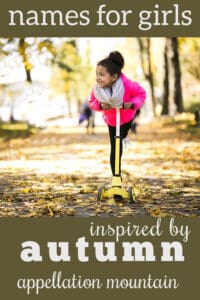 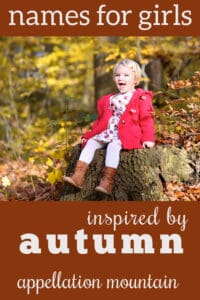