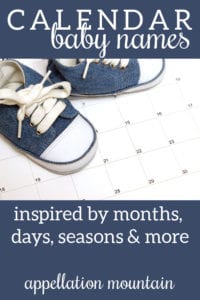 Some calendar baby names seem so mainstream we don’t notice them. Think of May or June. But many – maybe most – names drawn from dates and times of year feel distinctive and different. They often feel more like words than given names.

That’s changing, though. In the last few decades, we’ve seen celebrities choose names like Sunday for their children – that’s the daughter of Nicole Kidman and Keith Urban. January Jones put her calendar name on parents’ radar. And word names have become more common overall, making choices from Evening to Winter feel more wearable than ever before.

There are plenty of good reasons to be inspired by calendar baby names, too. Consider:

Whether inspired by months, seasons, days, holidays, or even times of day, calendar baby names combine style and layers of meaning, too.

January Jones put this name on the map for girls; her mother found it in a novel by Jacqueline Susann. It fits with three-syllable, ends-in-y names for girls, from Dorothy to Emily to Avery. Plus, we all think of Jan as a given name.

The French form of January, Janvier sounds a little like this: zhahn vee ay. That might challenge English speakers. Still, it fits with Genevieve and Juniper, and French names for girls have always been popular with American parents.

It brings to mind the enduring March sisters, of Little Women fame, but maybe this one is best for boys. March ultimately comes from Mars, the Roman god of war. It’s also the root of our word martial, which lends it an aggressive vibe – and yet, March – the first month of spring – has a gentle side, too.

Call these three the old reliable calendar baby names. April ranked in the Top 50 during the 1970s; parents of the 1920s loved June; and May was big in the nineteenth and early twentieth centuries – though the spelling Mae often ranks higher on the popularity charts.

Take gentle April, factor in names like Ava and Avery, then add a dash of pop punk style, and you’ll have Avril. The French form of April was made familiar by Canadian singer Avril Lavigne. French artist Henri Toulouse-Lautrec immortalized Moulin Rouge dancer Jane Avril, lending it an artistic vibe, too.

All of the Jul- names have had their moments, from Julia and Julian to Julianna and lately, Juliette. But July – despite sharing the same roots – is seldom heard, a warm weather name less expected than Summer.

Venerable August boasts a long history of use, from the ancient world to modern times. August Wilson makes it literary, but August feels like a modern virtue name, too. It’s far more common for boys, along with Augustus and other August- names.

We often dismiss the last few months of the year as less wearable. But maybe that’s not right. Possible short forms abound: Toby, Nova, Dex, and Demi all come to mind.

Summer and Autumn came first, but Winter is rising in use, too. Some credit goes to Nicole Richie’s daughter, Harlow Winter Kate, born in 2008. The possibility of nickname Winnie also helps.

It’s easy to imagine that no one ever used the season name Spring. Except Oscar-nominated actor turned early sitcom star Spring Byington proves that wrong.

Summer peaked just outside of the US Top 100 a few years ago. It’s warm and breezy, and it’s been around long enough that notables Summers come to mind. There’s Olympian Summer Sanders; actor Summer Glau; and 2009 rom com 500 Days of Summer, starring Zooey Deschanel as the title character.

Autumn entered the Top 100 in the 1990s and remains there still. While it feels a little 1960s, Autumn has been mainstream for ages. So much so that Autumn Kelly became the granddaughter-in-law to the Queen of England when she married Peter Phillips, son of Princess Anne.

Can’t decide if you like Summer better than Autumn? How about embracing them all by naming your child Season? Girls Gone Child made a great case for the sound and significance of this name.

INSPIRED BY DAYS OF THE WEEK

Two more day names that both count as scarcely-heard rarities.

Actor Tuesday Weld – born Susan – put the name on the map, and the Moody Blues’ “Tuesday Afternoon” gives the day a soundtrack. But this name has yet to crack the US Top 1000.

The Addams Family names were chosen for laughs. Wednesday Addams’ mom answers to the delightfully unwearable Morticia. The old Mother Goose rhyme tells us that “Wednesday’s child is full of woe,” which explains why it was the right choice for Miss Addams. And yet, Wednesday does have an intriguing sound. The television show debuted in 1964, and in 1965, fifteen girls were given the name. It continues to be used in small – but steady – numbers, especially because reboots of the original series won’t quit.

Jasper Fforde has written seven novels about literary detective Thursday Next. Despite the success of 2001’s The Eyre Affair, as well as the books that followed, Thursday remains rare as a given name in the US.

Robinson Crusoe dubbed his companion Friday, for the day of the week they met. Daniel Defoe’s novel was published way back in 1719. While seldom heard as a given name in recent decades in the US, it’s not unknown.

Nicole Kidman named her first daughter with Keith Urban Sunday, inspired by an Australian arts maven. It might be a subtle spiritual choice for some parents.

The Italian word for Sunday, Domenica, makes an intriguing alternative to romantic names like Francesca. Meanwhile, Domingo, the Spanish word for the day, makes for a masculine choice, a substitute for Santiago.

Dominic means “of the Lord.” Originally, the name was bestowed on children born on Sunday.

Doris Day lends this short, simple name a little bit of Hollywood glam. And if Kay and Jay succeed as given names, why not Day? Leighton Meester and Adam Brody have a daughter named Arlo Day.

Ev- names continue to catch on for girls, from Eva and Evelyn to rarer possibilities. Evening fits right in.

This name would be the opposite of Evening, and every bit as gorgeous – though without an obvious built-it nickname. maybe it’s more of a middle name contender.

Of course, Night is just as appealing an option as Midnight. With names like Stella and Luna so in vogue for our daughters, perhaps Night would be a great alternative for a son? Latin form Nyx is another possibility.

Names like Sunny and Sunshine have seen some use, but Sunrise and Sunset specifically relate to times of day.

When actor Rob Morrow named daughter Tu, it raised a few eyebrows. But Tomorrow makes an optimistic name – though perhaps better tucked in the middle.

Christmas was rare, but not unknown, in medieval Europe. And also in a James Bond movie – Denise Richard starred opposite Pierce Brosnan as Dr. Christmas Jones in 1999’s The World is Not Enough.

Sheryl Crow sings about “a daughter he calls Easter” in her song “Everyday is a Winding Road.” (Except “she was born on a Tuesday night.”)  It might work.

In Breakfast at Tiffany’s, Holly Golightly’s full name was Holiday. At least Truman Capote called her Holiday in his novella; it never comes up in the movie. Holiday feels like a big, bold name, but it’s also a common surname – probably originally given to someone born on a major religious festival, or holy day.

There’s no shortage of Christmas-inspired names for our children, both the expected and the rare. But Noel – the French word for Christmas – is a particularly appealing option – for a son or a daughter. 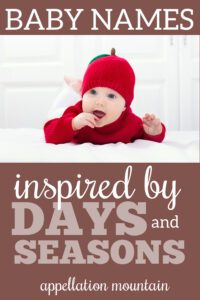 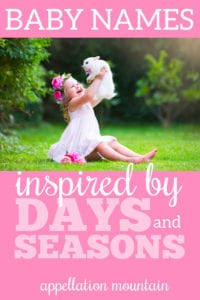