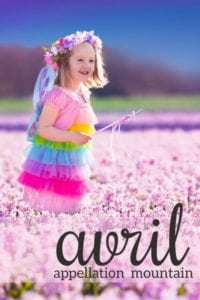 Avril brings to mind all things springtime and hopeful.

Our Baby Name of the Day celebrates the first day of April and the season that lies ahead.

This name comes straight from the pages of the calendar.

In Ancient Rome, the month of Aprilis was dedicated to Venus. It’s theorized that the word comes from Aphrodite, the goddess’ Greek equivalent. Or maybe it’s taken from the verb aperire – to open or bloom – though that seems less likely.

In Spanish, the month is called abril. It’s aprile in Italian. We’ll get to French in a minute.

What pushed the month name into the Top 100? Maybe Simon & Garfunkel’s hit “April Come She Will,” released in 1966 and featured on The Graduate soundtrack in 1967.

Another musical reference puts Avril on the map.

French-Canadian singer Avril Lavigne’s career took off following the 2002 release of Let Go. Even if you’re not a fan, odds are that you’ve heard her smash hit “Complicated” or the punk-pop Sk8r Boi.” More hits followed.

It’s her real name – simply the French word for the month.

There’s one more reference parents might think of, besides Lavigne: a dancer immortalized in the paintings of Henri Toulouse-Lautrec.

Born Jeanne Louise Beaudon in 1868 Paris, she would become a famous can-can dancer, known for her frenzied style of dance. By 1889, she danced at the Moulin Rouge, and went on to headline at the famous Jardin de Paris. Toulouse-Lautrec pained her on a poster to advertise her debut, and she went on to become internationally famous. Nicole Kidman’s character in 2001’s Moulin Rogue! is based, in part, on the dancer.

It wasn’t unknown as a surname, in France or elsewhere. Some suggest the surname’s use indicated an April birthday. Or maybe it referred to qualities associated with the month: either the changeable weather, or the sense of youth and new beginnings.

One more famous figure: English composer and conductor Samuel Coleridge-Taylor named his daughter Gwendolen Avril, but she was known by her middle name. She followed in her father’s footsteps in the 1930s and 40s, as a pianist, conductor, and composer. Avril Coleridge-Taylor became a ground-breaking female conductor.

All of this lends the name quite a bit of drama.

While it’s never appeared in the US Top 1000, it sounds like a spin on Top Ten favorite Ava, with a dash of Avery and Ariel thrown in.

Maybe we hesitate to pronounce this name. I’ve heard ah VRIL, ah VREEL and AV ril. Chances are there are more – and you’d hear every one of them if you chose this name for your daughter.

As of 2018, just 115 girls received the name. That’s fairly obscure, but far from unknown.

If you’re looking for a nature name with an edge, Avril could be exactly right for a daughter.

Do you think Avril works today? How would you pronounce it? 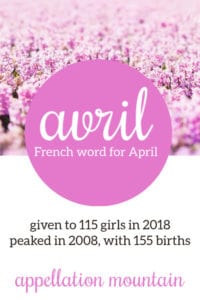