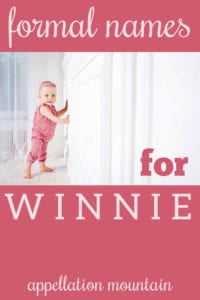 The nickname Winnie recently returned to the US Top 1000 for the first time in decades.

It fits right in with short, sparky names for our daughters. Think Sadie and Hattie.

Light night host Jimmy Fallon helped boost the name when he and wife Nancy Juvonen welcomed daughter Winnie in 2013. She and younger sister, Franny, made guest appearances on their dad’s show while he filmed from home in early 2020.

For Fallon, Winnie was inspired by Lake Winnipesaukee, a favorite New Hampshire vacation spot for the couple.

You might also think of the stuffed-with-fluff bear from AA Milne’s enduring stories, the heroine of Tuck Everlasting, or everybody’s favorite, Winnie Cooper. The late Nelson Mandela was married to fellow activist and politician, Winnie Madikizela-Mandela.

Despite so many varied uses, the nickname Winnie doesn’t attach to a single formal name. You might skip the formal name entirely, of course. But if you’d like something slightly different for your daughter’s birth certificate, options abound.

The Wonder Years forever linked Gwendolyn and Winnie, thanks to the girl next door. Danica McKellar played Kevin’s neighbor/crush/girlfriend on the coming-of-age series. It debuted in 1988 and ran through 1993, meaning that parents today almost certainly make the connection between nickname Winnie and this mythical Welsh queen. A note on spelling: the ‘e’ is traditionally feminine in Wales. American parents have long favored the ‘y’ version instead.

The Welsh gwen – fair – and frewi – peace gave us Gwenfrewi, the name of a seventh century saint. It was recorded as Winefrida in Latin, and eventually became Winifred. (Old English masculine name Winfred is quite similar.) Gently vintage, but with plenty of strength, Winifred left the US Top 1000 in the 1960s, but feels ready for revival. One notable namesake: Winnie Mandela.

A Dakota name for a firstborn daughter, Winona made a splash in the 1980s thanks to actress Winona Ryder – yes, Winona is her given name. She’s remained in the spotlight over the years, currently playing Joyce on smash Netflix series Stranger Things. Country singer Wynonna Judd hit it big int he 1990s – though she was born Christina. Regularly used from the nineteenth century into the 1950s, today Winona feels rare – but perhaps accessible, thanks to the celebrity.

A fast-rising seasonal favorite, Winter has followed Summer and Autumn up the US popularity charts. Some credit goes to Nicole Richie and Joel Madden, who welcomed daughter Harlow Winter Kate in 2008. While Winter requires no short form, Winnie works.

A Hollywood surname name, Winslet feels like a mix of Winnie and Scarlett, Winter and Juliet.

The name Edwina is teetering on the edge of obscurity. One possible reason you’ll hear it? A popular middle school musical performance choice is “Dear Edwina,” a 1990s-era production that’s still going strong. And yet, Edwina comes with built-in nickname Winnie and Edie. That’s a point in favor of this vintage choice.

If Gwendolyn works, how about other names with the same gywn sound?

You might think of Billie or even Minnie as Wilhelmina’s go-to short form, but the nickname Winnie works, too.

It sounds like the slightly better-known name Winona, except Winola is the name of a Pennsylvania lake. Locals claim that it comes from a Native American word meaning “water lily.”

A great many names on this list trace back to the Welsh element wyn – fair – including this one.

With names like Gwendolyn on the list, Lord of the Rings character name Arwen fits, too. According to Tolkien, it means noble maiden.

Another Welsh possibility, Winnie might be a more appealing short form than Bronnie.

This feels like more of a stretch, but the sound is (just about) there.

Any Firefly fans out there? Joss Whedon, namer extraordinaire, included a talented mechanic called Kaylee in his space Western. It’s not clear what inspired the name, though there’s some speculation from fans. It’s a wildly unconventional Winnie name.

An old Germanic name, it’s also spelled Hrotsvitha. Possible meanings include “famous strength” and “mighty shout.” What we know for sure is that Roswitha was a nun in tenth century Saxony, known for her writing, a mix of plays and poetry. The nickname Winnie makes this antique a little more accessible for a daughter today.

We love a good word name. Just ask all of those Winters. Winsome means cheerful, but it also suggests innocence – and perhaps naivete. But it’s a lovely, appealing sound, equal parts tailored and fanciful.

What are your favorite formal names to get to the nickname Winnie?

Originally published on September 20, 2013, this post was revised substantially and re-posted on November 6, 2020.