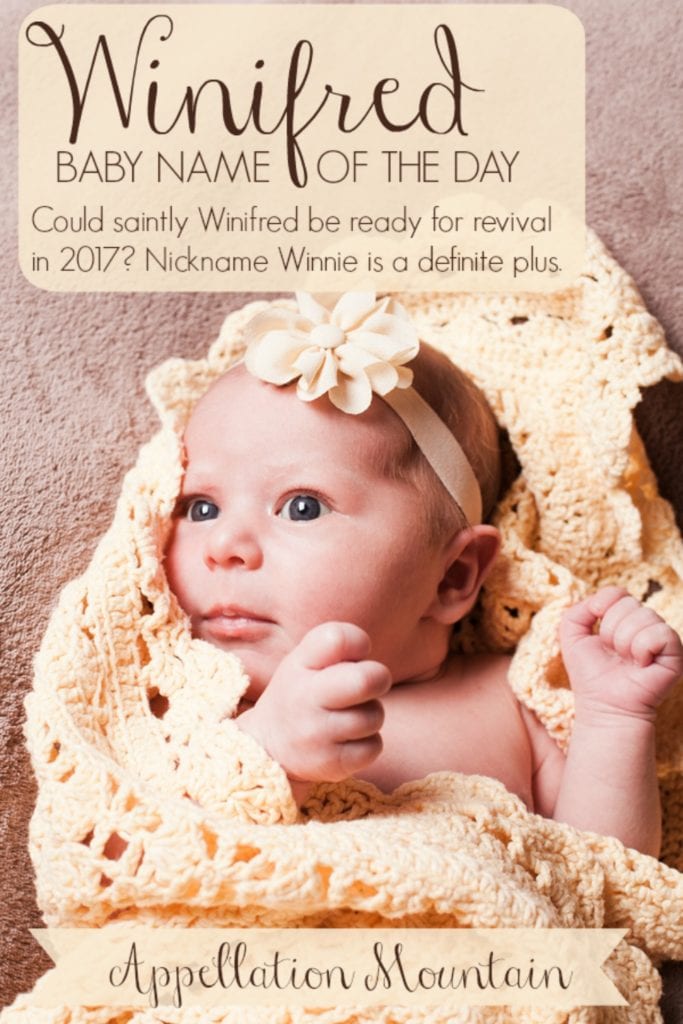 Winifred once languished in style limbo. But could this 1910s favorite be ready for revival?

If you grew up watching Kevin crush on Winnie on The Wonder Years, it might come as a surprise that her given name was Gwendolyn.

Most recently, the name made headlines when Jimmy Fallon and Nancy Juvonen named their first daughter Winnie after Lake Winnipesaukee.

In the age of Sadie, there’s no question that Winnie stands alone.

Head back farther in time, and Winnie gives way to Winifred.

In the 600s, legend gives us a beautiful maiden by the name. She chose to devote her life to God, except she caught the eye of a local nobleman. He sent flowers and sang beneath her window, but she still refused his advances. And so he lopped off her head.

As her blood spilled, a spring formed. Her uncle – a future saint himself – restored her to life and she became a nun as planned. The nobleman died shortly afterwards.

Or so the story goes.

For centuries, the mighty and the downtrodden alike have visited Saint Winifred’s Well in Holywell, claiming that the waters possess healing properties.

Unlike some tales of virtuous maidens, historical evidence suggests that a woman matching Winifred’s description actually lived. Her name might have been Gwenfrewi in seventh century Wales. The first element means fair; the second is less certain, but might mean peace.

Whisper Gwenfrewi down the alley, and it becomes the Latin Winefrida, and eventually takes the form we know now.

The name fell out of use, but the saint kept it alive. Her bones were transferred to Shrewsberry Abbey in 1138; Henry VIII destroyed the shrine in 1540.

She also appears in:

A few uses in more recent years include:

Winifred: By the Numbers

Today, the name fits right in with the next wave of revival choices. If you love Alice and Beatrice and Frances, it’s not much of a stretch to get to Winifred.

Since names often rise together – think of the Coras or the Lilys – I think we’ll hear more of both in the coming years.

What do you think of Winifred? Is it likely to make a comeback?