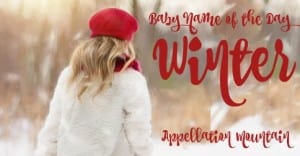 Can it be? The hottest seasonal name is also the coldest.

Our Baby Name of the Day is Winter.

The coldest season of the year takes its name from Old English. It may mean the wet season, or it may come from a word meaning white.

The start and end dates of the season vary. The mid-December solstice is almost always part of the calculation. In my part of the world, winter begins around December 21st and ends the following March 21st, give or take a day.

That’s reversed in the southern hemisphere. And the coldest parts of the world, like Scandinavia, have snow on the ground by October. In centuries past, religious feasts have been used to define the seasons, too.

Stories around the seasons are plentiful. The Greeks believed that Persephone spent half the year in the underworld as the reluctant bride of Hades, and half the year with her mother, the earth goddess Demeter. When Persephone returned to the earth, it was spring. Her descent to be with her husband ushered in the cold.

Similar stories can be found in other cultures, too.

Winter: By the Numbers 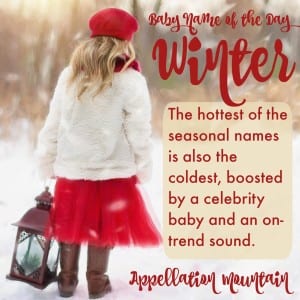 As a given name, it’s found in very small numbers as far back as the 1950s, and while it’s been used for both genders, it leans feminine from the very start.

It’s tough to say what sparked the name’s use, but here are a few guesses:

Girls’ names ending with ‘r’ are having a moment, with Harper and Piper on the rise. Winter fits this pattern perfectly, so it’s no surprise to be hearing it more often.

But the name really started to catch on in early 2008, when Nicole Richie and Joel Madden welcomed daughter Harlow Winter Kate.

The influence of the celebrity baby name is clear:

Winter succeeds as a name for many reasons. It’s a tailored nature name that could be given to a son or a daughter. Sassy nickname Winnie makes Winter more versatile than nickname-proof Summer, Autumn, and Spring.

Popular YA series Cinder features a Snow White-like character by the name, too.

And while there are downsides to the coldest season of the year, there are plenty of reasons to love Winter, too – holidays and hot drinks and sweaters and all sorts of sports.

Overall, Winter is one of those thoroughly modern word names that we’re likely to hear more of in the future.

What do you think of Winter as a given name? Do you like it better for a girl or a boy?