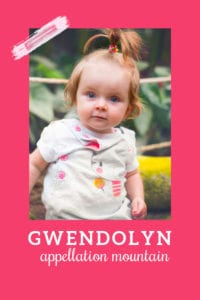 The baby name Gwendolyn started out as a legendary queen and now feels like a sparky, retro comeback pick.

Thanks to Another for suggesting our Name of the Day

In 1136, Geoffrey of Monmouth published his Historia Regum Britanniae. Despite “history” featuring prominently in the title, it’s heavy on legend, more fiction than fact.

One of this stories detailed the life of Queen Gwendolena. She overthrew her husband to rule Britain independently, circa the eleventh century BC.

Some theorize that Geoffrey stumbled across the Welsh ruler Gwenddoleu. Gwenddoleu did, in fact, live and rule in the sixth century. But he was a he. While it’s possible he claimed his throne in conflict, other accounts suggest he inherited his kingdom.

Still, Queen Gwendolena’s tale is compelling. Born a Cornish princess, she married the King of the Britons. When he put her aside in favor of his mistress, Gwendolena returned home to Cornwall to raise an army. She defeated her husband, ousted her rival, and had her stepdaughter drowned. (The name Sabrina also has its beginnings in this tale.)

It’s said the queen ruled peacefully for fifteen years, then was succeeded by her son.

Edmund Spenser refers to her as Gwendolene in his 1590 epic The Faerie Queen. Plenty of others have referred to her in literature and art over the centuries.

Even if the queen never reigned, Gwendolyn does appear to be an authentic name of Welsh origin.

After all, Gwenllian, Gwenhwyfar, and other Gwen- names appear in the historical record. It means fair. The second part, dolen, means ring.

Edmund Spenser’s Gwendolene might not have caught on, but literature eventually boosted the name.

First came Gwendolen Harleth, the heroine in George Eliot’s Daniel Deronda. Published as a serial beginning in 1876, the character is lovely and polished, but suffers much in the story.

Gwendolen Fairfax is part of one of the two couples ultimately united in the Oscar Wilde play The Importance of Being Earnest. It debuted in 1895 and has been performed – and adapted – ever since.

Gwendoline was also an 1886 opera by French composer Emmanuel Chabrier.

All of these spellings might have you wondering: which one makes the most sense?

Some argue that Gwendolen is correct. It’s true that, in Welsh, the -wyn ending is masculine and -wen feminine.

But that’s not the norm in English. So maybe it’s no surprise that Gwendolyn has always been the most popular spelling in the US.

Gwendoline – as in Caroline and Josephine – remains in sparing use. Think of actor Gwendoline Christie, of Game of Thrones and Star Wars fame.

One possible reason for some of the name’s early popularity?

Silent film star Gwendolyn Pates made a name for herself in silent film during the 1910s. Some roles credited her as Gwendoline, but the -lyn spelling seems to win out. Pates played adventurous characters – women who ran for mayor and flew airplanes, back when such things were surprising.

It’s a quality that still attaches to the name, long after Pates faded from the spotlight.

The name surfaces in Hollywood briefly, at least once more. In the 1934 college comedy Girl o’ My Dreams, actor Mary Carlisle plays Gwen. The actor would’ve been at the height of her fame then. (Oh, and get this: Carlisle’s birth name? Gwendolyn Witter.)

As the name started to crest in popularity, poet Gwendolyn Brooks was establishing herself professionally.

In 1950, Brooks won the Pulitzer Prize for poetry. It’s the first time an African-American received the prestigious award. Her career flourished in the decades that followed, and her legacy is still celebrated today. That’s particularly true in her hometown of Chicago.

Poets might not normally influence parents’ name choices, but Brooks was more than that. She broke down barriers, and transformed the baby name Gwendolyn into a hero name.

The baby name Gwendolyn appears in the US Top 1000 as early as 1880, the very first year for which data is available.

By the start of the twentieth century, Gwendolyn was climbing in use. It would continue to do so until the name peaked in the 1950s.

That should put Gwendolyn firmly in the out-of-favor category for a girl’s name right about now. The 100 Year Rule holds that it takes about a century for a name at peak popularity to fall in use, hibernate, and be forgotten enough that a new generation of parents will find it fresh and appealing.

By that measure, we should be hearing the baby name Gwendolyn increase in use sometime around 2045.

Pop culture gets credit once more.

And it hasn’t really slowed down.

For the name’s early return, we credit two famous Gwens.

First, Spider-Man gives us Gwen Stacy, full name Gwendolyne Maxine Stacy. She’s introduced in 1965, a college classmate for secret web-slinger Peter Parker. She dies tragically, but hey – this is the comics. And so Gwen returns as part of the series, time and time again. At one point, she’s even Spider-Woman … or Spider-Gwen.

While some superhero franchises languish in obscurity for years, that’s never been the case for the webslinger. And while Gwen Stacy has not always been a part of the cinematic Spider-Man universe, it’s still a factor.

More significant, though, is Gwen Renee Stefani, lead singer for pop super group No Doubt. (Fun fact: one of their early hits was “Spiderwebs.”)

No Doubt hit it big with 1995 album Tragic Kingdom. But that was only the beginning for Stefani. She’s since become a successful solo artist, a celebrity judge on The Voice, a successful designer, and all-around style icon.

One more figure that might come to mind: if you know your characters from The Wonder Years, the hit ABC series about the 1960s that debuted in 1988, then you know all about Winnie Cooper. Her given name? Also Gwendolyn.

Thanks to a mix of No Doubt and Spider-Man, the girl’s name Gwendolyn has returned to the popularity rankings slightly ahead of schedule.

But even without the pop culture boost, Gwendolyn combines some fascinating qualities. It’s a little bit bold and world-changing, but vintage and even demure at the same time.

Gwendolyn feels like a great alternative to Top Ten Evelyn, but it’s also a more accessible alternative to dramatic Guinevere. It’s a sister for Penelope or Matilda, a spirited choice with history aplenty.

Maybe it’s no surprise that this creative and unexpected name refuses to stay in the shadows.

What do you think of the baby name Gwendolyn? How would you spell it? 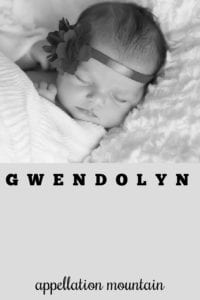 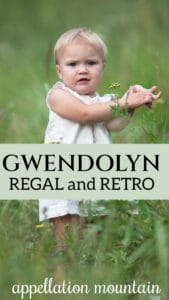