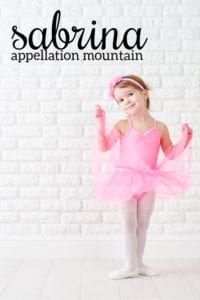 Back in 1954, Audrey Hepburn played a chauffeur’s daughter, living above the garage, watching the wealthy family her dad drove from afar. She crushed on the handsome, carefree younger brother. Then (spoiler alert) she ended up living happily ever after with the serious, responsible – but also handsome – older brother.

In the movie, her character explained that her name came from a poem.

Sabrina fair
Listen where thou art sitting
Under the glassie, cool, translucent wave,
In twisted braids of Lillies knitting
The loose train of thy amber-dropping hair,
Listen for dear honour’s sake,
Goddess of the silver lake,
Listen and save.

Milton’s Sabrina was part-mermaid, part-sea goddess. The poem was part of his 1634 Comus: A Masque.

So where did Milton find the name?

Geoffrey of Monmouth collected a mix of history and lore, publishing it as Historia Regum Britanniae around the year 1136.

The mournful tale of Habren was included.

A jealous queen had her stepdaughter, the princess Habren, drowned in the river. It’s shared her name ever since – Habren, Hafren, Sabren, or in the Latinized form, Sabrina. Legend says that her spirit dwells in the river still.

The river name clearly pre-dates Geoffrey of Monmouth’s story. In fact, the Latinized Sabrina appears in the historical record way back in the second century. Or maybe the story simply is that old, since Habren’s dad is Locrinus, descended from legendary Trojan warrior Aeneas.

Or maybe Habren pre-dates the story as a river name, or maybe even a minor goddess of sorts, long before the story of the ill-fated princess developed.

As for the river today? Hafren and Habren eventually became the River Severn in English, though it’s Afon Hafren in Welsh today. It remains the longest river in Great Britain. Rivers in Canada, Australia, New Zealand, and the US all share the name Severn today.

A WOMAN OF THE WORLD

But back to the rom com character.

Until the 1950s, this name was so rare as to be considered unknown. Fewer than five girls received the name in the US well into the 1940s.

But Samuel A. Taylor’s 1953 Sabrina Fair: A Woman of the World changed all that. Audrey Hepburn played the part a year later, earning a Best Actress Academy Award nomination.

An English glamour model took the name. (She was born Norma Sykes.) A handful of other references pop up, like a one-episode femme fatale on television Western Big Valley, a recurring character in supernatural soap opera Dark Shadows, and a newspaper editor in superhero series The Green Hornet. Sabrina Scharf – born Sandra – had an acting career in the 1960s, including a part in Easy Rider.

It was just enough to keep the name on parents’ radar.

But the biggest Sabrina of the 1960s was the bewitching teenager we met in the Archie comics. She debuted in 1962, the ward of her aunts, Zelda and Hilda Spellman. By 1971, she starred in a stand-alone comic of her own.

More on that character in another decade or two.

The name might have bounced around the middle of the popularity charts indefinitely.

Except then came 1976 smash hit Charlie’s Angels. The unseen Charlie ran a detective agency staffed entirely with gorgeous, wildly capable women. The story goes like this: despite being top of their classes at the police academy, they were assigned to clerical work and the like. But these women were meant for so much more. They solved crimes, righted wrongs, and proved themselves time and time again.

Farrah Fawcett became a household name, even though she left after the first season. The Angels’ names soared, too. Kate Jackson played whip smart Southern-born Sabrina Duncan, sometimes called Bree. A year after the show’s debut, the name had entered the US Top 100 for the first time ever, at #63.

After the Angels, it’s time to return to our favorite witch. The novice spellcaster came to life on a television series beginning in 1996. The series made Melissa Joan Hart a star, and ran for seven seasons.

Besides the enchanting television series, other influences include The Cosby Show actor Sabrina LeBeauf (she played eldest daughter Sondra), and Cheetah Girls actor Sabrina Bryan – known as Dorinda on the series.

But the mid-90s Sabrina peak is down to one thing. In 1995, Julia Ormond reprised Audrey Hepburn’s role in the movie that made this name a hit in the first place. The name peaked in 1997, at #53, almost certainly due to all the pop culture associations – but this one, above all.

STANDS OUT, FITS IN

It’s tempting to file Sabrina with Samantha and Brianna, Jessica and Brittany. And it does fit with all those 90s favorites.

But with literary origins, a tie to the glamorous Miss Hepburn, and a backstory rich with legend and lore, this name is far more than a fleeting trend. It deserves a place among the timeless names of the twentieth century and beyond. And if you’re after a name that everyone will recognize, but few children will share? This name belongs on your short list.

Do you find Sabrina dated? Or does it strike you as timeless?

Originally published on August 31, 2009, this post was revised substantially and re-published on January 23, 2020. 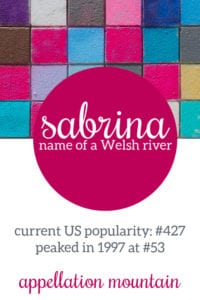