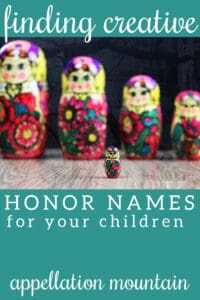 Honor names appeal to many families. They’re meaningful. It creates an instant short list. The reasons go on and on.

Except sometimes the loved one’s given name isn’t terribly appealing.

You adore your only great aunt, and would love to name your daughter in her honor. Except you cannot imagine a baby named Beulah.

Or your father is Herbert, and while you like the antique vibe, your dad hates his name, has always answered to Hank, and has forbidden you from saddling another generation with a name he considers burdensome.

Then again, you might have classic names on your family tree. But Elizabeth and William feel a little too flat and ordinary to your ear. Plus, maybe there are already three other Elizabeths and two Williams.

Some will insist that the only way to name a child after a loved one is to use the actual name. Fair enough. And family names aren’t for everyone. But if you like the idea of honoring a loved one, and you’re open to some creative name-storming, there are lots of ways to name your baby after someone – without using actually using their name.

Read on for ten great ways to reinvent honor names to make it fresh and new for your child.

10. USE ANOTHER FORM OF THE HONOREE’S NAME

Consider shorter forms and elaborations, translations into other languages, and traditional nicknames. Try looking up the name’s family tree on Behind the Name. (Enter the name. Most pages include a section for related names, and a link to the name’s family tree, before you reach the popularity statistics. Not every name has a tree, but many do.) You might be surprised by some of the possibilities.

Carol or Carl could become Caroline or Charlie. Elizabeth becomes the Italian Elisabetta or the trim, vintage Bess. William is reinvented as Willem.

This might be especially powerful if you can find a heritage choice. If you have Cornish heritage and a grandpa named George, Jory is a thoroughly modern possibility that incorporates both.

Of course, the opposite is true, too. MacArthur might feel a little forced if you’re not Scottish, no matter how many loved ones are named Arthur.

9. USE ANOTHER PIECE OF YOUR LOVED ONE’S NAME

So Great Aunt Beulah’s name doesn’t have any variant forms. But how ’bout Beulah’s middle name, maiden name, or surname? Was her maiden name Sloane? Maybe she chose Rose for her baptismal name. There could be plenty of promising options besides Beulah.

Let’s pause for a minute here and talk about something slightly controversial. If you’re naming a daughter, there’s no reason to avoid family surnames. Girls are just as deserving as boys of carrying on family names. And yet, there are those who will argue that naming a girl Parker or Jameson is stealing from the boys. That’s a decision their families can make … but it doesn’t mean you have to feel limited. A growing number of children – boys and girls – answer to names that don’t clearly announce their gender. Still, it’s worth knowing how others might perceive the name.

There’s more than one way to think about nicknames.

7. USE A NAME THAT SHARES SOUNDS or LETTERS

Plenty of unrelated names share sounds. This works really well when it’s the first syllable, like Willow Smith, named for dad Will.

But it’s not limited to first syllables. Imagine a Lawrence with a granddaughter called Wren. Or a Lauren with a niece by the same name.

Another spin on sharing sounds? If you’re honoring someone known by his or her initials, you might be able to simply repeat the initials in the next generation. Backstreet Boys member A.J. MacLean was born Alexander James. His daughter is Ava Jaymes – a name that clearly nods to dad, both with the middle and the shared initials.

And, of course, some families believe that using the same first initial is the most appropriate way to link names. Ashton Kutcher explained that Wyatt Isabelle’s middle was a nod to Mila’s grandfather, Yitzhak – Isaac.

Or maybe an anagram of a name would work. Reader Christina pointed out that Lisa’s granddaughter might be Isla. Your honor names might not be so easily rearranged, but it’s worth a try!

Mash-up names can be challenging … or charming!

Grandparents named Dave and Serena might be honored with a granddaughter Davina. Or a best friend named Emily Katherine might lead to a baby Emmeline.

5. USE A NAME THAT SHARES MEANING

Some of the most interesting possibilities come from names with a shared meaning.

Arnold means eagle, and there’s a long list of possible names that share that meaning, but have a more contemporary sound.

Margaret could have a great-niece called Daisy or Pearl.

Is your loved one a lifelong fan of a sports team? A singer?

Joseph is my great-grandfather, but the Joe Lewis Arena is where the Red Wings played for decades – and my Detroit-born husband is a superfan. A child named Joseph would have layers of meaning to his name in our house.

Huxley reminds me of one of my father’s authors, and Nathaniel brings to mind one of his favorite singers, Nat King Cole.

3. USE A NAME RELATED TO THEIR BIRTH MONTH

Your mom Geraldine was born in May? May or even Mae might be a subtle honor name.

Every month has associated gemstones and flowers, many of which make great names, especially for girls – though not exclusively.

Astrological signs can suggest name possibilities, too. If your early August-born grandmother was also the picture of a fierce Leo, naming your son Leo or Leopold or Leonidas could be a powerful way to connect their names.

It’s not just months or seasons, either. If your loved one was born on a holiday or a day with historic significance, that might also provide inspiration.

2. USE A NAME RELATED TO THEIR PLACE OF BIRTH OR RESIDENCE

Place names from your family’s past could be a great source of inspiration. What was the street name of their family home? The village where they came from in Europe? The town your mom lived in her whole life?

1. USE A FAVORITE COLOR, FLOWER, SONG, OR ANYTHING THAT BRINGS THEM TO MIND

A classic cars enthusiast might be delighted with a grandson called Ford. Maybe Beulah’s favorite color was purple and she loved violets. Violet might not have anything to do with Beulah’s name, but it can evoke her memory just as powerfully.

Have you considered creative honor names? 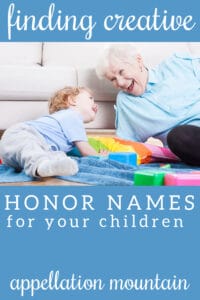 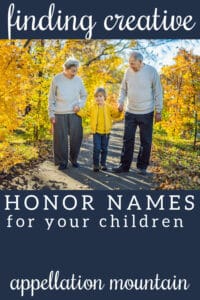