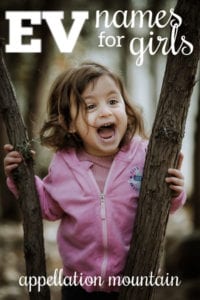 Evelyn ranks in the US Top Ten. Eva and Everly follow in the Top 100. And six more entries in the current girls’ Top 1000 start with those two letters.

But well beyond the Top 1000, even more Ev names await. Some feel like neglected antiques. Others qualify as fresh and modern. And a surprisingly number fall somewhere in between.

After all, we’re wild about V names, especially middle V names for girls. Just ask Ava and Olivia. Names starting with vowels are having a moment, too. While A remains the reigning favorite, E names for girls are also powerfully popular.

So no surprise that Ev names for girls continue to climb.

The very first woman, according to the Book of Genesis, Eve means “to live” or “to breathe.” While she and Adam were exiled from Eden, the name remains popular. Adding an ‘a’ makes it Eva, the Latin form of the traditional name. Eva has almost always been more popular in the US; plus, it travels nicely across most European languages.

The poet Longfellow wrote an epic poem titled Evangeline back in 1847. It comes from the Greek “good news.” Some find it literary; others find it religious. After all, to evangelize can mean to convert others to your faith. At four syllables, it’s among the longest girl names in the current Top 1000.

Tailored and refined, Evelyn started out as a surname. Some argue that it’s masculine, and it does have a history as a boy’s given name. But it traces its roots to Aveline, which is feminine. By twenty-first century standards, Eve and -lyn make it decidedly feminine. It entered the US Top Ten in 2017. That makes it more popular today than it was back in the 1910s, the last era the name topped the charts.

Everly brings to mind Rock and Roll Hall of Famers The Everly Brothers. But despite our love for Hendrix and Lennon, this name succeeds mostly on sound. It mixes parts of favorites like Avery and Emily, Evelyn and Kennedy. Multiple alternate spellings are rising fast, too, making this name potentially feel even more popular.

You might name your daughter Evie, just like Sadie and Millie and lots of other nickname names rank in the Top 1000, sometimes well ahead of their formal versions. But with every new Evelyn or Evanna or Evolet, there’s more potential for this nickname to catch on, just like so many girls called Maddie and Addie, or boys answering to Leo and Max.

The romantic heroine in Fanny Burney’s 1778 novel Evelina probably put this name on parents’ radar way back when. It connects to a cluster of names, including Evelyn and Aveline. While neither spelling has ever been common, both are quietly rising in use.

Yvelise might come from a 1923 romance written by Gudio da Verona. It’s probably a feminine form of the masculine Yves. The name has also been spelled Yvelisse and Ivelisse, and yes, a handful of Evalise and Evalisse entries appear in US data, too.

Girls names ending with -ia top popularity charts these days, so it’s no surprise that Evania has been heard. It might have been invented by adding the -nia ending to Eva. Or maybe it was borrowed from a video game character – or possibly a type of wasp.

Like Evalise, Evette probably comes from Yves. In French, Yvette is fairly common. The Y spelling peaked in the 1960s and 70s; Evette briefly inched into the Top 1000 back then, too. But today Evette feels like a mash-up of Eva and Scarlett, and that makes it a little fresher than the Y spelling.

It sounds close to Evian, the bottled water company. But Eviana might simply be an elaboration of Eva. After all, Ariana, Eliana, Liliana, Gianna, and Brianna are all popular for our daughters today.

From Eviana, it’s just a hop, skip, and a jump to Evienne. It takes the French ending of Vivienne and adds it to spare, simple Eve.

Evalee – no matter the spelling – looks promising. We love Rosalie and Emily and Natalie, right? But Evalee sounds a little bit like evilly, and the adverb seems to have given parents pause. Still, it’s not really the same – and a small number of girls receives the name every year.

There have been plenty of women with names like Eva Rose and Eva Marie, sometimes smooshed to Evarose and Evamarie. But Evaluna is a novelty, a night sky smoosh that brings to mind Stellaluna of children’s book fame.

Everlyn feels like a modern portmanteau of word name Ever and the ubiquitous -lyn ending. But Everlyn has been given to girls born in the US as far back as 1906, and continues to climb in use.

Ancient Evadne comes from a tragic story in Greek myth, but has a thoroughly modern sound. Evadne fits right in with all of the Ev names for girls, but also Zoe, Chloe, and Penelope. The first syllable comes from the Greek word for good – eu, just like Eugenie and Eulalia.

Plenty of Anglo-Saxon names feel unwearable today. File Eoforhild with them. And yet, it’s a name with history, and a sleek, far more wearable modern form: Everild.

You’ll sometimes meet girls name Evan, but Evanna seems to be an attempt to craft a feminine form. Evanna Lynch is the Irish actor who played Luna Lovegood in the Harry Potter movies. If it does come from Evan, then it’s a cousin to all of the feminine forms of John. Or it might have independent roots. L. Frank Baum used the name for a character in Ozma of Oz, for a daughter of the cruel king Evoldo of Ev. (Her siblings were sisters Evedna, Evella, Evirene, Evrose, and brothers Evardo, Evington, Evring, Evrob, and Evroland – that’s a post in itself!)

This seems to be a true invented name, with no consistent spelling or clear roots. Evony looks like Ebony-with-a-v. The more elaborate Evannie might be another attempt to feminize Evan. Evany, Evanie, Evonie, Evenny and Evenie are sometimes seen, too, though none is terribly popular on its own.

Neil Gaiman seems to have invented Yvaine for Stardust, based on one of the (male) Knights of the Round Table. It could be respelled with an E, opening the door to Evie as a nickname.

Evexy appeared in a Names for Real post. A meaning and origin have proved elusive. But a V and an X in your child’s name? That’s an appealing possibility for some families.

The 2008 movie 10,000 BC gave this name to the love interest, played by Camilla Belle. The movie claimed Evolet meant “promise of life,” which could be a poetic spin on the name Eve. It’s also pretty close to “the love” backwards. Before the prehistoric flick, Evalette was sometimes seen, but Evolet was all thanks to 10,000 BC. Despite the movie’s modest box office performance, this name seems poised to go farther.

A unisex name borrowed from Turkic myth, Evren sounds like so many choices on this list. But with rich meaning and symbolism, it’s among the more storied of the Ev names. The name literally means “the universe,” and the Evren is a giant snake-like creature. Pretty fierce!

Hunger Games heroine Katniss Everdeen got her surname from Thomas Hardy’s Bathsheba Everdene, the central character in Far From the Madding Crowd. While they’re very different, they both go through all sorts of trials and tribulations to win a happy (enough) ending. A small number of girls have received the name, almost certainly inspired by the YA hero.

Surname name Everett is used overwhelming for boys. But with possible nickname Evie, and the same -ett ending as Scarlett, a few parents have considered this one for their daughters, too.

Ever feels like a modern virtue name, rich with promises of all things eternal and enduring. It might also indicate loyalty. After all, it’s more wearable than something like Steadfast.

The English name of the world’s highest mountain, Everest might indicate adventure or achievement. After all, some hear it and think of scaling the heights; others think of the view from the top. Either way, it’s part-place name, part-virtue name. And while it’s rare, just like all the other Ev names, we’re hearing it more.

What are your favorite Ev names for girls? Are there any you would add to this list?

Image by olcay ertem from Pixabay 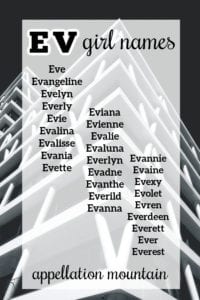 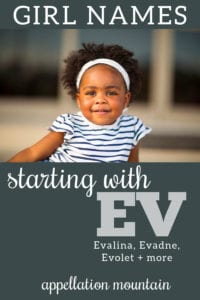