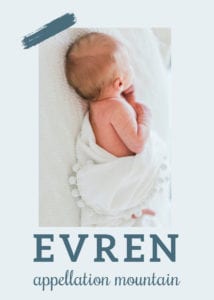 The baby name Evren combines a rich meaning with a fierce symbol: a dragon.

Thanks to Xin for suggesting our Baby Name of the Day.

We all know Zeus and Thor. Juno and Osiris. Maybe Ishtar.

But many a mythology remains relatively unknown. Few of us read Turkic myths, and there’s no equivalent of the Avengers or Clash of the Titans to bring it to a wider audience.

Turkic myth hinges less on a pantheon of gods, and more on spirits. From the 700s onward, there’s clearly a single good god, Tengri, as well as his opposite, Erlik, associated with death.

A ninth-century manuscript known as the Irk Bitig – the Book of Omens – provides much of the information we have today. It was discovered in the early twentieth century, in the Library Cave at Mogao, walled up in the eleventh century.

It’s a thrilling story, and that’s before we even get to the baby name Evren itself.

In Turkish, the name means cosmos, or the universe.

It’s a familiar meaning for children’s names. Think of Cosmo and Cosima, Giti or Tevel. It implies a sort of completeness, but also rich, unlimited possibility.

Evren also refers to a dragon. Like the tree of life or the horse in Turkic mythology, the dragon served as a powerful symbol.

It’s one easily recognized: dragons stood for power and strength.

Legend told that dragons dwell in the mountains of Central Asia. They were associated with the creator god, Tengri.

But it’s not exactly a dragon in the How-to-Train-Your-Dragon framework. Turkic myth made Evren more of a giant snake. And it didn’t breathe fire – it shot it from its tail. They’re ferocious, ravenous creatures. It can eat fifty camels in one sitting.

That makes this name a mix – ferocious and dangerous, yes, but also meaningful and symbolic.

The name tends to be listed as unisex. It occurs as a surname and place name, too, in Turkey and elsewhere.

In the US, the numbers give this one to the boys. 36 boys received the name in 2018, versus just six girls. In addition, Evren appears as a boy’s given name in the US data as early as 1998, while it takes until 2013 for it to emerge on the girls’ side.

That probably reflects the baby name Evren’s sound: two syllables, ends with n. For every Autumn and Maren, a dozen or more boys’ names fit that pattern. Plus, Everett is rising for our sons, and Evan was a long-time favorite.

Still, it’s reasonable to expect to hear this as masculine or feminine. And for every Everett or Evan, there’s an Evelyn and an Everly.

Overall, it’s easy to imagine parents liking this name for so many reasons. The symbolism and the sound both appeal. And, at least for now, it belongs among the rarest of given names in the US.

What do you think of the baby name Evren? Would you consider it for a child?