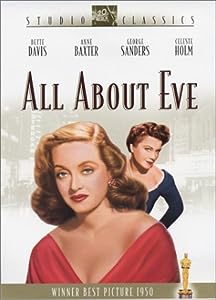 All About Eve; cover via Amazon

Editor’s note: This post was originally published on October 19, 2009, and was substantially revised and re-posted on December 31, 2012.

Thanks to Rhea for suggesting the Biblical, beguiling Eve as our Baby Name of the Day.

Flip open your Bible to the Book of Genesis and you’ll find that after God created the World, he got busy creating we little people. The first man was Adam. He gave up a rib and got himself a helpmeet.

Her name comes from either the Hebrew chawah – to breathe – or chayah – to live. (Variant spellings abound.) Some link her back to an ancient Hurrian goddess, Heba or Kheba, from as early as 2500 BC.

But we remember Eve for earning both her and Adam a one-way ticket out of paradise to the real world, replete with death and taxes and traffic jams and celebrity offspring named Apple.

For generations, parents avoided her, as well as the Latin Eva though she’s not completely unknown.  It wasn’t until the 19th century that Eva took off, helped in part by Harriet Beecher Stowe’s character in her 1852 novel Uncle Tom’s Cabin.

That’s not to say you won’t hear Eve. She features in a number of names, including:

Add all the Ev- names together, and you’ll find over 12,000 girls sharing that first syllable – less than Emma, more than Mia.  That’s not counting other ev- names, like Genevieve and Nevaeh.

Besides her sound, other associations include:

She’s been worn by a cigarette, a volcano, more than one rock band and comic book character and a few morereal people, too.

Since the 1200s, an eve has been the day preceding a feast – Christmas Eve, for example.  It lends her a feeling of hopeful possibility and anticipation.  It’s this association that makes her so wearable – she’s almost a day name.  Yet she’s as spare as Jane or Anne.  For a single-syllable, three-letter name, Eve is rich with meaning and possibility – a feminine classic to consider for the frills-free aficionado.