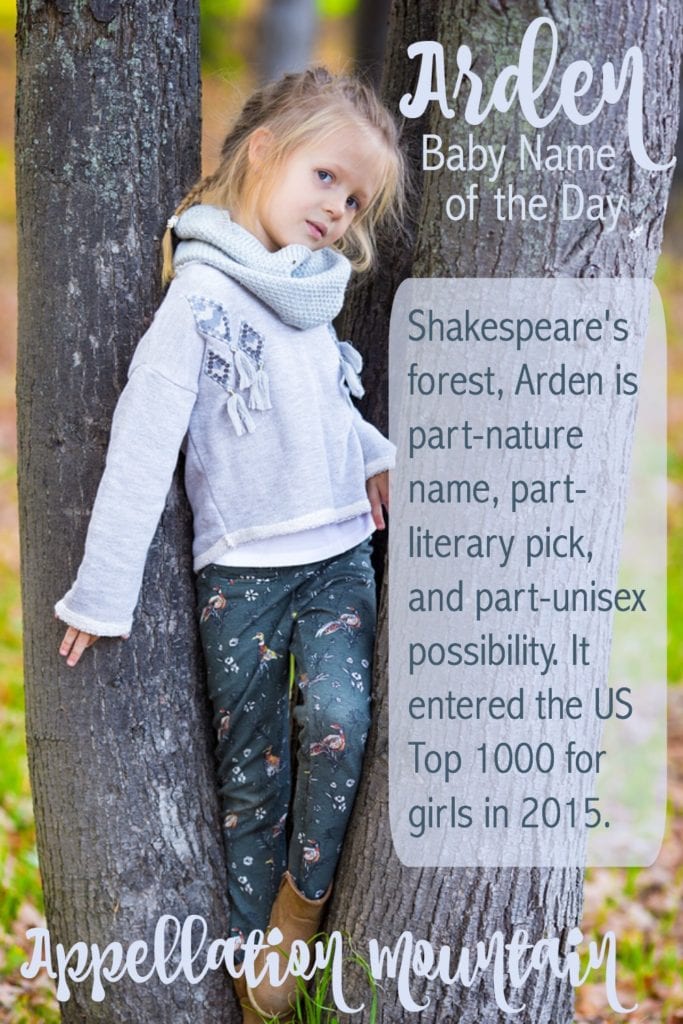 Arden offers a compromise between nature names and literary ones, with a tailored, modern style.

Thanks to Christina for suggesting our Baby Name of the Day.

William Shakespeare set his pastoral comedy As You Like It in a forest by the name. Fair Rosalind ventures into the woods disguised as a youth. Hijinks ensue, but all ends happily.

The Bard’s borrowed his fantastic forest from the real world. Two actual places answer to the name.

William’s mother, Mary Arden, was born in the first, a town in Warwickshire. Like many, she took her surname from her hometown. Mary married John Shakespeare, and they made their family’s home in Stratford-upon-Avon.

Shakespeare’s forest was already in decline during his youth. He was also influenced by the Ardennes, a forest stretching from Belgium and Luxembourg to France and Germany. An earlier writer, Thomas Lodge, set a story there. Lodge named his heroine Rosalynde. Shakespeare clearly borrowed liberally.

Both forests take their names from the Celtic ardu – high land. The latter was known as Arduenna Silva by the Romans. A draft horse is also named for the region.

All of this makes it a subtle nature name, a sister for Laurel, a substitute for Rowan.

Besides Shakespeare’s forest and the original in Lodge’s work, two additional works of fiction claim this name.

In the 1592 play Arden of Feversham, it’s a surname for a couple named Thomas and Alice. The story is more of a proto-Law and Order than a regular drama. The case was based on real life events, and the names were not changed. It was first performed in 1592, many years before As You Like It.

Arden: By the Numbers

The name has been used in small numbers for both genders for generations. Like many surnames, it started out more common for boys.

And why not? On sound, the name fits with Arthur and Aiden, Archer and Adrian. 92 boys received the name in 2015.

Pop culture pushes this one to the girls’ side.

Our Miss Brooks started out on radio and crossed to television and eventually the big screen, running for nearly a decade and becoming a major hit. Actress Eve Arden played Miss Brooks, a high school English teacher.

Florence Graham founded her beauty empire, Elizabeth Arden, in 1910. It remains a major cosmetics and fragrance company today. Graham chose her surname from the Tennyson poem.

All of this pushes Arden towards Team Pink,  and it’s no surprise that 300 girls received the name, putting it in the Top 1000 once more.

In Latin, ardere means “to burn.” Our word ardent – passionate, fiery – comes from the Latin. They’re not related, but on sound alone, Arden could be taken as a modern virtue name, a sibling for Haven or True.

Arden: Rarity on the Rise

Parents love tailored names for girls, like Harper and Evelyn. Factor in ties to literature and the natural world, and this name succeeds for many reasons.

Another reason this one might rise? A names dominate baby naming in 2016, from Ava to Amelia.

If you’re looking for a rare name that feels modern, but with history to spare, add this name to your shortlist.

Do you think this name could become the next Harper?