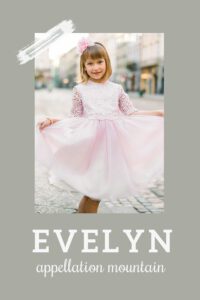 Thanks to Sara A. for suggesting our Baby Name of the Day.

BUT EVELYN IS A BOYS’ NAME

Go ahead. Shout. Yell. Throw things at the screen.

While many surnames indicate the father’s given name – think Jackson or Roberts – a minority reference the mother’s name instead.

Evelyn comes to us via the Germanic Avelina, which the Normans imported to England. It may derive from avi, meaning desired, but that’s a little bit of guesswork.

That means that Avila, Avelina, Aveline, Evelina, and even Evelyn have history as feminine given names stretching back centuries.

But as a surname, it was sometimes used as a first for men.

There’s the seventeenth century Evelyn Pierrepont, Duke of Kingston-upon-Hull. He passed his name onto a daughter, and a grandson, too.

Even back then, unisex names were a thing.

In 1661, scientist John Evelyn wrote about air pollution issues in London; he was also known for encouraging the planting of trees. Evelyn co-founded the Royal Society in 1660, working to advance science.

The first women’s college at Princeton, Evelyn College, was named in his honor. So was Crabtree & Evelyn, a body care and fragrance company.

Then came the novelist Evelyn Waugh, born in 1903. Brideshead Revisited, published in 1945, is among his best known works. Fun fact: his first marriage was to a woman named Evelyn.

So … the baby name Evelyn is a girl’s name sometimes used as a surname that eventually became unisex, before returning to near-exclusive feminine use.

At some point, it was Evelina that became all the rage.

The well-born Ms. Burney wrote her story at a time when even reading fiction was risque for women of a certain class.

But it made an impact. Evelina was a forerunner to Jane Austen’s work, and was a big hit in its day – enough that Evelina seems to have become a style star.

In the early twentieth century, the baby name Evelyn still belonged to boys some of the time. In the US, it appeared on the fringes of the boys’ Top 1000 in the early 1900s, and as late as 1930.

But the tide had turned. Evelyn clearly belonged to the girls. The name charted in the girls’ US Top 100 from 1894 onward. It peaked at #10 in 1915, but the baby name Evelyn spent over two decades in the girls’ Top 20.

Artists, writers, academics, and politicians round out the list.

It’s enough to make the baby name Evelyn feel like a modern classic.

Always ranked in the US Top 300, a steady succession of women have answered to Evelyn.

In 2010, I wrote: Ask me to name a name I think we’ll see in the Top Ten soon and this ends-in-lyn choice would be my pick.

As of 2020, the baby name Evelyn ranks #9 – slightly higher than in the name’s previous heyday.

In many ways, Evelyn is a sister for Sophia. We don’t necessarily call them classics, but they share many qualities with Elizabeth or Katherine.

But Evelyn also splits the difference between the two styles. It’s a tailored name, strong and elegant. And yet, it’s also clearly a feminine given name with history.

Other Ev- names are enjoying a moment – think Eva and Everly. That helped the baby name Evelyn rise, too, though Evelyn now outranks them all.

Spelling Evalyn looks a little more like Madelyn or Gracelyn. But it comes with history, too. Evalyn McLean was the last private owner of the Hope Diamond. (Jeweler Harry Winston bought it from the family in order to take it on tour; he later donated it to the Smithsonian.) However, Evalyn does not currently rank in the US Top 1000.

If you’re looking for a name that feels traditional, but also quite stylish, the baby name Evelyn might belong on your list.

What do you think of the baby name Evelyn? 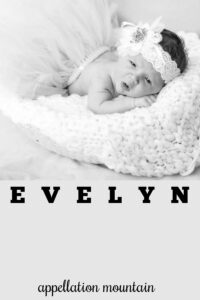