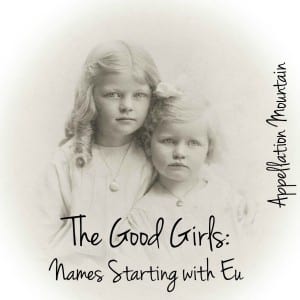 Looking for a good name for a girl?

Flip to the letter E in your baby name book, and you’ll find a long list of names that literally mean good. Good speech, good cheer, good fame, good birth. It’s a long list of good girls, and their names all start with Eu.

For years, this sorority has been neglected. Blame it on the initial sound. Eu was more “ew” than cool. But with Lucy and Ruby, Luna and Juliet and even Blue in favor, the sound is more current than ever.

There are good boys, too! Think of:

Evander is a good example of how some Eu names became Ev names over the years. They’re more current still, thanks to our affection for Ava and Genevieve and Victoria.

Read on for all of the good girl names! 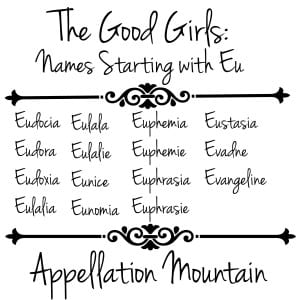 Eudocia – This name has one of my favorite meanings. It’s good plus dokeo – to think or imagine. I couldn’t dream up a better gift for a child than “good imagination.” It has a long history of use, from the ancient world onwards.

Eudora – Eudora means “good gift.” It’s one of the more widely-recognized names on this list. Credit Pulitzer Prize-winning novelist Eudora Welty, as well as Tiana’s mother in Disney’s The Princess and the Frog, voiced by Oprah Winfrey. Back in the late nineteenth and early twentieth centuries, Eudora was common enough to frequently rank in the US Top 1000.

Eudoxia – Sometimes considered another form of Eudocia, but with a very different sound. Alternately, the second element of this name could mean glory or fame. That seems appropriate, as there’s something flamboyant about Eudoxia. Doxy could be a great short form – except it’s an archaic term for a prostitute. Maybe that’s why Eudoxia has never been given to even five girls in a single year in the US.

Eulalia – Eulalia is well-spoken, from the words for good and speech. It’s a lovely name, reminiscent of Lila, Lily, and Layla with those repeating Ls. Marcia Gay Harden has a daughter named Eulala, another form of the name. Isla Fisher and Sacha Baron Cohen are the parents of Elula Lottie Miriam, but Elula seems to be an unrelated Hebrew name. Still, this might be the name most likely to catch on. 22 girls were named Eulalia in 2013.

Eulalie – Or perhaps the French form of Eulalia is even more appealing? It had a recent resurgence in France, though it is rare in the US.

Eunice – Eunice is a New Testament name, from the words for good and victory. It was once quite the fashionable name, peaking just outside the US Top 100 in the 1910s, and hovering there for years. Jazz singer Nina Simone was born Eunice. Eunice Kennedy Shriver was baby sister to JFK, and an activist for children’s health and disability issues. Perhaps she’s best known as the founder of Special Olympics. And yet, the image that dominates for many is Carol Burnett’s sketch character Eunice Higgins, a frequent troublemaker in the fictional Family.

Eunomia – Eunomia means good order. Fittingly enough, the Greek goddess by the name was the goddess of law. Together with her sisters, she was one of the Hours, ensuring that life went according to plan.

Euphemia – Euphemia is well spoken. This name is more common than some of the others, likely because of Saint Euphemia, martyred around the year 300 after refusing to make sacrifices to the pagan gods. A handful of queens and nobles have worn the name, and there are places named Santa Eufemia in Spain and Argentina. French form Euphemie is another possibility.

Euphrasia – A happy name, indeed, Euphrasia means good cheer. There’s a flowering plant called the euphrasia, though you might know it as eyebright. There are two Catholic saints Euphrasia, one from the fifth century, and another from the very early twentieth century.

Euphrasie – The French form of Euphrasia, and the given name of the Les Miserables character Cosette.

Eustasia – There’s something rather grande dame about Eustasia, but this name could shorten to the friendly – if slightly dated – Stacy, or the interesting Stacia. I’m not sure Eustasia belongs on this list – despite her ‘Eu’ sound, the meaning is usually given as either abundant or steadfast.

Evadne – It’s not entirely clear why some Eu names became Ev names over the years, while others stayed truer to their original forms. But isn’t Evadne rich with possibility? Evadne is a cousin to the Eve names, as well as Zoe and Chloe. There were at least four Evadnes in Greek myth, and plenty of bearers of the name since then. It’s a great fits-in/stands-out kind of name.

Evangeline – Evangeline means “good news” – and to evangelize is to spread the good news of the gospel. Based on 2013 numbers, Evangeline is far and away the most popular choice on the list, ranking #300. A nineteenth century Longfellow poem makes this name both tragic and literary.

What’s your favorite Good Girl name from this list? Are there others that I’ve missed?