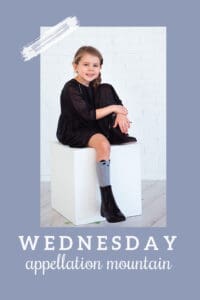 The baby name Wednesday fits in with a long tradition of names inspired by days and seasons.

But it captures our attention thanks to the delightful – and fictional – Wednesday Addams.

We all know Wednesday on the calendar. It’s hump day. Depending on how you count, it’s the third or fifth of fourth day of the week. In any case, it’s pretty much somewhere in the middle.

Now this is complicated.

Other languages, like French, call it mercredi – Mercury’s day. That sounds unrelated except the Romans understood Mercury and Woden as equivalents.

So like many of the names found on calendars, the meaning is both obvious and forgotten in twenty-first century America.

Instead, many think of the phrase “Wednesday’s child is full of woe.”

It comes from a nursery rhyme, suggesting that a child’s fate is tied to their day of birth.

Monday’s child is fair of face; Tuesday’s child is full of grace. It’s mostly Wednesday  that is out of luck. Though in older versions, that fate belonged to Friday’s child.

While written versions date to the 1800s, it’s circulated for centuries before that.

But it might be almost completely forgotten by twenty-first century parents, save for one truly unforgettable character.

Creepy and kooky, and altogether spooky, the Addams family were created by legendary cartoonist Charles Addams for The New Yorker. They first appeared way back in 1938, and remained part of the publication into the 1980s.

Like many a successful figure from newsprint, they’ve survived into the digital age. In fact, they’re thriving.

First adapted for television in 1964, the family consists of parents Gomez and Morticia, children Wednesday and Pugsley, uncle Fester, and Grandmama, plus their servant, Lurch. Other characters have joined them across the years, like cousin Itt and Thing.

The family are wealthy and vaguely aristocratic, but they’re also dark, even macabre. They’re the perfect American family, and their exact opposite, too.

But just as it had started to fade in the public imagination, along came a reboot.

The 1991 and 1993 Addams family movies starred a young Christina Ricci as Wednesday Addams.

The movies introduced the off-kilter family to a whole new generation.

According to the US Social Security Administration, the baby name Wednesday has never appeared in the US Top 1000 rankings.

And yet, the statistics clearly show that every successful version of The Addams Family has boosted this unusual girl’s name.

It remained in use, in small numbers. In 1993, following the sequel Addams Family Values, 20 girls received the name.

As animated series, a short-lived television reboot, a Broadway musical, and another pair of big screen releases, this time animated, followed.

And the baby name Wednesday slowly climbed as a popular baby girl’s name. By 2021, 112 girls received the name. That’s still uncommon, but it’s no longer all that rare.

It’s easy to dismiss a first name like Wednesday as just too different.

Except we often choose the names of months for our children: April, May, June, August, sometimes January, too. (And really, sometimes any month.) Summer, Autumn, and Winter are mainstream favorites.

Sunday and Tuesday have seen some use, too.

So why not Wednesday?

It’s worth noting that some cultures, particularly in Africa, regularly bestow names based on the day of the week – or even time of day – a child is born. For example, Balarabe is a Hausa name meaning “born on Wednesday.” It’s not the only one.

Of course, the pronunciation of the name Wednesday might be a hurdle. Except native English speakers are used to shortening all those letters to WENS-DAY.  Or is it WENZ-DAY?

The pronunciation points to some potential nicknames, too. The letters point to Wendy; the sound suggests Winnie.

But even without a nickname, this feels like an increasingly possible option.

The daughter of Rupert Grint and Georgia Groome is named Wednesday. While the Harry Potter alum might be used to the offbeat names of the Wizarding World, the reaction from the public was more positive than you might expect.

It’s too soon to call the baby name Wednesday a wearable favorite, but it might just be creeping towards the mainstream.

And now, Netflix is about to introduce Wednesday, the tale of Miss Addams at Nevermore Academy. Jenna Ortega plays the title role. If it’s popular, the show could give the baby name Wednesday a lift – again.

What do you think of the baby name Wednesday? 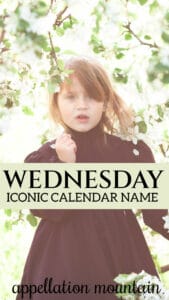 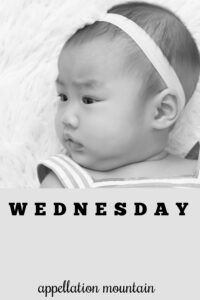