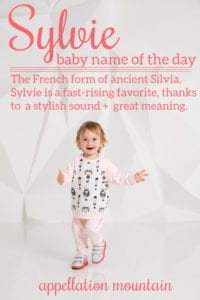 Sylvie sits at the edge of the current US Top 1000, a promising newcomer name.

Thanks to Elise for suggesting our Baby Name of the Day.

In English, the most familiar form of the name is Sylvia. It comes from the Latin word silva – forest or woods.

But it’s Silvia that brings to mind the first bearer: Rhea Silvia, a princess caught in a power struggle in the ancient world. She’s mom to twin sons, Romulus and Remus. Tragedy follows her, but the brothers triumph, founding the eternal city of Rome.

Hundreds of years later, another Silvia gave birth to the future Saint Gregory the Great. She’s considered a saint.

Probably thanks to her, the name spread across Europe. Related names like Sylvester and Silvio have seen use in the US. Sylvie is simply the French form of Sylvia.

Two Gentlemen and a Pop Star

Credit Shakespeare’s Two Gentlemen of Verona with introducing Silvia to an English-speaking audience.

Lewis Carroll gave the name to a character in a series of books called Sylvie and Bruno. She’s the princess of Fairyland.

In France, singer Sylvie Vartan’s success prompted a wave of Sylvies that peaked in the 1960s. Born in Bulgaria, Vartan scored her first hit in 1961, and kept recording hits into the 1980s. I’m kind of loving her retro sound.

The name appeals to parents for many reasons. It has that same middle ‘v’ of Ava and Ivy. And we’re in the age of nickname-names, like Josie and Sadie. Even though Sylvie isn’t a diminutive, it feels like one in English – and that might be a positive. The nature name meaning helps, too, making it a sister for Hazel, Daphne, and other ecovintage picks.

This name has been heating up on name forums for years. It’s a big favorite on Appellation Mountain, earning two coveted awards:

If name enthusiasts are gung-ho about Sylvie, it’s likely we’ll hear more of this pretty, compact name in the coming years.

What do you think about Sylvie? Do you prefer Sylvia/Silvia instead? 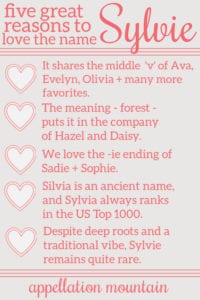