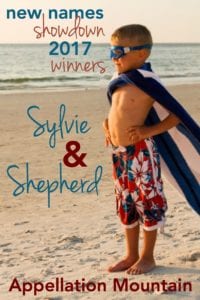 Our adventure started way back at the beginning of July with sixteen names, chosen from names new to the US Top 1000 in May 2017.

The girls’ names were drawn from this list, and included:

As for the boys, the eight names came from this list of 2017 newcomers:

By the time we made it to last week, our final contests were Maren vs. Sylvie and Jericho vs. Shepherd. All four names illustrate many of the baby naming trends we see today, but the two that won? No question they both make for stylish up-and-comers.

Congratulations go to Shepherd and Sylvie!

Shepherd won the boys’ contest easily. The name took an early lead, and maintained it throughout the week. The final vote tally gave Jericho just 24% of the vote, compared to Shepherd’s 76%.

Both names fit with modern trends: they’re meaningful, familiar but uncommon, and claim distinctive, memorable sounds. Gentle Shepherd fits with all those occupational surnames we’ve embraced in recent decades. But it also carries a spiritual meaning, since Christ is often referred to a shepherd of his flock of faithful.

I can imagine Shepherd catching on in a big way in future years. This victory suggests that I might be right!

The girls’ contest started out much, much closer. But Sylvie carried the day, beating Maren 56% to 44%.

Here’s the thing about Sylvie: the name won the 2016 March Madness Baby Names contest, too. (Sylvie beat out Clementine back then.) No question Sylvie is attracting attention from namers after something familiar-but-different. It combines the best of Sophia and mini-names like Ivy and Ava. So Sylvie’s triumph in a second Appellation Mountain contest suggests that this name will continue to climb.

2017 marks the second year we’re voted for the best of the New Names. Last year’s winners were Arden and Wilder. Wilder shows signs of rising straight up the popularity charts. It’s a little unclear if Arden will do the same.

Check back when the new data is released in May 2018 to see how the 2016 and 2017 contest winners fared in the official stats.

What do you think of the New Names Showdown 2017 winners? Would you consider Shepherd or Sylvie for a child?