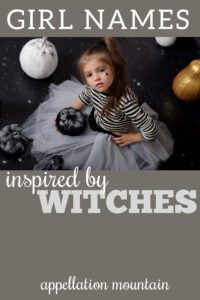 Fictional witches have worn so many fantastic names. Some, like Elphaba, fascinate – but seem like a stretch as a child’s given name.

Read on for some of the most bewitching witch names ever worn.

Have you read A Discovery of Witches?  Diana is a super-smart witch who has been trying very hard to deny that such things exist.  Until she falls in love with a vampire.  And embarks on a bunch of other adventures.  The third book in the trilogy came out in 2014, and a television adaptation followed.

We usually think of Esme as the vampire matriarch of Twilight. But Terry Pratchett’s Discworld gives us a bewitching Esme, also known as Granny. Her full name? Esmeralda Weatherwax.

The Harry Potter heroine has a great name – a stand-out Greek antique that clearly belongs on this list of witch names. Miss Granger inspired a list of names with similar qualities: Inspired by Hermione: Strong, Smart Girl Names.

There are whole posts filled with great names of Hermione’s fellow witches from the Harry Potter world.  These are just a few that come to mind.

Miss Granger’s polar opposite, Mildred is the bottom of the class at Miss Cackle’s Academy for Witches in The Worst Witch books.  Despite her frequent misadventures and clumsiness with a spell or two, Mildred is brave, kind – and generally manages to save the day.

Queen of vampire literature Anne Rice also penned a highly successful series about a family of witches, stretching back generations.  In The Witching Hour, Rowan Mayfair has grown up far away from her extended family in New Orleans, a brilliant surgeon who knows nothing about her family’s unusual past – or her destiny.

More witch names from the Mayfair family.  Some are considered villains, and others are relatively minor characters. But they make for a fascinating family tree.

Witch queen Serafina appeared in Philip Pullman’s The Golden Compass. The Fantastic Beasts series introduced us to another bewitching Seraphina, this time president of the Magical Congress of the United States during the 1920s.

The trio headlined John Updike’s 1984 novel The Witches of Eastwick.

Her full name is Alexandra Margarita Russo, but Selena Gomez usually answered to the boyish Alex on Wizards of Waverly Place. The Disney Channel series prefers to call the Russos – male and female – wizards, but it still fits with witch names.

Did you watch HBO’s True Blood? Season 4 took the mild-mannered Marnie, a practicing witch, and mixed her up with the spirit of a sixteenth century witch named Antonia. Powerful Antonia is seeking vengeance on all vampires. As a given name, Antonia ranks as a lovely, literary, and underused classic.

Strictly speaking, The Vampire Diaries – and spin-offs – focused on, well, vampires. But the long-running franchise introduced us to all sorts of supernatural creatures with some amazing names. These are just a few of the witches we’ve met.

Lifetime’s Witches of East End ended abruptly mid-cliffhanger. But the names of the Beauchamp family women definitely merit a place on this list – sisters Joanna and Wendy, and next generation witches Freya and Ingrid.

The writers chose names that were already steeped in legend, lore, and pop culture. Wendy the Good Little Witch was a companion to Casper the Friendly Ghost in comic books. And there’s a real-life medieval Swedish noblewoman, Ingrid Ylva, sometimes said to be a white witch. TV series Vikings also gives the name to a powerful woman who casts a spell or three.

The Worst Witch inspired a television show that was so successful it lasted into the college years. Then along came The New Worst Witch, featuring Mildred’s cousin, Henrietta – called Hettie. Cresentmoon – Cressie for short – is one of the few character names that feels wildly over-the-top, but nickname Cressie might be wearable.

Smallville’s girl next door Lana Lang grows up over the series’ run, and suffers some pretty unbelievable trials. During one of them, a seventeenth century French witch possesses her. The witch answers to Isobel.

The 2018 edition of Charmed gave us three sisters with M names, inspired by the origin Halliwell three. Marisol was their mom.

A young Melissa Joan Hart played The Teenage Witch on television, though the character originated in the Archie comics.

Back in the 1960s, Samantha masqueraded as an ordinary housewife, despite her status as a witch. The sitcom established the name as a go-to favorite.

Buffy the Vampire Slayer’s brainy BFF started out as a research assistant. As the series progressed, Willow learned witchcraft and joined the good fight in a whole other way.

The menace in The Blair Witch Project is named Elly, but Blair still fits on this list of witch names.

This quartet comes from 1996 high school movie/witch flick The Craft.

Eglantine comes from Bedknobs and Broomsticks, the enduring Disney flick from the 1960s.  While the story comes from an earlier book, Angela Landsbury’s big screen performance makes the name unforgettable.

Originally a series of novels, L. Frank Baum’s witches answered to lots of lovely names. While Glinda and Elphaba seem a little Wicked, Evanora stands out. The character first appeared in Oz the Great and Powerful. This Eva-Nora smoosh seems very in step with current trends.

In 1998’s Practical Magic, a heartbroken witch cast a spell preventing her descendants from a happily ever after.

Back in 1998, Halloweentown debuted on the Disney Channel. The series gave us plenty of amazing witch names. Three sequels, and even more great names, followed.

In 1942, Veronica Lake played Jennifer in I Married A Witch. Her character? A seventeenth century witch newly arrived in mid-twentieth century America. Jennifer skyrocketed in use in the years following the movie’s release.

In 1989’s Teen Witch, Louise celebrates her sixteenth birthday. The big surprise? She discovers that she possesses some serious magical powers.

The Sanderson sisters of Hocus Pocus wore these three names. While the movie wasn’t a big hit in 1993, it’s since become a cult classic.

The friendly witch, friend of equally un-threatening ghost Casper, came out of the comic strip.

Would you consider any of these witch names for a daughter?  Are there other names that should be on this list? 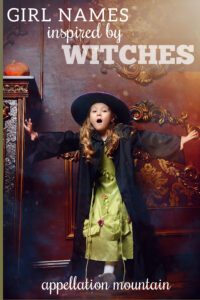 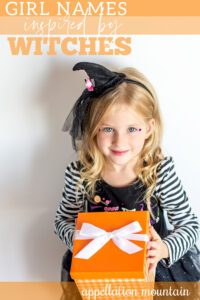