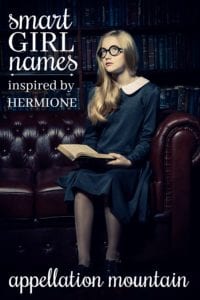 In the Harry Potter series, JK Rowling gave us an unforgettable trio of heroes. The two boys, Harry and Ron, answered to solid, English names. You might even call them unremarkable.

Meanwhile Hermione Granger, the smartest witch in all of Hogwarts, was given an unusual name nicely suited for the Wizarding World – even though she was the daughter of dentists.

From the trio’s very first adventure, Hermione showed tremendous courage, keen intelligence, and an admirable devotion to doing the right thing – no matter how daunting.

We admire her brilliance, but she’s also remarkably confident. Hermione knows the answers are waiting, if you only head to the library. And she never shies from the hard work required, even when it means risking expulsion from Hogwarts – or leaving school a year early to save the world.

ABOUT HERMIONE: THE NAME

Hermione comes from the name of the Greek messenger god, Hermes. He was fleet of foot and associated with good fortune. The god protected travelers, merchants, and thieves. There’s a Hermione in Greek myth, too, daughter of Helen – she of the face that launched a thousand ships.

Shakespeare gave the name to a character in The Winter’s Tale. His Hermione is admirable; and though she suffers mightily, remains virtuous and beautiful.

A handful of women have worn the name in real life, more in the UK than the US. But it was a rarity indeed when the world first encountered the whip-smart witch.

So what makes for names inspired by Hermione?

They’re offbeat, unexpected, brainy, and strong. Vintage, but not delicate. They convey the potential for achievement – heroic acts, if necessary, but also more conventional ones. After all, Hermione grows up to be professionally successful while surrounded by loving friends, and a close-knit family.

Names inspired by Hermione need to convey all of that potential.

The name of an ancient virgin martyr, Agnes languishes at the back of the antique shop. But signs suggest this name could be ready for revival. Jennifer Connelly and Paul Bettany welcomed daughter Agnes Lark in 2011. Short form Aggie could follow Addie and Abby into wider use, too.

Boosted by a British princess as well as characters like Mo Willems’ Trixie of Knuffle Bunny fame, Beatrice occupies the space formerly owned by Charlotte – a go-to name for parents seeking something enduring, but not as expected as Elizabeth.

An ancient name that feels equally right for a hero or a villain, Claudia fits right in with stylish -ia enders like Olivia and Amelia. A generation grew up with Party of Five’s Claudia, a violin-playing prodigy – something that seems quite Hermione-like.

A New Testament name with a certain Puritan vibe, Damaris has actually been more popular in recent years than you might expect, charting in the US Top 1000 every from 1992 to 2011. It’s pronounced DAM er is, not the more delicate da MER is. But then, a little pronunciation confusion never hurt Hermione.

An Old Testament heroine, a former First Daughter, and the name chosen by Material Girl Madonna when she embraced the study of Kabbalah, Esther has always been in the public eye. It’s also rarely been out of the US Top 300, and feels rather stylish today. Like the chart-topping Stella, Esther can be linked to the word star.

Fern makes for a homespun choice when compared to showier botanicals like Violet and Rose. It’s also the name of the girl who so famously saves little Wilbur in the novel Charlotte’s Web. Call Fern a no-nonsense nature name with a stripe of the heroic.

Greta comes from Margaret – definitely a smart classic for a daughter – but it stands on its own. The gruff, growly Gr makes this one sound like a girl with a backbone. And Greta Thunberg seems very much like a Hermione.

Nickname Hattie has climbed the charts in recent years, leaving Harriet behind. But while Hattie feels sassy and spirited, Harriet sounds more like the Hermione name. Harriet is an abolitionist, an aviatrix, a spy. From Harriet Tubman to the fictional Harriet Vane, the women who have answered to this name are a daring, accomplished bunch – Hermiones, all.

Literary legends says that this name started out as Shakespeare’s typo – he read Innogen’s double ‘n’ as an ‘m.’ Popular in the UK and Australia, but seldom-heard in the US, Imogen feels strong, distinctive, and nicely balanced between the familiar and the unexpected.

A J name overlooked even at peak Jennifer-and-Jessica, Jerusha manages to sound modern and old school at the same time. A minor character in the Bible, this name pops up over the years in surprising places, like filmmaker Jerusha Hess – one-half of the husband and wife team responsible for Napoleon Dynamite. Jerusha’s ‘oo’ sound is right at home with current favorites like Lucy and Ruby – all while being far more rare.

An obscure Spanish saint, Leocadia feels an awful lot like Hermione. It’s a heavy name, starting with a conventionally masculine syllable, followed by a lighter, feminine ending. In many ways, they fit with the far more familiar Alexandra and Victoria. It’s an elaborate alternative to Leah, and more rooted than the equally heroic Leia.

She’s a much-married warrior queen who picked fights – and won them. Unlike many an Irish import, Maeve’s spelling and pronunciation are straightforward. Plus any name that ends with “v” has a definite edge. The Westworld character introduced even more parents to the name.

A Germanic name meaning might in battle, Matilda was the daughter of William the Conqueror. But it’s another literary figure – Roald Dahl’s young Matilda, every bit as bright as Hermione, and just as capable of standing up for good.

Hogwarts’ Professor McGonagall shared her first name with the Roman goddess of wisdom. Greek equivalent Athena is rising in use, but Minerva remains solidly in unexpected territory with Hermione. It’s sometimes connected to the Latin word mens – intellect or mind.

An old Roman family name, Octavia took on new life when The 100 gave it to a teenage warrior. The hit sci fi series chronicled Octavia’s transformation to a ruthless general, and made parents notice the ancient name. It comes from the Latin word for eight, considered a lucky number in many cultures.

Ottilie belongs to the same family as Germanic Otto, an entire group of names that feel antique and offbeat. They mean fortune, which feels nicely auspicious. It’s a name outside of the mainstream, but in a good way. Along with related names like Swan Lake’s Odette and Odile, they all feel inspired by Hermione.

For years, Penelope served as the go-to name for quirky characters. But the original Penelope of myth was clever, dexterous at her weaving – and at spinning tales to keep her suitors at bay while husband Odysseus struggled to make his way home. The 2006 Christina Ricci movie, a modern fairy tale, gave us another kind of brave Penelope.

Shakespeare’s quick-witted and kind heiress in The Merchant of Venice puts Portia on this list. Some object to the name’s porcine origins – it comes from a Roman family name meaning pig. But Portia sounds sleek and fierce, more like a sound-alike Porsche. Other Shakespearean names, including Jessica and Olivia, have found favor in years past, so why not Portia?

Popularized by a nineteenth century novel, today’s parents probably think of Beverly Cleary’s enduring child character, Ramona Quimby. She doesn’t face down an evil wizard, but she does get a novel titled Ramona the Brave. She’s imaginative, destructive, and incredibly appealing – in her own way, very much a Hermione. Actors Maggie Gyllenhaal and Peter Sarsgaard gave this name to their daughter in 2006.

Nearly as rare as Hermione, medieval Rosamund was worn by an ill-fated queen of the Lombards, immortalized in art and literature. While her association with the Latin phrase rosa mundi implies prettiness, the sound is downright different – the kind of mix of the beautiful and the heavy that defines a Hermione.

Steadily popular in Scandinavia, Sigrid comes from Norse elements meaning victory and beautiful. It sounds just a little bit harsh, though nickname Siri – as in Apple’s AI assistant – softens it. Fellow Scandi names Astrid and Ingrid could fit with this list, too, but for sheer obscurity, Sigrid beats them both.

A feminine form of the Norse god Thor, literally meaning thunder, Thora sounds sharp and distinctive. Worn by a queen in Norse myth, indie actor Thora Birch has helped put this rarity on the map. While we’ve embraced Nora, Cora, and maybe even Flora, Thora remains outside of the mainstream.

Sometimes heard in the nineteenth century, Theodosia sounds like Hermione’s kid sister. It’s almost too elaborate to wear. Still, Theodosia seems just on the right side of manageable, and Hamilton: The Musical grounds this name in American history, while giving it a sweet lullaby.

Yes, Ursula is the scheming sea witch who makes Ariel a deal in The Little Mermaid. And she’s Phoebe’s evil twin on Friends, too. Put all that aside, though, and Ursula is a Hermione. It comes from a Germanic name meaning bear. Legend tells us of a legendary princess-saint who led an ill-fated pilgrimage to Rome somewhere between the third and seventh centuries, depending on the account. It all makes Ursula seem strong and noble.

With connections to the Russian word for faith and the Latin for truth, Vera is the kind of choice that shines with significance. Oscar Wilde gave the name to a Russian barmaid turned assassin in an 1880 play. It’s rising in use, taking it almost out of Hermione territory, but remains richly meaningful.

Far longer than compact, literary Willa, Wilhelmina feels regal and antique. It shares William’s tough meaning: protector. It was worn by many a royal, including a long-reigning Dutch monarch. Queen Wilhelmina of the Netherlands became queen at the age of ten, reigned through two World Wars and an economic crisis, before ceding the throne to her daughter.

Those are my picks for girl names inspired by Hermione. What would you add? 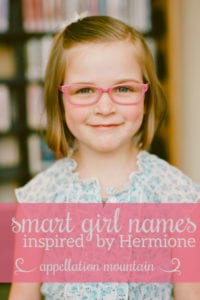 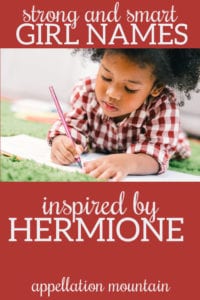