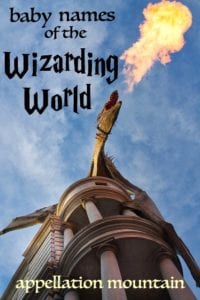 I’ve written an awful lot about Harry Potter baby names over the last few weeks. But here’s a puzzle: how about the names of ordinary witches and wizards, far removed from the tumultuous events at Hogwarts?

If you were dropped into Diagon Alley right now this minute, what would your Wizarding World name be?

You can find your Harry Potter name below, but here are my observations on Wizarding World baby names.

Here’s a quick primer for the two or three readers who can’t picture Diagon Alley and Platform 9 3/4 like it’s right down the street.

In the universe JK Rowling created, wizards and witches are born magical. Most of the time, at least one of their parents is also a witch or wizard, so this doesn’t come as a complete shock. But they can be born at random. Those of us in the non-magical world are called Muggles in the UK. (We eventually learn that Americans refer to us as No-Majs.) Muggle-born witches and wizards can be every bit as talented as “pure-blood” children from long lines of wizarding families.

There’s a sharp divide over blood. Some feel strongly about marrying within the wizarding community, and those concerns can sound downright racist. Others, including the legendary Hogwarts headmaster, Professor Dumbledore, take a much broader view. The books make it clear that the debate isn’t new.

The tension is clearly reflected in the names chosen by some of the series’ main families, and I mention it because the impact on naming is clear.

Not every name would be out-of-place in the non-magical world. We Muggles use names like Harry and Ron all the time. In fact, part of Harry’s appeal is that he’s so ordinary – until he isn’t.

But it’s not just the title character with a regular Joe given name. The Weasley family includes Harry’s BFF Ron, his parents Arthur and Molly, plus siblings Bill, Charlie, Percy, Fred, George, and Ginny. They’re fairly standard-issue names, even though the Weasleys are magical on both sides, dating back as far as anyone can remember.

Despite their pure-blood pedigree, it’s worth noting that Arthur Weasley is fascinated by the Muggle World. Neither he or Molly understands it especially well. But perhaps that explains their choice of mostly homespun, mainstream English names. They do have family names that lean magical, like Ron’s full name: Ronald Bilius, the middle name honoring an uncle.

Harry’s wizard-born dad was named James, but James’ father answered to Fleamont. So even within families, there’s sometimes quite a bit of variation across generations.

Other names mentioned in the series fit this category: Susan, Amelia, Oliver, Teddy. That last one comes straight from a Muggle grandparent, suggesting that as long as the worlds overlap, so will some of the names.

Look a little closer, and some of the Weasley names are stand-outs. Ginny is actually Ginevra, a thoroughly magical choice. One possible origin for the name? The Italian word for juniper, which makes this a subtle nature name – and puts it into another category entirely.

In fact, the majority of Wizarding World names stand out. When’s the last time you met anyone called Hagrid, Albus, Mundungus, Lavender, or Bellatrix in real life?

But precisely how they stand out? That’s what makes them Wizarding World baby names.

A handful of characters receive straight-up family names. Harry uses them for his own kids; there are a examples in the Weasley family and elsewhere, too.

But the more interesting practice is found in those wealthy, and often snobbish, aristocratic families, the Blacks and Malfoys and LeStranges, concerned with protecting their heritage and being as non-Muggle-like as possible. While these families sometimes repeat names, the most interesting practice is the use of celestial names, drawn from the night sky.

Think stars and constellations, along with the occasional galaxy or other borrowing from astronomy. From Rowling’s perspective, maybe it’s practical – there’s a nearly limitless supply of unexpected names that still manage to sound very much like given names.

But it’s also realistic, isn’t it? Some families stick to saint’s names or literary ones, names that reflect their love of the outdoors or their heritage. Given how the old families overlap and inter-marry, it’s a Wizarding World name trend that became standard practice.

Another big source of names? Mythology. That’s true for us Muggles, too, of course – we’ve been naming our daughters Diana for years, and choices like Atlas and Odin are trending, too.

But the names favored in the book series tend towards the more obscure. There’s Cadmus, the first King of Thebes, and Pomona, a Roman goddess of abundance.

Muggles love a good nature name. Harry Potter’s mum, Lily, didn’t know she was a witch until the owl arrived with her letter to Hogwarts. But her name fit right in with Lavender, Poppy, Pansy, and so many other botanical names that repeat among Rowlings’ characters. 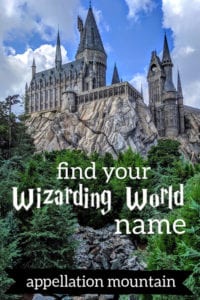 Another big category of names? English go-tos of an era long since past. Cedric, Arthur, and Millicent could pop up in your average neighborhood. But Cuthbert, Caradoc, or Bathlida? Some of them fit right in with names borrowed from myth and legend. Others are just plain old school.

Just like Muggle names mix into the magical world, other influences make their mark, too. Modern Britain became more global, and characters with names like Parvati took their place in the English Wizarding World community.

Of course, European names are everywhere. Whether you apparate or travel by floo network, you’ll meet witches and wizards across the continent. Some even make their way to Hogwards, like Viktor Krum and Fleur Delacour – the latter of whom eventually marries into the Weasley family, and helps introduce some French flair to the names of the next generation of Weasley children.

They’re called Muggle-born, but really they’re immigrants, newcomers to a world they never knew existed until Hogwarts acceptance letters changed everything. That was true for Lily Evans Potter, whose nature name fit right in. Hermione, too, was the daughter of dentists, but with an unusual ancient name, no one would think it.

Others, though, like brothers Colin and Dennis Creevey, remind us that a great many conventional names make their way into the world thanks to new arrivals.

The stories now span two continents and nearly a century of history. (The first Fantastic Beasts movie takes place in 1926. Harry starts Hogwarts in 1991. That puts the 19 years later epilogue, when we first meet Harry’s kids, in 2017. And a few years after that, we have the events of The Cursed Child.

And yet, it’s not possible to glean much about trends in Wizarding World baby names. Bill and Fleur name their firstborn Victoire, honoring mom’s French heritage, as well as the events of the Battle of Hogwarts. But most of the other names would be at home at any point in the world we know, from Theseus Scamander – we met him in the most recent Fantastic Beasts movie – to Scorpius Malfoy, from The Cursed Child.

Which makes it easier, I think to find your Wizarding World name! See below – and please tell us how to properly address you should we meet in Hogsmeade! 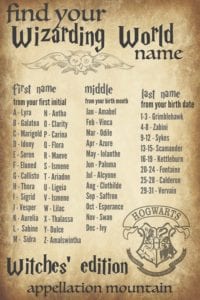 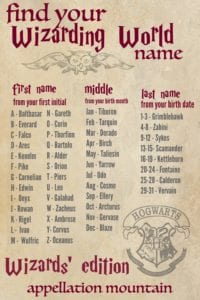