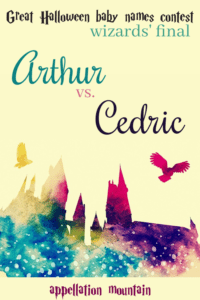 This year, all of the names come from the Wizarding World of Harry Potter. We started out with twelve magical monikers, but have reduced them to just two finalists, thanks to your votes.

Both of our finalists are good guys, through and through. One appears in every single book and movie; the other only becomes a big deal in a single book from the original series – though he cameos right up through the end.

Care to hazard a guess?

Arthur bested Alastor, 68% to 32%. The legendary, regal name has fared well in other contests on the site. It won March Madness 2012. It’s not a huge surprise that it bested the rare Alastor.

In the second match-up, Cedric triumphed over Phineas, 52% to 48%. It’s a slim margin. That probably reflects how much we just plain love Finn names these days. But despite Cedric’s early – and tragic – demise, he and his family continue to feature in the story line, right up through The Cursed Child.

We’re not voting on the characters, of course – this is all about the names. Cedric hasn’t cracked the US Top 1000 in years, and it continues to fall in use. Arthur, on the other hand, has nearly doubled in use over the last five years, and looks to be making a comeback. Still, they’re both sort legendary, literary types, rather dashing, and strongly associated with JK Rowling’s enduring series.

Which name will claim the title of Great Halloween Baby Names winner 2018? That’s up to you!

Arthur faces Cedric in the final showdown of this year’s contest.

This round will remain open until Tuesday, October 30th. That’s not much time at all! Check back and learn the winners on Halloween 2018!

PS – Don’t forget to vote in the witches’ round here.