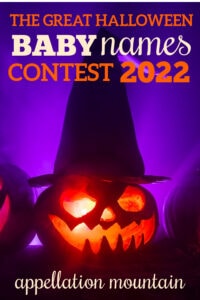 The Great Halloween Baby Names contest serves up some delightfully spooky October fun. We’ve voted our way through witches and vampires, Harry Potter names, and more over the years.

Along the way, we’ve chosen many a frightful favorite:

This time? We went literary, with names borrowed from the works of Edgar Allan Poe.

Our contest started with sixteen names, all feminine, though not exclusively from Poe’s scariest stories. (Among other genres, Poe pioneered modern detective fiction.)

Across the weeks, we reduced that list from 16 to eight to four to just two finalists.

And now, we have a winner.

With a decisive 61% of the vote, Eleonora joins Winifred, Luna, Arthur, Rafael, and Sabine in the champions’ circle. It knocks out runner-up, Camille.

Eleonora isn’t one of the better known Poe characters, but she’s an intriguing one.

The short story “Eleonora” was first published in 1842. Unlike nearly every other Poe tale, the ending is almost happy.

An unnamed narrator lives in a paradise, chock full of vibrant birds and flowers. (Think flamingos.) He falls madly in love with Eleonora there, only to have her become sick and die. The heartbroken narrator leaves paradise for a city, where he falls in love again and remarries. Instead of more heartache, the narrator is visited by his late wife, who gives her blessing to the match.

So it’s ultimately sad, and maybe a ghost story, too, or certainly one with plenty of tragedy – not exactly a departure.

Eleonora is a name both romantic and haunting, but also just the tiniest twist on mainstream favorites. It updates Eleanor and Isabella at the same time.

As it happens, Eleanora – note the minor shift in spelling – returned to the US Top 1000 this year for the first time since 1939. Eleonora with the O is big in Italy, but it’s never been especially popular in the US.

So that makes this year’s winner of the Great Halloween Baby Names contest an undeniably on-trend pick.

What do you think of Eleonora? Does it give you an Edgar Allan Poe feel? And, of course, which spelling do you prefer?