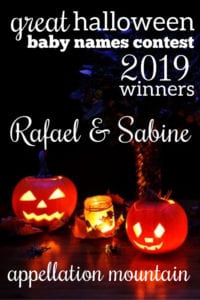 The winners are in for this year’s Great Halloween Baby Names contest.

But before we talk about this year’s results, let’s look back at the last few years.

For the third iteration of this contest, all of the names came from the CW’s long-running Vampire Diaries series, as well as two spin-offs, Legacies and The Originals.

The contests weren’t nearly as close as I thought they might have been.

On the boys’ side, Rafael handily defeated Enzo, with just over 60% of the vote. I think both sound just right for vampires – though Rafael is actually a werewolf we meet in the first season of Legacies. I think it sounds sleek, vaguely European, and quite handsome. Cheerful nickname Rafe makes it even more accessible.

The girls’ contest surprised me! Sabine took an early lead over Sybil, and ended the victor, with not quite 52% of the vote. That’s still pretty close. Like Rafael, Sabine strikes me as sophisticated and continental. And while the name is recognized in American English, it’s seldom heard. Once again, Sabine is not a vampire – she’s a witch, living in New Orleans, when spin-off The Originals begins.

Something else that strikes me about the names? I can hear them on siblings. They’re quite well-matched, which it’s quite as true for last year’s winning pair, Arthur and Luna. Also, something about Rafael and Sabine makes me sound just right for the season.

So it’s quite a satisfying outcome! Thanks to everyone for voting and following along.

Did your favorites win? Would you consider either of these names for a child?